One of the hardest things about fall semester ending is knowing that this is my last time sitting standing in the student section at football games. With a crazy past season involving some major disappointments and the midseason firing Kiffin at LAX, these past few football games have been exciting as Coach O and our team made a comeback. Despite our few past successes,  I was still nervous our homecoming game against Stanford. As a senior, I have never seen USC beat Stanford--and if we lost, our class would only be the third class in the history of USC to have never seen at least one win against Stanford. 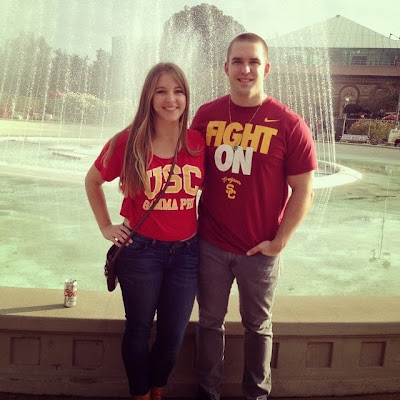 My goal going into game day was to get the best seats possible since this game was going to be special for a few reasons. One, Scott was here! I had bought him a student guest ticket early in the summer, and we had no idea how lucky we were about to be for choosing this game. After coming to a home game last year and getting some pretty terrible seats, Scott and I wanted to be as close as possible to the field. Two, this felt a little bit like my last real game. The only other home game would be against UCLA over Thanksgiving so many students would be home and frats won't necessarily be tailgating. I've never really put much effort into getting great seats, so this last game with a sold out Coliseum was my last chance. Scott and I left an hour and a half early to grab seats and were very happy to snag the sixth row in the student section. I was very excited for the game to start and to watch it from our seats. 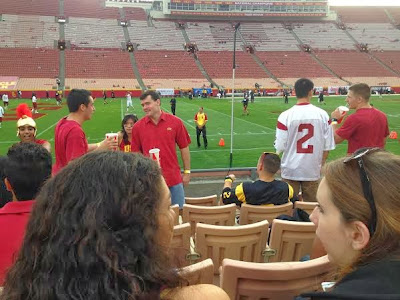 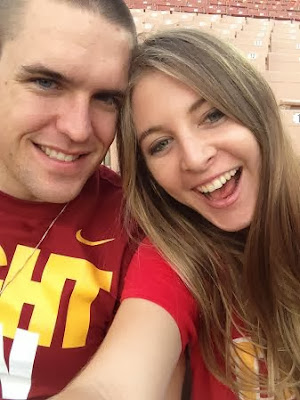 After defending our seats from the crowd, the game was finally about to start and our friends all made it. The energy in the Coliseum was already crazy within the first quarter as USC went from being ahead and tied a few times as everyone realized how crazy this game was going to be. From our new Coach O chant (my favorite) to the "All We Do is Win" dance, this game was spent on our feet and screaming the entire time. It's rare that I get this invested in a game, but this was hands down the best football game in my life and I felt every emotion from excitement, anxiety, proud (Marquise won my heart when he went back in to get the last yard after being injured), and overall just amazed that Scott was here next to me for such a great game. 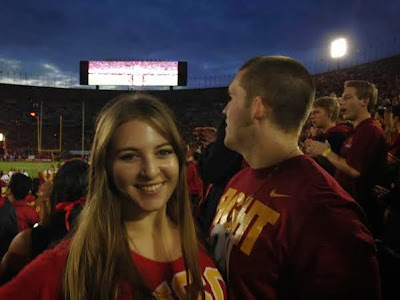 We won in the last 19 seconds by 3 points and the entire stadium freaked out. We quickly saw that all the students were going to rush the field, and being so close it wasn't really an option to opt out--and we didn't want to. After a jump off of the concrete wall (which I did more gracefully than I expected), I ran hand in hand with my friend Andrea to the middle of the field and joined in the USC and we are SC chants while not so cutely crying with happiness. 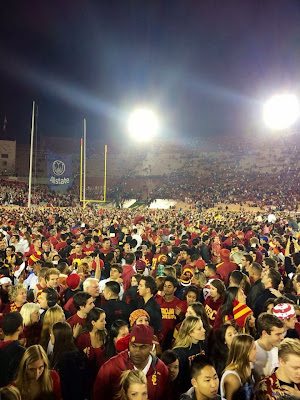 I also quickly realized I had lost Scott in the process of jumping walls, but he ended up having an even more ridiculous adventure of his own. Luckily we managed to meet up by our seats, and headed back to campus to celebrate--aka pass around a handle of Fireball between a group of 12 people before Scott had to drive back (he opted out of the drinks). 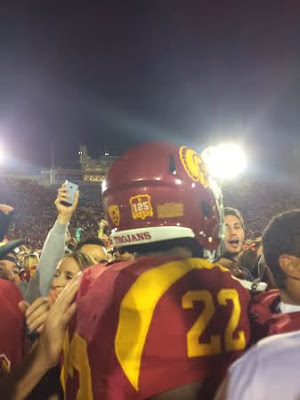 The game was the perfect way to (almost) end my senior year football season. It was the type of game that only seems to happen in movies. Add our amazing seats and Scott being there,and it was honestly the best game of my entire life.

I know I still have to post my San Francisco blog post and one about hiking in Redlands, but this needed to be remembered too ;)
Posted by Watermelonsmiles at 2:21 PM