Even though I have been living in San Francisco for almost a year now (!), my younger brothers had never been up to the Bay area. After hearing me talk about SF during Thanksgiving, Christmas, and a weekend trip to LA in January, a sibling visit was overdo. My parents and brothers (Jessica would be flying up the next week) finally had planned a trip to see me over the President's/Valentines weekend. On that note, let's ignore how I'm writing this months later.. In true tech culture, I set them up with their first Airbnb and immediately started planning a weekend for the SF newbies. 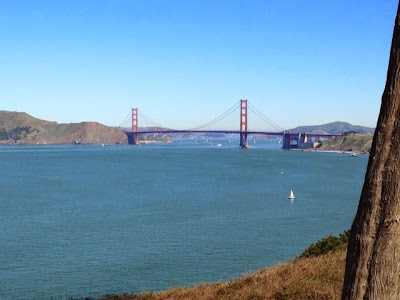 My brothers and parents live for hikes, and I could not have gotten luckier with the weather. I knew rain or shine we would be outside exploring, but I was thrilled that the rain came the weekend before--leaving President's day 75 degrees and sunny. While my parents drove up that Friday, I worked from home/the La Boulange on my street and was lucky to finish up my work right as they rolled in to Inner Sunset at 2pm. 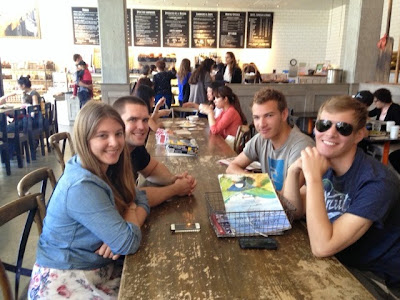 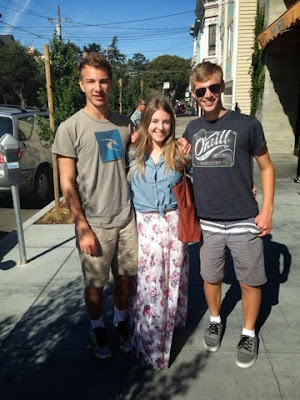 I joked that I was giving my parents the true San Francisco experience as they ordered lunch and coffees while I kept my laptop (complete with my tech company sticker) open at the coffee shop. I may have kept attacking my younger brothers with hugs and picture requests because I was so excited for them to be at my new home. After walking the few blocks back to my place, I gave them the tour of my apartment before heading out to explore the best part of my neighborhood --Golden Gate Park. We walked all around Stow Lake, hiked up to the top of Strawberry hill to get a view of the Golden Gate bridge, and kept walking for another hour or two until we got to the DeYoung Museum. I actually had not been before, but I was blown away by the top floor views of the city which was an awesome and free surprise. Our luck got even better when we realized that after 4:30 the art gallery is free for visitors. We browsed through the exhibits before walking back to my place. 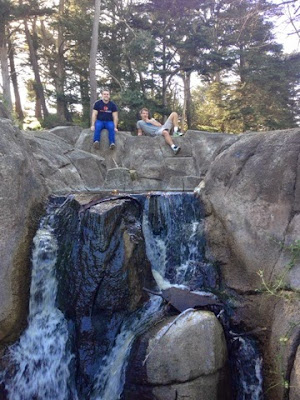 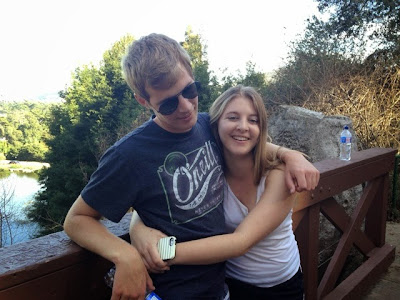 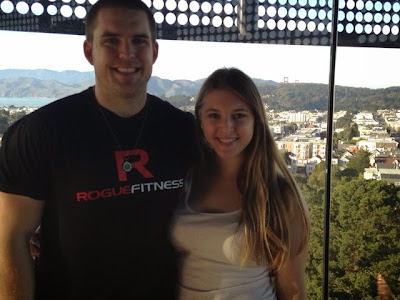 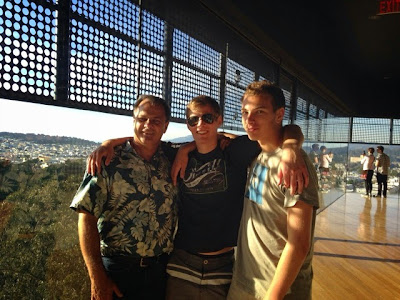 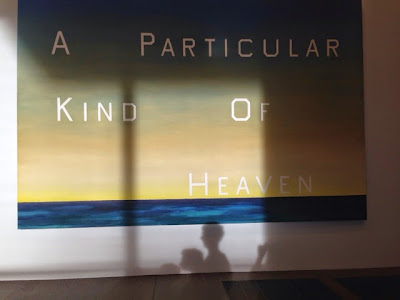 After a quick break, the family met us back at the apartment to head to dinner. While I would usually take visitors to a nicer restaurant like Park Chow on my street or my mom to a more trendy venue, I ultimately decided to go for the more laid back option of Cybelles with a cute interior and simple food. The second my brothers got their hands on cheesy garlic bread I knew I made the right choice. We left full and with plans for an early start Saturday morning at Sutro Baths.

The last time I hiked Sutro Baths I immediately knew I had to take my my parents and brothers when they came to visit. Our hike took us from climbing on the ruins to walking the labyrinth at Land's End; down to the beach hopping on a makeshift driftwood seesaw to finally taking in the view and photo opportunities at Eagles Nest. 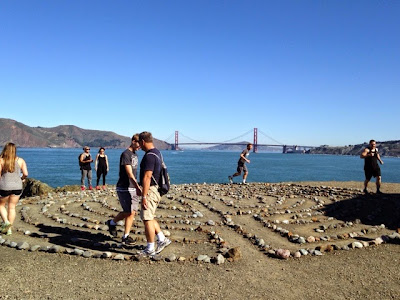 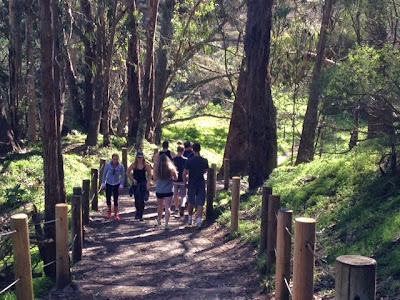 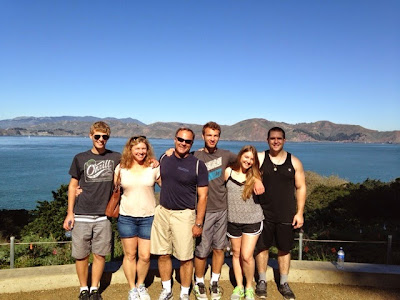 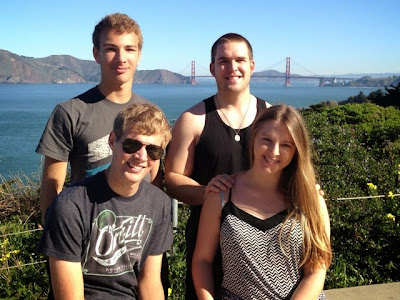 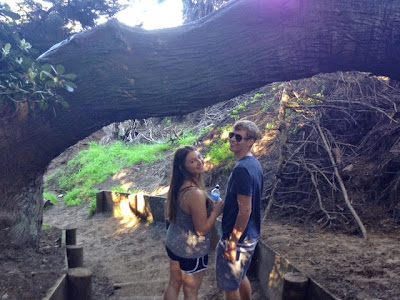 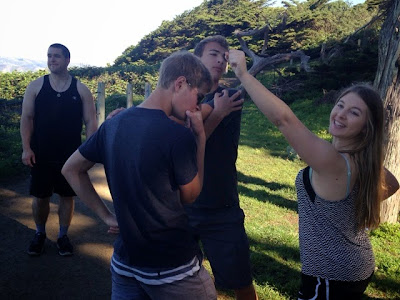 After realizing we had spent a few hours walking around and hiking it was (not so calmly/hangerily) decided it was time to head back to the car and grab lunch. 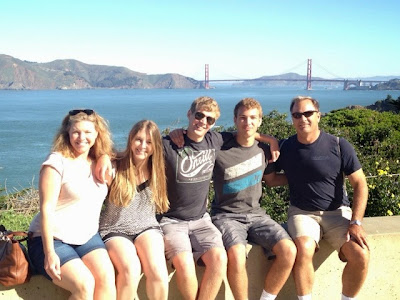 Since it was still Johnny and James' first visit to San Francisco, it was officially time to hit some of the touristy spots. First stop: off to Fisherman's Wharf to grab bread bowls from Boudin. I originally was not overly excited about the idea (I had a trendy brunch place more in mind), but I re-realized how exciting it is to be at Boudin for the first time. My brothers (true lovers of bread) watched the loafs made in the window, and Johnny bought a little turtle shaped loaf of sourdough for his girlfriend. We ate bread bowls and clam chowder in the sun until we were energized enough to start our hike up to Lombard Street.

While it may be the curviest street in San Francisco, it was funny to see my brothers so confused on exactly why it was so immensely popular. After long hike up with the dozens of other tourists, I can definitely say I that I have no answer either. Our next stop was a little more exciting to the crew, as we were just quick cable car ride away from Gharadelli ice cream sundaes. 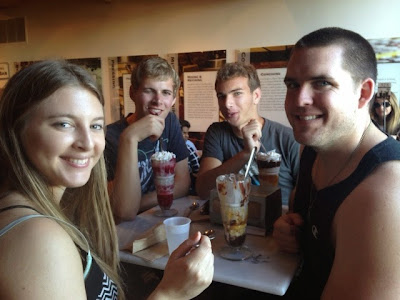 Everyone left feeling full and tired after hours and hours of walking throughout the day (which my mom and her beloved fitbit can attest too). While we had big plans to meet up for dinner, once we got to our separate apartments it was game over. Scott and I ordered in Chinese food while my brothers and parents relaxed at their Airbnb and did homework.

I thought I had created the perfect plan for Valentines for Scott and I: late night reservations at Zazie for dessert. A cute, well known cafe near my apartment with late enough reservations to take into account my parent's visit. However, after getting all dressed up we arrived at the restaurant and quickly realized it was a very expensive prix fixe menu. Although a little disappointing, we walked back to my neighborhood, grabbed a pastry from an open bakery and headed to a bar for some drinks. A testament to my adorable ability to not double check details (one of my many endearing qualities), it was still a great and more natural end to Valentine's with the best boyfriend ever. 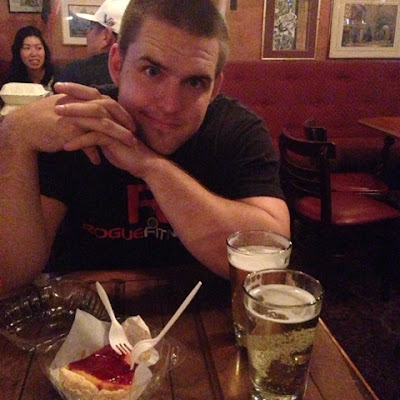 The next morning we were up bright and early to grab brunch. My parents had grand plans of spending the remaining part of the holiday weekend driving down the California coast, so they had to leave San Francisco early that morning. My Dad and Mom had one request for breakfast: Art's Cafe. They had both been on their last visit, and were excited to show off the small, one counter wide diner to my brothers. My brothers are not easy to impress, but they left promising me they had a great time and loved San Francisco.

My sightseeing, exploring, decision making, and entertaining duties left with my parents, brothers, and Scott that Sunday, and the pace of my holiday weekend turned from a whirlwind of adventure, laughter, bonding, and hangriness to a slow lull. The lively (and early) Sunday brunch morphed into long naps, an early dinner with friends, and Netflix in bed. Lucky for me, I still had one more activity planned to enjoy the Monday off. I met my friend Hannah the next day, for a picnic at Alamo park. While I strolled up to the grass, she had grabbed a prime spot in front of the painted ladies with a bag full of baguettes and bruschetta, salad, lemonade, and other goodies. We basked in the sun and lurked French bulldogs until we decided to stop at Birite grocery for San Francisco's famous BiRite ice cream. Tip: the Nopa location lines are only 5-10 minutes compared to an hour in the mission. 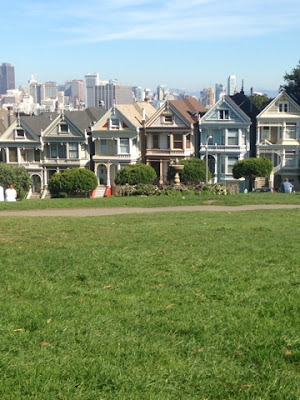 Just as the sun started to go down, the fog rolled in. Although I will always love sunny, hot days, there is a special charm to the SF fog coming right at the end of the weekend. It gives you time to bundle up, reflect on the amazing weekend, and feel a little less bad about spending the work week inside. Although, this weekend was months ago, my parents and brothers visiting was too great of a memory not to document and relive through blogging.
Posted by Watermelonsmiles at 11:15 PM