I grew up going to my family's cabin in June Lake my whole life. It's been the source of amazing memories--summer days filled by jumping in the lake, rock climbing with siblings, and tons of time with family and friends; not to mention, winters of skiing June Mountain and building snow forts in the cabin driveway. Scott has been up to the cabin in the past few years on a family vacation and he fell in love with it as much as I have (a positive sign, if you ask me).  This blog has seen a few posts on adventures I've had in the Mammoth area, and it just feels right that one of my favorite places that been a part of my life since childhood, is now the story of my engagement and soon future major milestones. 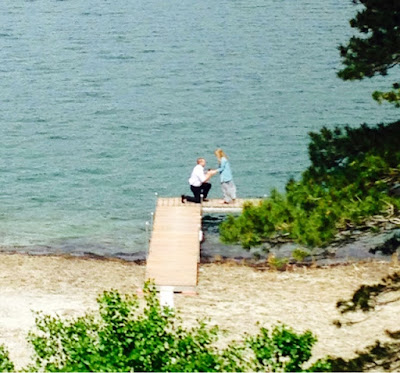 The plan: My childhood friend Turner and I left our beloved southern California and ended up in Portland and San Francisco. We decided to plan a girl's weekend together at my grandparent's cabin in June Lake, CA. Since her parents and my aunt recently moved to Reno, we decided it was the perfect place to join forces and drive out to the cabin for a weekend.

What actually happened: Scott and Turner had been orchestrating a secret proposal, and I somehow had no idea.
One reason the proposal was such a surprise was because it was such a crazy weekend leading up to it. I spent the week on my first independent business trip in Chicago (aka not a conference) and first time in Illinois. Between the time change, work events, and meeting with a friend for dinner, it was fun but hectic. After Chicago, it was a bumpy flight back to Reno where I saw my aunt's new house and hung out for two days with them. The funniest part is that she knew what was coming and subtly planned a day of activities including getting a manicure and shooting some rifles (aunt and uncle came from Texas, y'all).  Finally, my friend flew into Reno and we were off on the drive to June Lake. We got in late, headed to bed to be rested for what was going to be an eventful day. 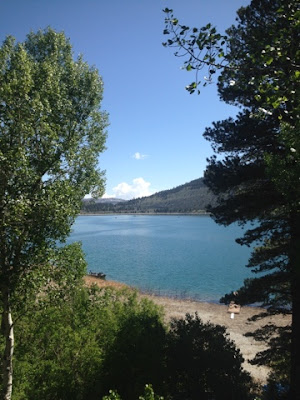 The next morning was spent at a cute little mountain town coffee shop complete with a sugared up coffee drinks, fresh made pastries, and the owner's old golden retriever laying by the wood burning stove. Once we were fed and caffeinated, Turner and I went on a short walk down the small one street town center and the small winding roads filled with old timey motels, cabins, and lake views. 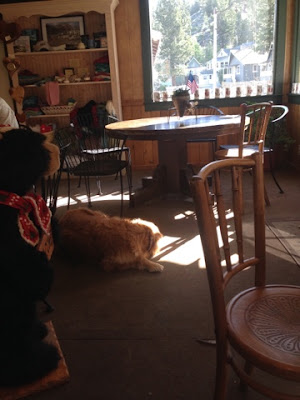 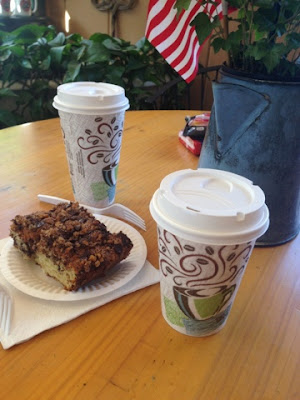 One of the most impressive parts of the proposal weekend was that while I was enjoying my mountain retreat and talking to Turner for hours (including conversations about possible engagement), she didn't give a single clue away. I'm not sure exactly how she managed to keep it a surprise or a straight face, but she convinced me to throw on a maxi dress and some makeup before we were off to June Lake's new brewery. There she tried to stop me from ordering the pulled pork quesadilla, but I continued my blissful ignorance and ate the entire thing. A few beer flights later, and Turner suggested we walk back to the cabin. 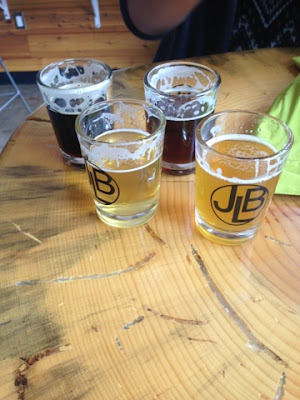 As we were about to turn up the driveway to the cabin, I saw Scott standing in a suit at the path to the dock and I immediately knew what was happening. Turner ran up to the cabin, and Scott led me down to the edge of the dock talking about us, our future, and even the role that June Lake will play in our lives. He was being sweet and romantic, and unfortunately I was in so much shock that I wasn't quite reacting to anything (outwardly). Finally, he got one one knee and showed me the most beautiful ring that he had created and I managed to get out my yes. A few people on their fishing boats cheered, we kissed, and Scott turned me around back towards the cabin. On the deck popped out some of our closest friends cheering -- and I was even more shocked then I knew possible. Turner, my sister, my high school bestie and current SF roommate, Scott's best friend, my college best friend, and another high school friend had all driven multiple hours to watch and celebrate. 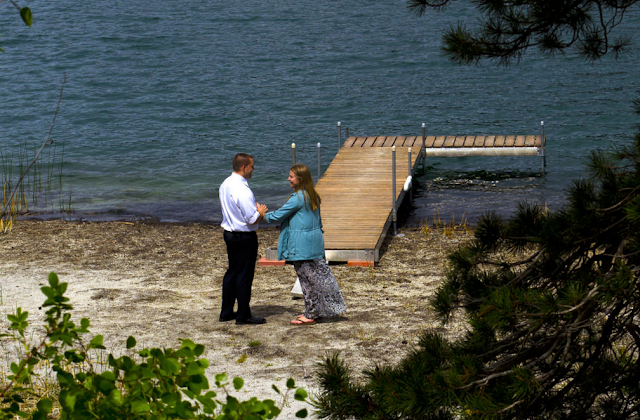 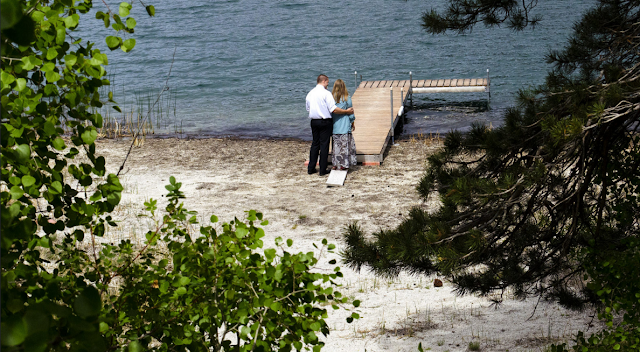 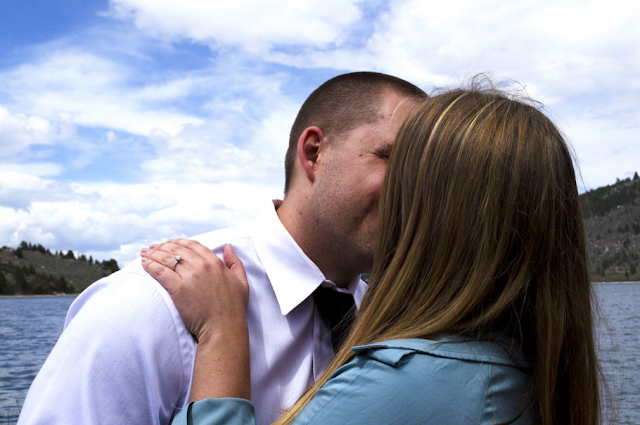 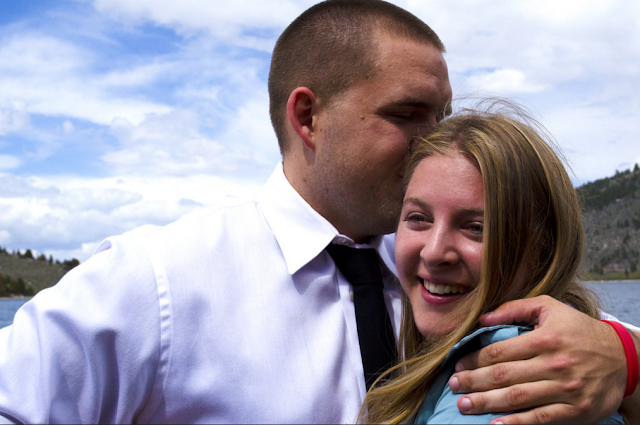 The rest of the night was spent with bottles of champagne, pizza from the local shop, jumping in the lake in our underwear (and amazing friends who somehow forgave us for being a casualty of that), Harry Potter movies as we lost a few to sleep, and a lot of staring at my new ring finger. 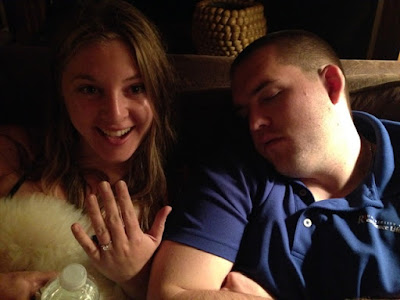 The next morning was spent at the same coffee shop and a similar walk this time as a newly engaged women surrounded by my fiance and friends. A quick clean up later, and it was time to say our goodbyes as we all parted ways. I wish I could better put into words how much this weekend meant to me. For Scott to know one of my favorite places and make it a lifelong memory for us, for him to orchestrate a real genuine surprise (and my friend to pull it off), and to know that I would love to celebrate with friends after. It was proof that he really does know me, and I wouldn't change a thing -- except maybe have a stronger reaction. Ends up when I am truly, mind blowingly shocked my face kinda becomes expressionless haha. 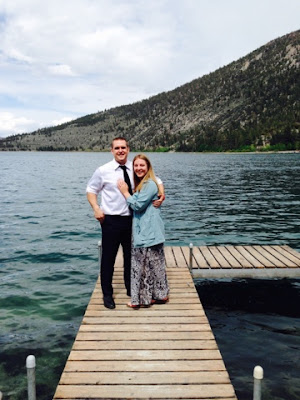 Just as touching was the fact that our friends had traveled hours to a remote cabin in the mountains to be there for that special moment and celebrate. I have a "behind the stage" video and it just means so much to me to hear the support, love and excitement are friends had and the fact that they were willing to dedicate their weekend (and the majority of it to travel) to be there for us. I already feel so lucky and loved.

This is obviously a few months late and wedding planning is already underway, but I'm excited to get it on the blog for memories and years to come.

Posted by Watermelonsmiles at 12:51 AM