After sleeping in to noon and spending the next 5 hours at Ikea (but I finally got a good pillow and my bed has become a beautiful thing again) on Saturday, I was determined to get out and see at least one famous Prague landmark today. I planned to meet up with a friend this afternoon, and we decided that I would meet her at her friend's apartment in Prague 1. Since I am in Prague 3 and a little bit farther away, I was going to take public transportation and meet them there.

I looked up the directions (it suggested to take tram 16 all the way there then walk), but once I got to the train station I of course thought it would be a better idea to take the metro. The stop I was looking for actually doesn't exist on the metro, and it ends up I had read the tram schedule wrong. I spent the next hour walking in and around Prague trying to figure out how to meet up with everyone. Part of it was in a way kind of enjoyable because there was some light snowing that made me really excited and I was able to walk briskly through Wescesles Square, but I felt bad that I was running so late. I wasn't really able to get any help from the Czech people I asked, but finally got enough direction to piece together a plan. A few phone calls later and a lot of luck, I finally met up with my friends.

After a lot of walking and stairs, we finally made our way to Prague Castle and St. Vitus Cathedral. The cathedral actually looked more like a castle then the castle itself, and the whole area was on top of a hill that overlooked most of the city. Since we just walked around, the pictures do a better job of showing what we saw/did. 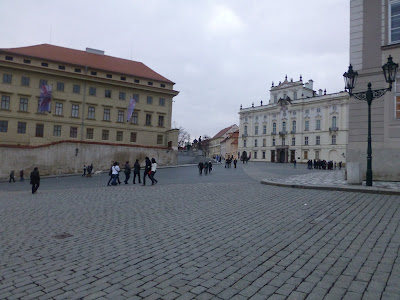 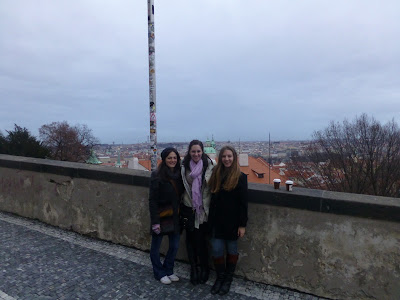 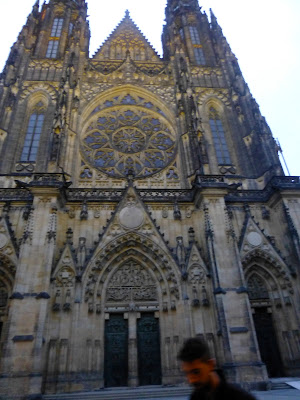 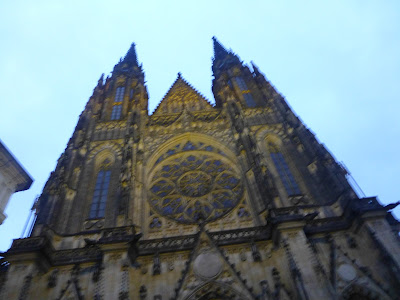 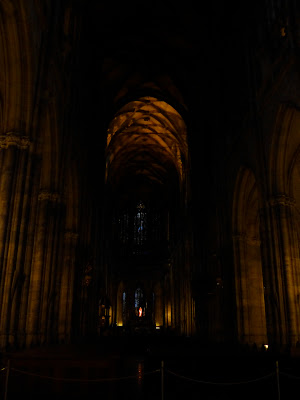 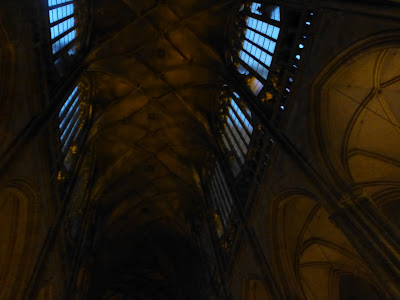 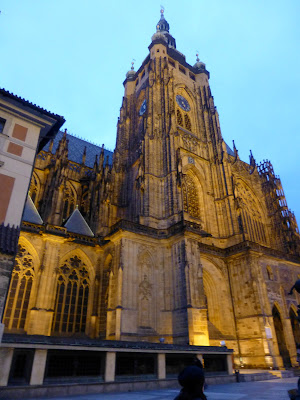 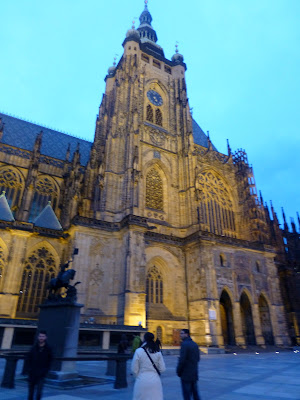 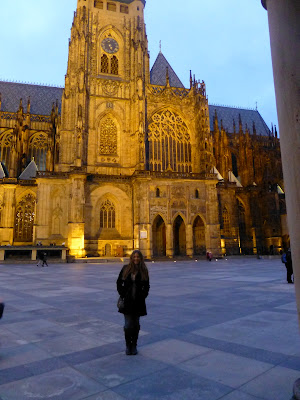 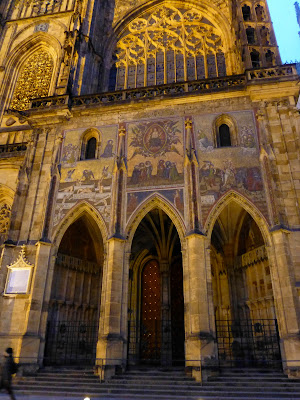 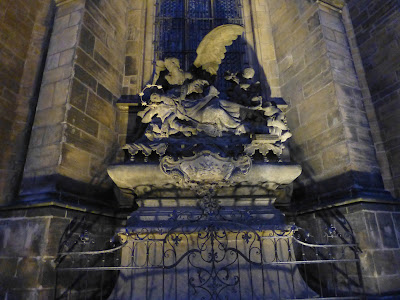 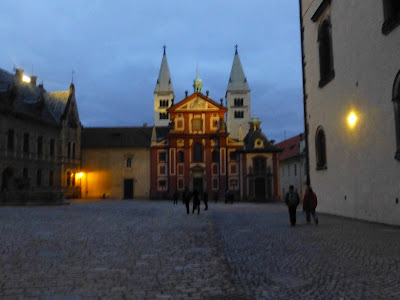 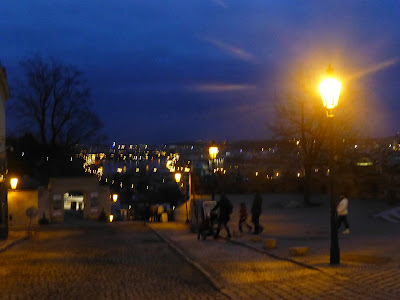 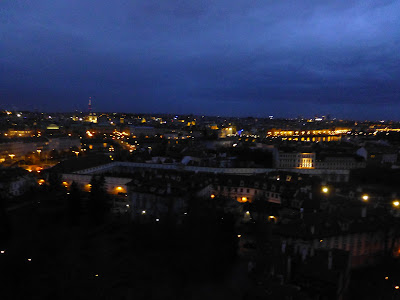 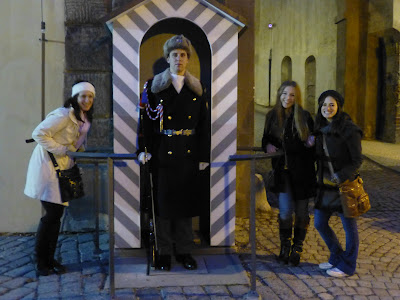 By the time we were done looking around, our group decided we were on a mission to find food or at the very least something to drink. After running into places that were to small to fit us or had beer that was to expensive (the guys that we were with were being very picky), we finally found U Sedmi Savbu. It was a medieval decorated restaurant, and we headed down to the cellar to get a room to ourself.
﻿﻿ 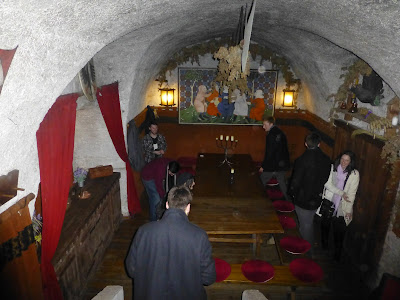 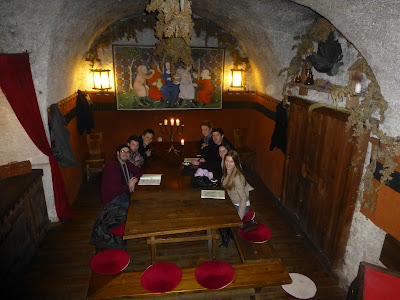 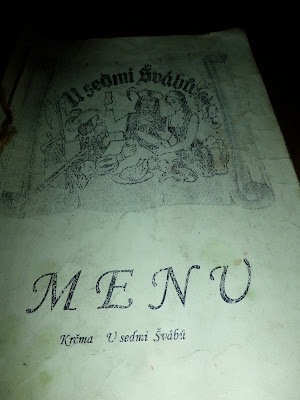 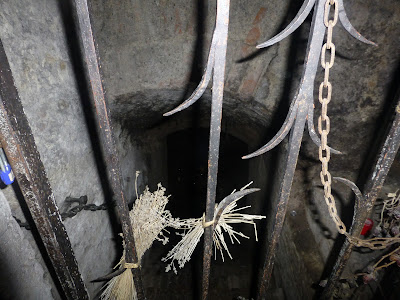 I ordered something chicken because I thought it would be lighter than what I really wanted--goulash and dumplings--but it ended up being and fried and not that good. Lesson learned: when in a new restaurant in Prague, order what you really want. This food was definitely not cheap compared to other places around the city, but it was such a cool place and fun room to be as loud (read: American) as we wanted. Sight seeing combined with exploring for a place to eat and consequently 2 hour meal in the "Dungeon" made Sunday my favorite day of the trip so far.

Fun story on the way back: Since I live farther away, I got off the tram early to take the metro home by myself (don't worry, I've already informed my mom it was safe). I was only one of two people there, so I hung by myself with my Czech face on (serious face). While waiting I was approached by a group of American girls and asked if I knew where the astronomical clock was. After I answered that I didn't, I saw them all looked shocked and realized that they thought I was going to be Czech. Ends up they were also studying abroad with another program and just got here the night before. I guess one week in and Prague is staring to rub off on me!
Posted by Watermelonsmiles at 10:49 AM