Surprise Trip to the Grand Canyon

After coming back from Prague (and promptly spending a week lounging in bed), I started to get a little antsy. It's hard to give up my new found habit of traveling and exploring every weekend, and I missed seeing and discovering new places. I've been meaning to write a blog post that talks about my overall experience abroad, but one of my biggest realizations is that I want to explore my home more. I've only been outside of California a few times--a weekend to Texas for wedding in middle school and Hawaii two summers ago. In my free time I've been writing blog posts about where I've been, looking up travel blogs, and talking about my past semester to anyone who will listen.

But even before, I wanted to go to the Grand Canyon. It was on my bucket list, and I always told Scott how we should spontaneously drive there just to see it. So when Scott picked me up on Friday and said we were going to the Grand Canyon and leaving now, it was the sweetest and most perfect anniversary present I could have asked for. 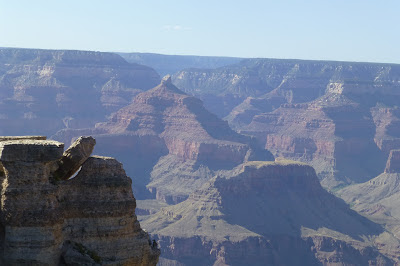 After opening the surprise envelope that said where we were going, I quickly grabbed all the things I was told to pack yesterday, and we started our drive to Barstow. Since we were leaving around 6:30 and the drive was around 8 hours, we were staying in Barstow for a night and leaving early the next morning. We had a quick dinner at Panda Express (it was free orange chicken night, how could we not?) right before they closed. It was located in the strangest rest stop area so we people watched all the cowboys to EDC ravers passing through before heading to bed. 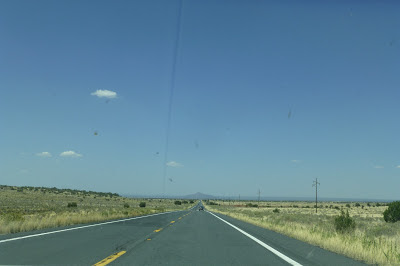 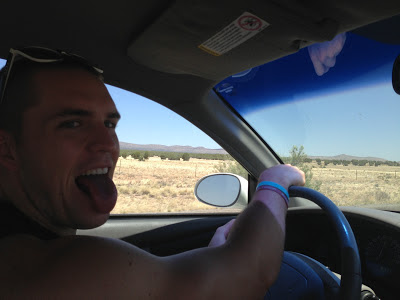 We grabbed a quick hotel breakfast and gas and our road trip was officially back on by 8 am. I did a little happy dance when we drove into Arizona and made Scott take a picture of the Welcome Sign. Our plan was to drive through Route 66 and get the full road trip/bucket list experience and then make it to the Grand Canyon. Our first stop was at Kingsman, AZ where Scott introduced me to Sonic slushies (blackberry flavored and delicious, if you were wondering) and we officially got on Route 66. 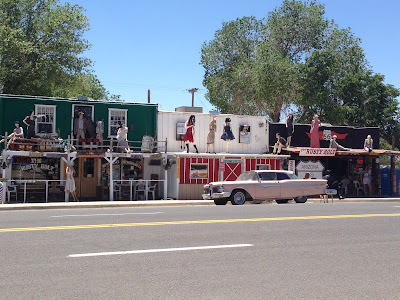 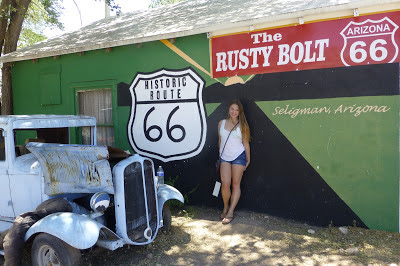 The first hour was completely empty, and we became concerned that there actually wouldn't be anything to see or eat since our number one goal was to have lunch at a Route 66 diner. After passing lots of cows, horses, and one haunted school house (not joking, we looked it up), we decided we'd drive until Seligman, AZ for a hamburger place we read about online. Once we got there the restaurant was closed for their daughter's wedding, but we went to a nearby restaurant called Roadside Café. It was a very kitschy place, and I got a burger and Scott got a Reuben sandwich. Part of the drive up we were talking about lemon cake, and we were so shocked to see it for sale at the restaurant that we had to order a slice for dessert. After grabbing a few pictures of all the crazy decorations, we were on a non stop path for the Grand Canyon. 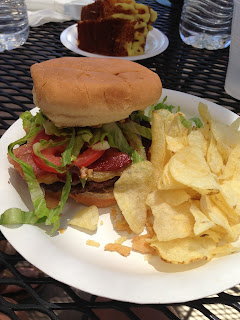 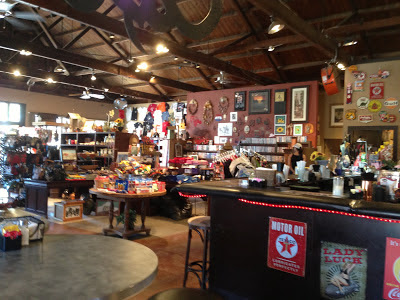 The Grand Canyon definitely met my expectations and was beautiful. We spent about a few hours walking around the top, taking a billion pictures, attempting to picnic before getting attacked by an extremely aggressive squirrel, climbing on rocks, petting donkeys, and repeating that this was the present ever, over and over (that part was just me). I'm pretty sure the amount of pictures I took captures how much I loved it (since I know whatever I write won't), and I already can't wait to go back and hike it. 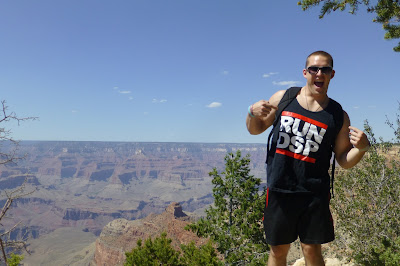 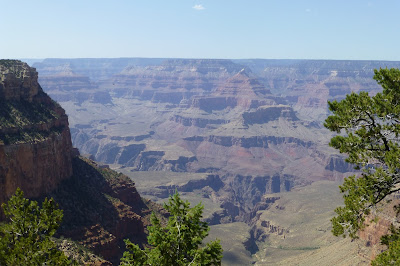 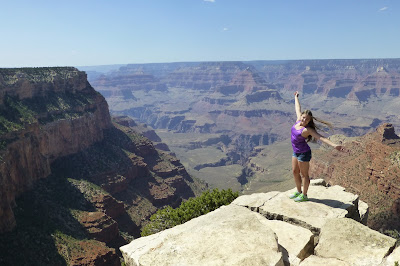 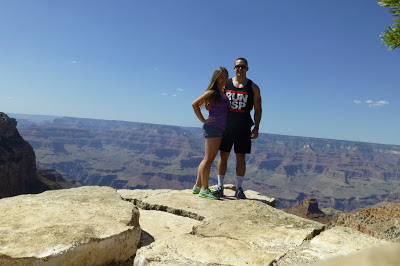 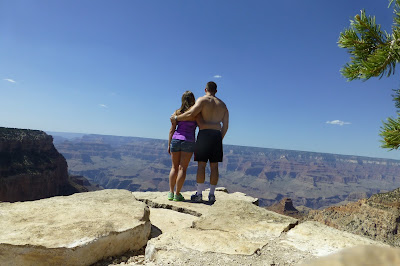 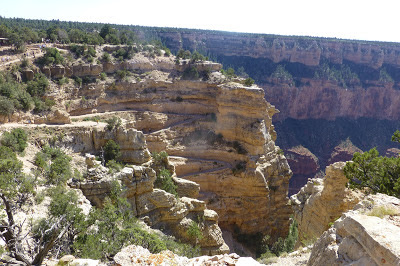 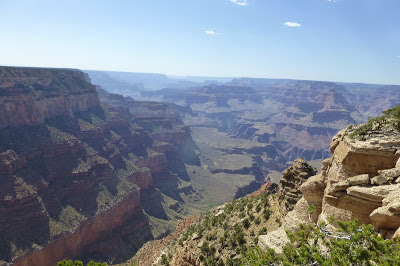 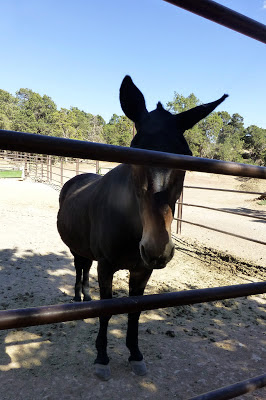 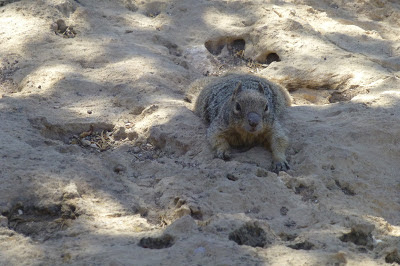 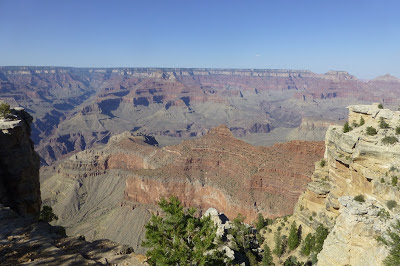 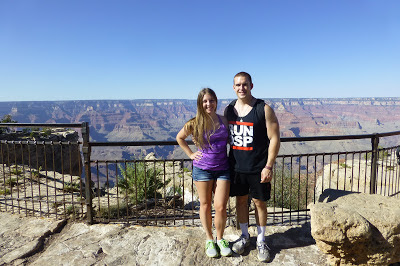 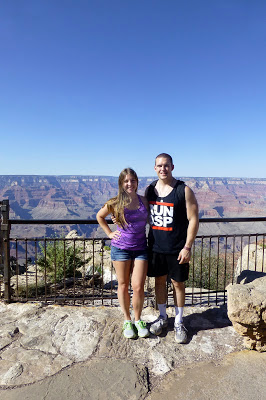 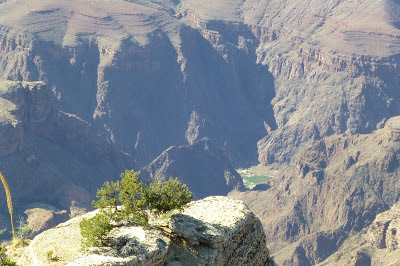 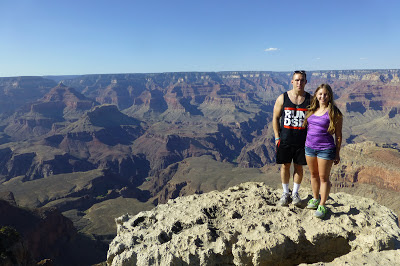 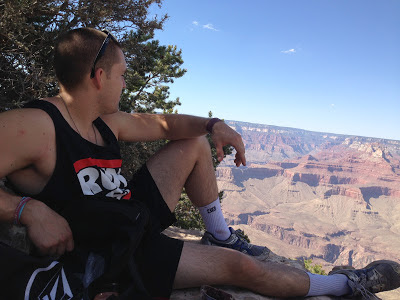 After a last stop at the Grand Canyon where I spent 10 minutes debating whether I should continue the postcard tradition in the US (I decided yes) and whether I should could a cute illustrated postcard or a photo (I got both), I left with my souvenirs and a new appreciation of Scott for putting up with me ;). Our hotel was in Flagstaff, AZ about a hour or less away from the national park. While the drive to the Grand Canyon was exactly what I pictured Arizona to be like (desert and hot), I was surprised that Flagstaff felt more like Mammoth or June Lake. We checked into our hotel, and went to go find some food.
﻿ 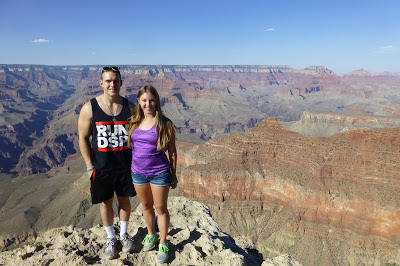 After hunting for a place to get BBQ, we ended up at Satchmo's. It was a really small restaurant, and the cashier was really friendly and helpful about things to do (although I didn't have the heart to tell him I wasn't 21 yet). I ordered a pulled pork sandwich and sweet potato fries, and left very happy. The rest of the night was spent with Scott introducing me to the show Archer which I quickly became obsessed with, and packing up our stuff.
﻿
The next morning we planned to go to a Brandy's Restaurant and Bakery for breakfast before heading out for the long drive home. Even at 8am the place was packed, and the restaurant had actually been featured on the food network show Diners, Drive Ins, and Dives. I knew I wanted to at least try the pancakes because everyone in the restaurant seemed to be getting them and they looked delicious. The omelets came with a side of pancakes, so I ordered a mushroom, cheddar, and sausage omelet (it also had hollandaise sauce on the side). It was an amazing breakfast, and some of the best pancakes I've ever eaten in a restaurant. 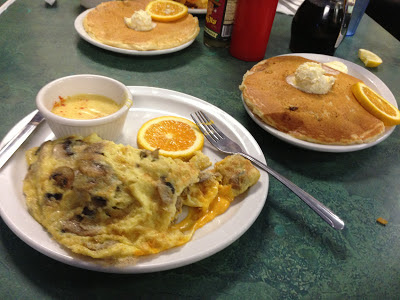 Scott and I grabbed some ridiculously cheap gas at a run down gas station, and started our long trip back. To get in the spirit we found a country station to listen to, but ended up getting pretty into it (which is hilarious if you've ever met Scott). We passed the time talking, listening to music, counting road kill, and filling out some of the Europe photo album I made for Scott. I think one of the best parts about this trip was that even after being in the car for 8 hours, we not only felt no need to kill each other, but also never ran out of things to talk about. I think we both felt a renewed sense of awesomeness and confidence in our road trip skills (our relationship is already pretty rock solid--get it Grand Canyon pun?). 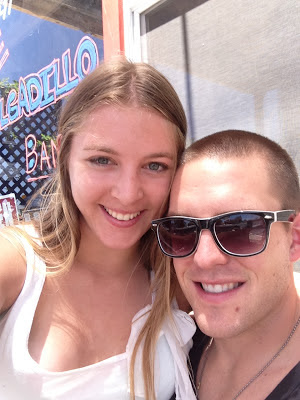 One of our last stops was at Mr. D's diner at Kingsman on Route 66. It was 50's themed, so we grabbed some burgers/patty melts and a shake. Everything was good, but the fries were delicious. It was also interesting because our waitress moved to the small town from New York because of Hurricane Sandy. Ends up she loved it there, but it seemed like such a random move. 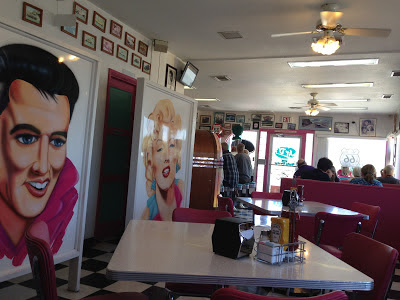 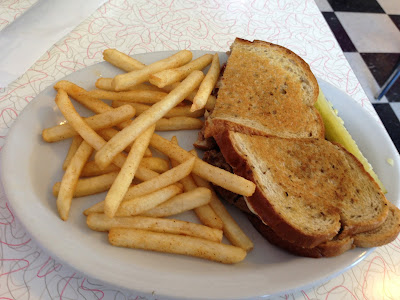 Our last stop of the road trip (besides one more gas fill up) was to dip our feet into the Colorado River at the California border. We got out in the hundred degree weather, got our feet wet, and switched drivers. We made liberal use of the cruise control, ate some candy, and fought bumper to bumper traffic in the middle of the dessert, and made it home around 8pm.

So happy 7 year anniversary to the best boyfriend in the entire world. Thank you for planning a weekend that was incredible, and the best surprise and present I could have ever wanted. You are my best friend, and I love how it's weekends like these that really show how perfect we are together. We can laugh and joke around for 8 hours with countless inside jokes or take cute kissing pictures on the Grand Canyon or fight off seriously scary squirrels with water bottles. Not every person would be able to plan such a sentimental and fun trip and manage to still keep it a surprise, and I appreciate every little thing you do for me or eat our heart out on delicious food.  I love you so much, and I can't wait for our many, many adventures in the future. 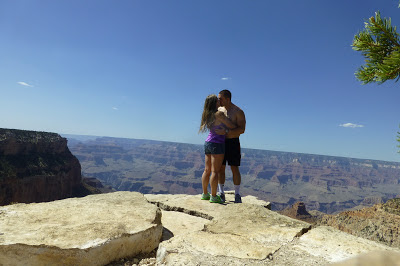 Posted by Watermelonsmiles at 1:53 PM