After 3 months of training and long runs everywhere from San Francisco to Santa Monica, the weekend of the Surf City Half Marathon was finally here. Running a half marathon is also on my new bucket list, so I was both nervous and excited to finally do it. 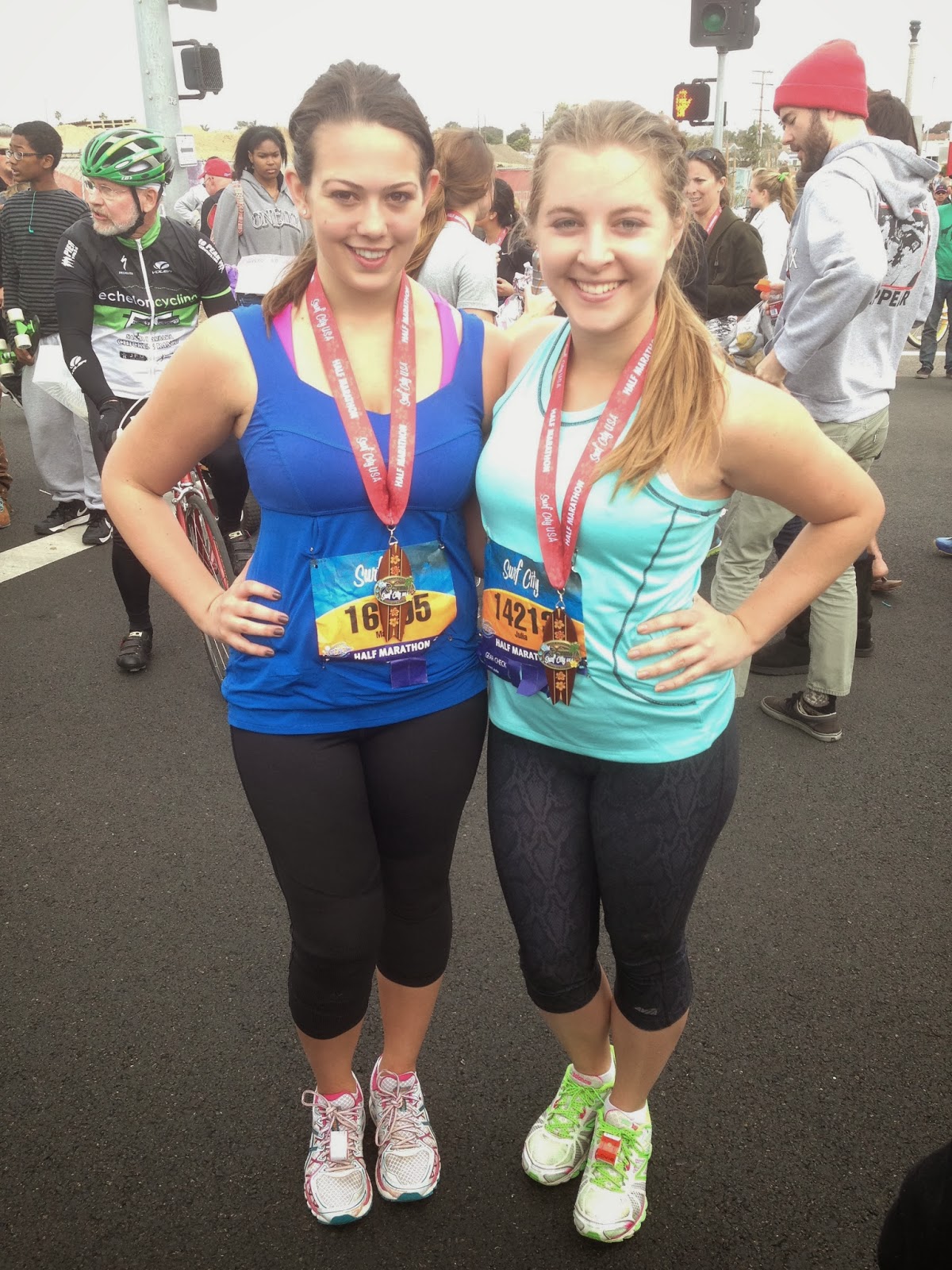 On Saturday, I drove to Long Beach to pick up my sister, and we both headed to the race expo to get my and my roommate's bids and swag bag. It was much funner than I thought it would be and Jessica and I spent most of the time grabbing all the free samples and admiring my new hot pink, long sleeve (!) race shirt. 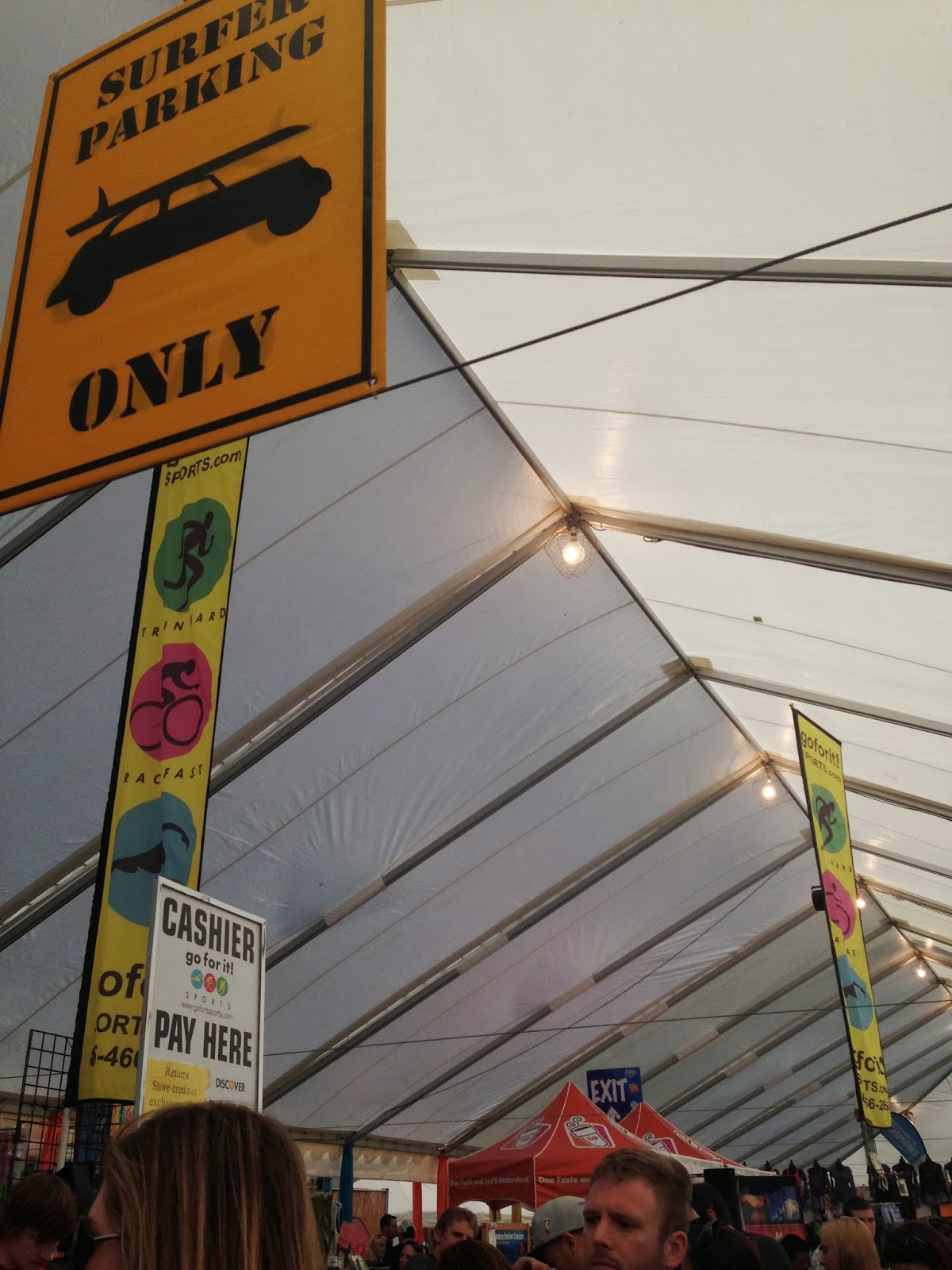 We spent the rest of the day hanging out until we decided to grab a dinner downtown at Pitfire Pizza. Madison and I shared a pizza and spaghetti and meatballs (tip from my brother for our pre-race meal) before heading back, packing our running stuff, hyperventilating, and setting our alarms for 5:45 before finally heading to bed. 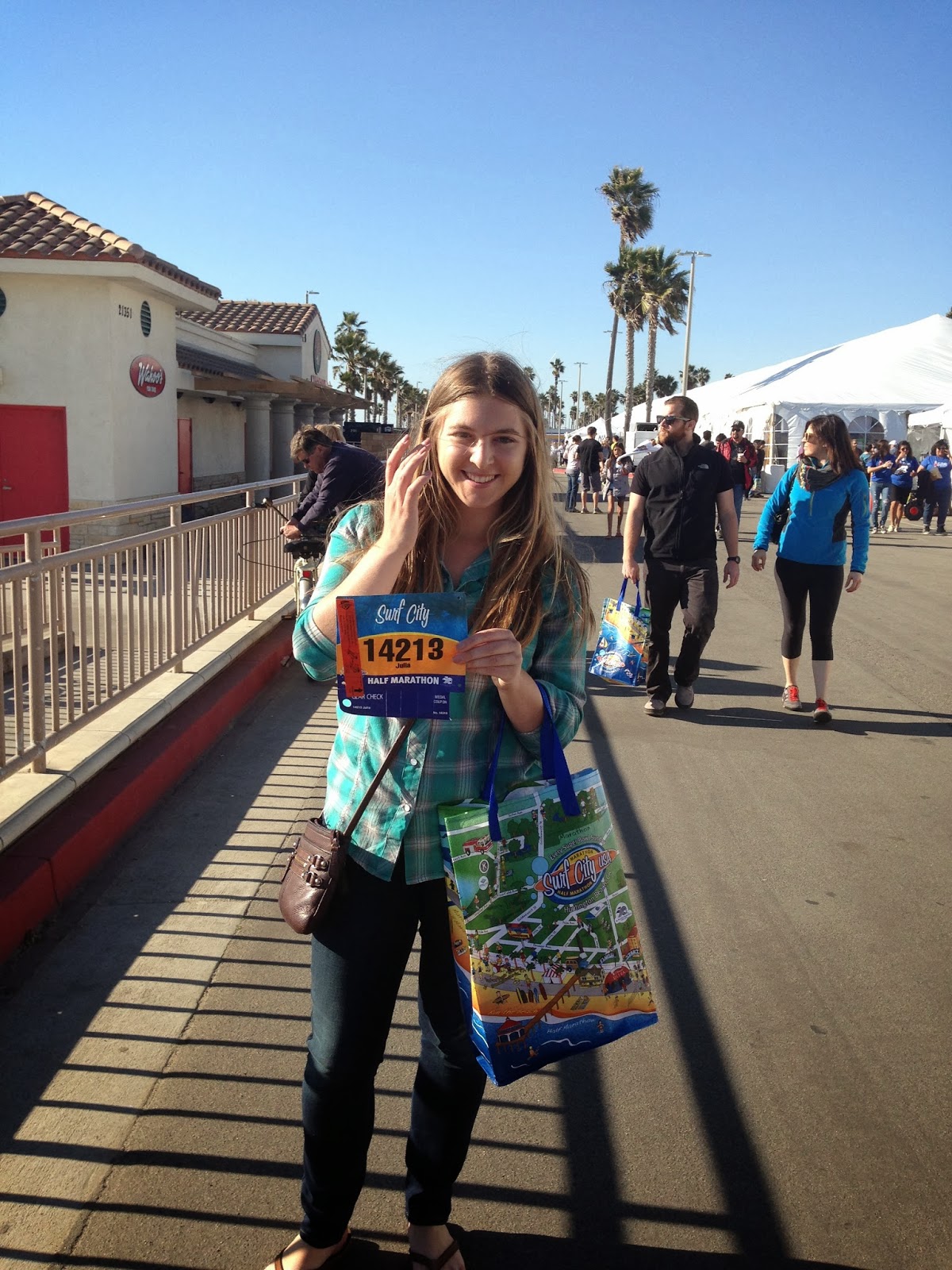 5:45 is a time meant for sleeping. Hearing my alarm and realizing that I was getting up to run 13.1 miles (which I had to keep reminding myself was something that I had not only chosen to do but also paid a decent amount of money for) made me wish for a few more hours of sleep. Especially since I found out when I'm nervous, I wake up and switch my pillows every hour of the night. I was happy that I already laid out all my clothes the night before, so it just took a quick change and grabbing my bag before I was downstairs eating my PB&honey English muffin.

The sun was rising as we drove the 45 minutes to Huntington Beach, and for once there was no LA traffic and the radio wasn't playing ads. We were trying to mentally prepare ourselves for the race, and the drive did actually help.

What didn't help was waiting almost an hour for the shuttle to take us to the starting line. It was really cold and we went from being intimidated to just wanting to get on the bus so we wouldn't be cold and late. By the time we made it to the start our heat was just about to begin. Without anytime to get nervous, we were instantly running.

The start was scenic and felt good. I instantly warmed up even though I had tossed my jacket to the side, and running the two miles to a three loop mentally made the first half go quick and painlessly. I ran the first half of the course with Madison which meant that I had someone to talk to. 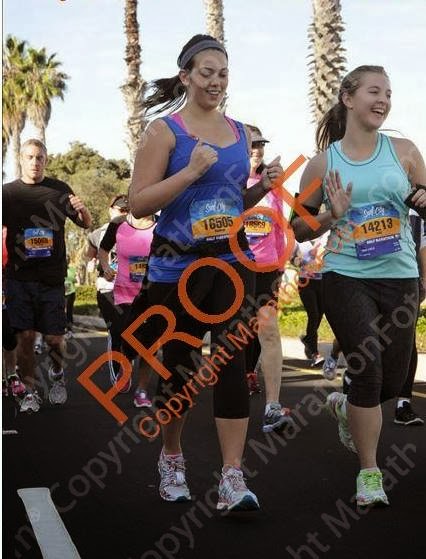 For some reason, I had decided to train for the entire half marathon without listening to any music. It actually made the run feel much more special, and it became a more meditative experience. During a good run, I can just zone out and think about nothing for several miles or focus on mantras that motivate me.

Until mile 8, we were running to Bolsa Chica Beach on PCH. I was shocked about how good I felt--I didn't want to walk, was at a comfortable pace, and was enjoying having so many people around me to "target" since I usually run alone.

At that point, I grabbed a free Cliff Bloc (first time eating during a run) which helped get a little energy back. I was also tempted to grab a donut that people were handing out, but refrained when I imagined the stomach cramps that could result. As the race took us back to Huntington Beach, I started to get more and more tired. From mile 9-10 I was cursing the slight uphills (while also happy that my house was surrounded by so many hills during my training runs) and debating at what point to turn on my music. Mile 11 was a rough point--I finally turned on some Beyonce before realizing that without headphones, I couldn't hear anything. Luckily, at the point there were more spectators and I had made up several mantras that I was chanting in my head to make sure I didn't stop running.

Although slightly nauseous, I knew my one goal was to run the whole marathon. I had to keep reminding myself that I would be so disappointed if 2.1 miles from the finish line I started walking. It also made me think about how far I've come and how well the training worked. Achieving a goal was taking actual hard work, and I was amazed that this was possible for me. A red vine handed out by a spectator also may have helped too. 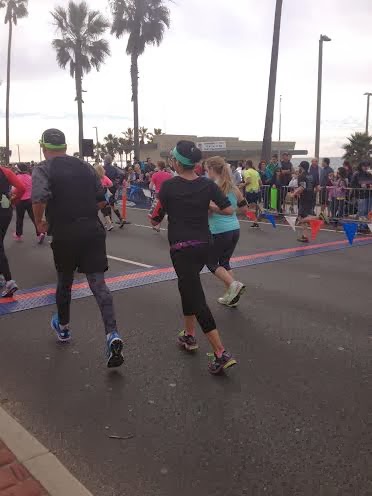 A huge motivator was also knowing that so many people came to support me. Scott drove out from Redlands, Jessica came to watch, and my two friends from school Andrea and Maddie had driven out as well. It wasn't until I was running the race that truly I realized how much it meant to me, and how much it helped keep me motivated. 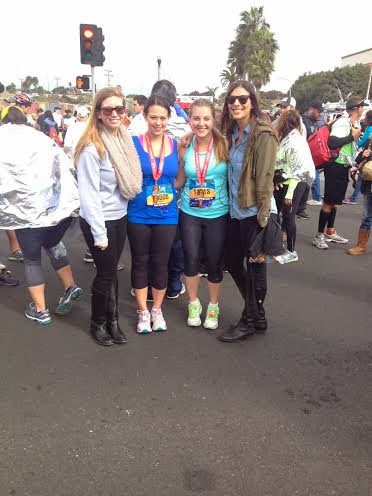 I saw them right at the finish line and waved before crossing over with the biggest smile on my face. That smile quickly turned to shock when I realized that instead of relief, every muscle from my butt down was KILLING me. I could barely walk, but I still managed to grab all the free food and my medal on the way out before meeting up with Scott (who may have offered to carry me ;).

I cannot put into words how proud of myself I am that I completed the half marathon and stuck to all my goals. Finishing the race was a combination of awe at how feasible the race felt (up until mile 9 I felt strong and in the zone) and how much mental strength it took to not take walking breaks. I was amazed I could run so far and so long without listening to music and really focusing on myself, my goals, and at the same time nothing at all.

A half marathon has been a goal of mine for years. I would print out half marathon training plans and look up races, but never got past a three mile run. Crossing the finishing line was so empowering, and I'm already looking forward to my next one (not in the near future however). I was also beyond appreciative to have such an amazing support system and people around me. 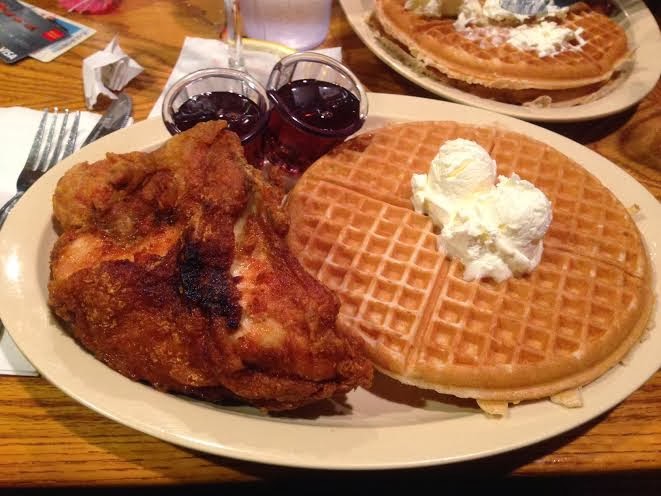 Even better, we celebrated with a mimosa and some chicken and waffles from Roscoe's in Long Beach. My eyes may have been a little bigger than my stomach, but it was amazing (and I had the leftovers for dinner). What's the point of a half marathon if you can't brunch?

Posted by Watermelonsmiles at 11:47 PM