A trip to Oregon has been in the making for years. One of my best friends from home and I spent all of our last semester in high school making pro and con lists for our top college choices. When I finally decided USC and she decided U of O, we promised that we would visit each other. Fast forward to senior year of college, and we both realized that the time to visit needed to happen soon. 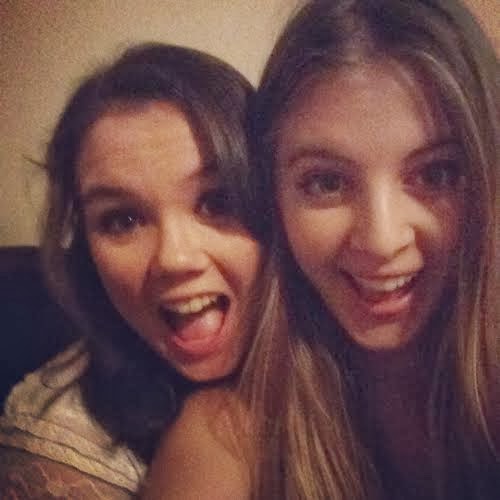 I booked my tickets to Eugene through Allegiant Air for only $98 round trip (!). Sure the airline only had one flight in on Thursday and one flight out on Sunday and charged for not only checked but carry on luggage, but I was ecstatic about the price. Since my friend Turner and I can share clothes and I don't have Friday class, I didn't end up paying any extra fees. (Unless you count the In'n'Out bribes I made to get a ride to LAX and back.) I stuffed everything I could into a backpack for my one free personal item, and promptly fell asleep for the whole plane ride. 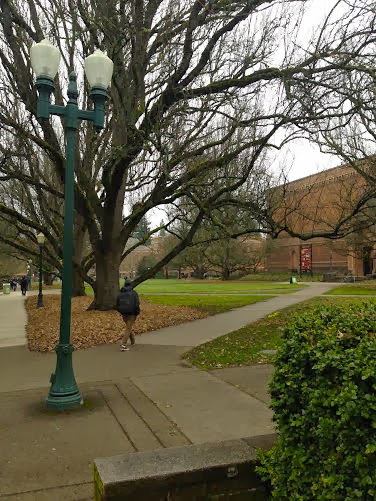 I got into Oregon in the afternoon, and updated Turner on my life while we drove around Eugene and through campus. While LA was about to have a huge rain storm, Eugene was beautiful with clear skies, suburbs, and pine trees all over campus. I definitely missed all the nature. Our first activity was heading to the U of O gym to take a Zumba class. After subtly finding a way to get me into the gym, we realized that we had forgotten the tickets to get in the class. Instead, we ran a few laps around the indoor track and finished with a 15 minutes on the stepper. It was fun seeing how nice their gym was (especially in comparison to our school) and I was getting a little envious. 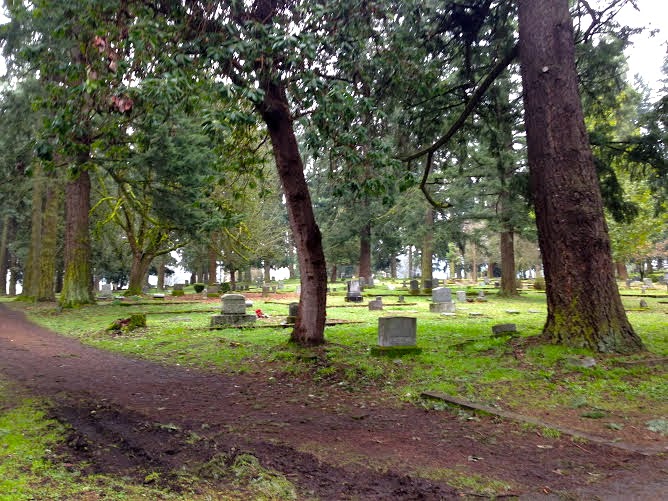 Once we got back to Turner's apartment, we made a frozen pizza and watched some mindless TV while getting ready to go out to the bars around the area. It was a ton of fun, and as always I reveled at how cheap drinks were everywhere outside of LA. The whole night was such a good time and may have ended with us eating two boxes of gluten free mac and cheese.

Friday was a much needed lazy day with the exception of walking around campus and Turner giving me a quick tour. Since we checked campus tour off of our weekend to do list, the rest of the night was spent guilt free watching America's Next Top Model marathons, cooking a crock pot dinner, making cookies (and eating cookie dough), and talking about nothing in the best way. 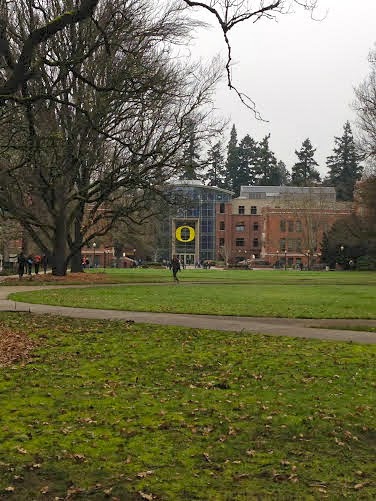 In the weeks leading up to the trip, I only had one request: to eat a VooDoo donut. I may have a slight obsession with donuts* so visiting one of the more famous donut shops in the US was a bucket list item. *Actually my whole family does--it was the one dessert everyone liked, so we all went crazy. Plus any surf trips came with a guaranteed promise of a donut stop. Saturday morning, we slept in and made our way to downtown Eugene. There was a decent line, so I had time to check out all the options and look around at the hilarious signs and donut names (so many dirty puns) and decorations. In typical fashion, I got too excited once there and ordered my top 3 choices--maple bacon bar, chocolate and rice crispy with drizzled peanut butter, and a VooDoo man. 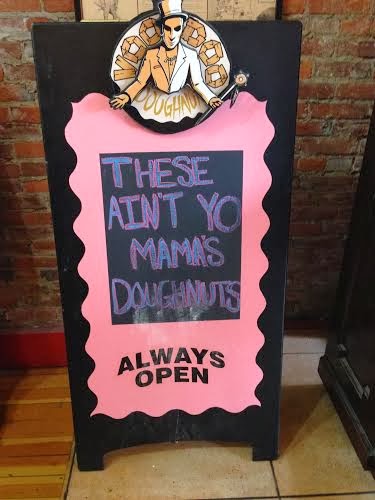 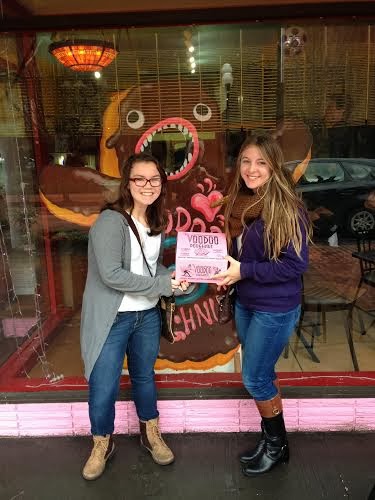 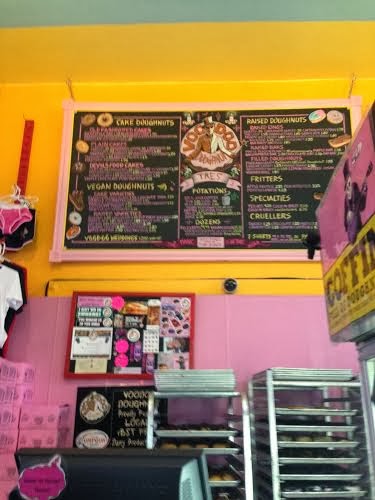 I ate the delicious maple bacon bar for breakfast (because the bacon makes it the most breakfasty, duh) as we drove to beat the rain and go shopping. I was enjoying the zero sales tax (craziness compared to CA's 9%). I obviously had not gotten into the Oregon spirit (or realization that I was going to eat three huge donuts by the end of the weekend) because while it was raining out I bought a new bikini top and Los Angeles tote bag. 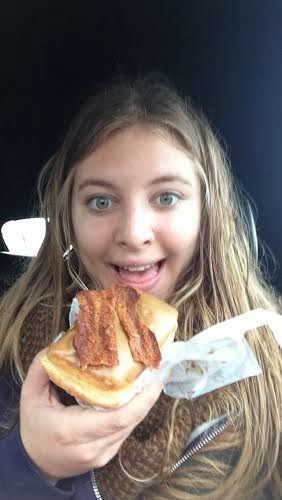 After shopping and dropping off the rest of the donuts off at the apartment, Turner, her friend and I all met up to take a Top 40 workout dance class that I had heard about all weekend. It was a different teacher than usual so the class turned out to be more comical than anything, but it felt good to be active and work off at least part of the donut.

And speaking of the donuts, I ate half the rice crispy donut between the workout class and dinner just because it was unbelievably delicious. 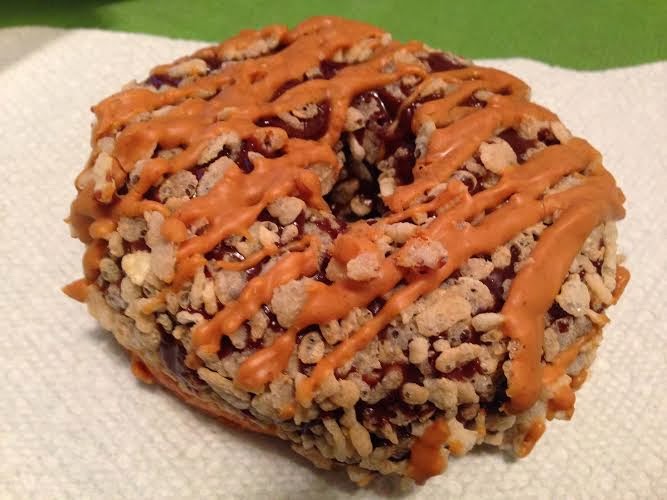 Turner's boyfriend and friend joined us for dinner and we went out to a local restaurant that for the life of me I can't remember the name of. After sharing an order of cajun tater tots with the table (which we were told was a necessity), I ordered a mushroom sandwich with cheese and sun dried tomatoes which I happily demolished.

To celebrate our last night together, we headed out again to the bars for one more night out. After dancing and bar hopping, we ended our night with late night Taco Bell (plus the last half of the rice crispy donut) and having heart to hearts. The whole weekend was so much fun, and it was nice to spend it with such a good friend and in a new place. Instead of it feeling like a trip, being in Eugene felt exactly like being home and hanging out with my high school friends. This visit was in the making for 4 years and it was great to finally come the full circle from senior year of high school to senior year of college together. 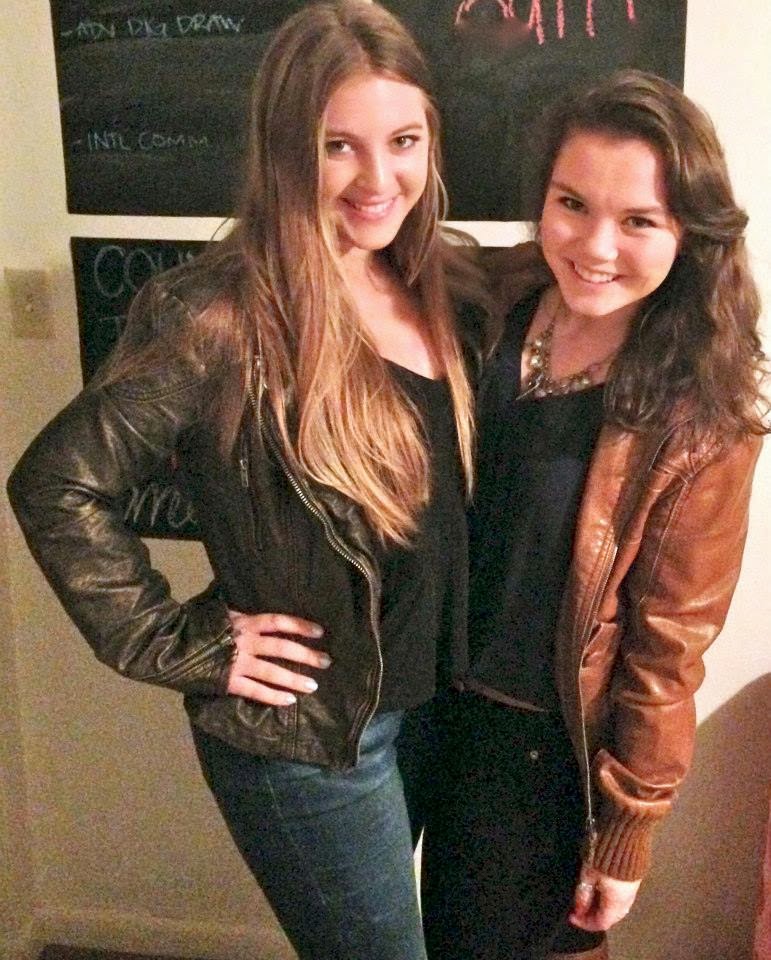 PS When I got up early to catch my plane, I ate half of my VooDoo donut. It had a pretzel stick through its heart and jelly filling on the inside when you bit it. Very clever and a huge relief that apparently I was starting to get my fill of donuts for the weekend. 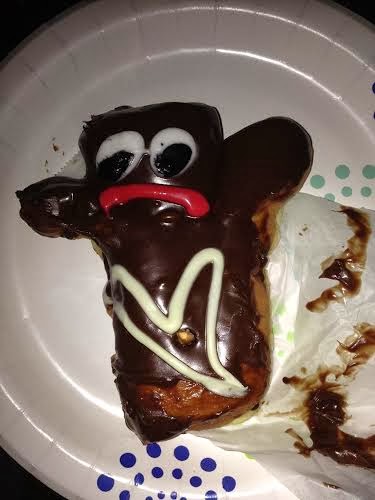 Posted by Watermelonsmiles at 3:13 PM