Two weekends ago, I spent the weekend dancing my life away at Coachella. While it seems everyone from LA makes the trek our to Palm Springs for the festival, this was my first time going. The price may have been outrageous and Weekend 2 was over Easter, but it was definitely an experience to be remembered. 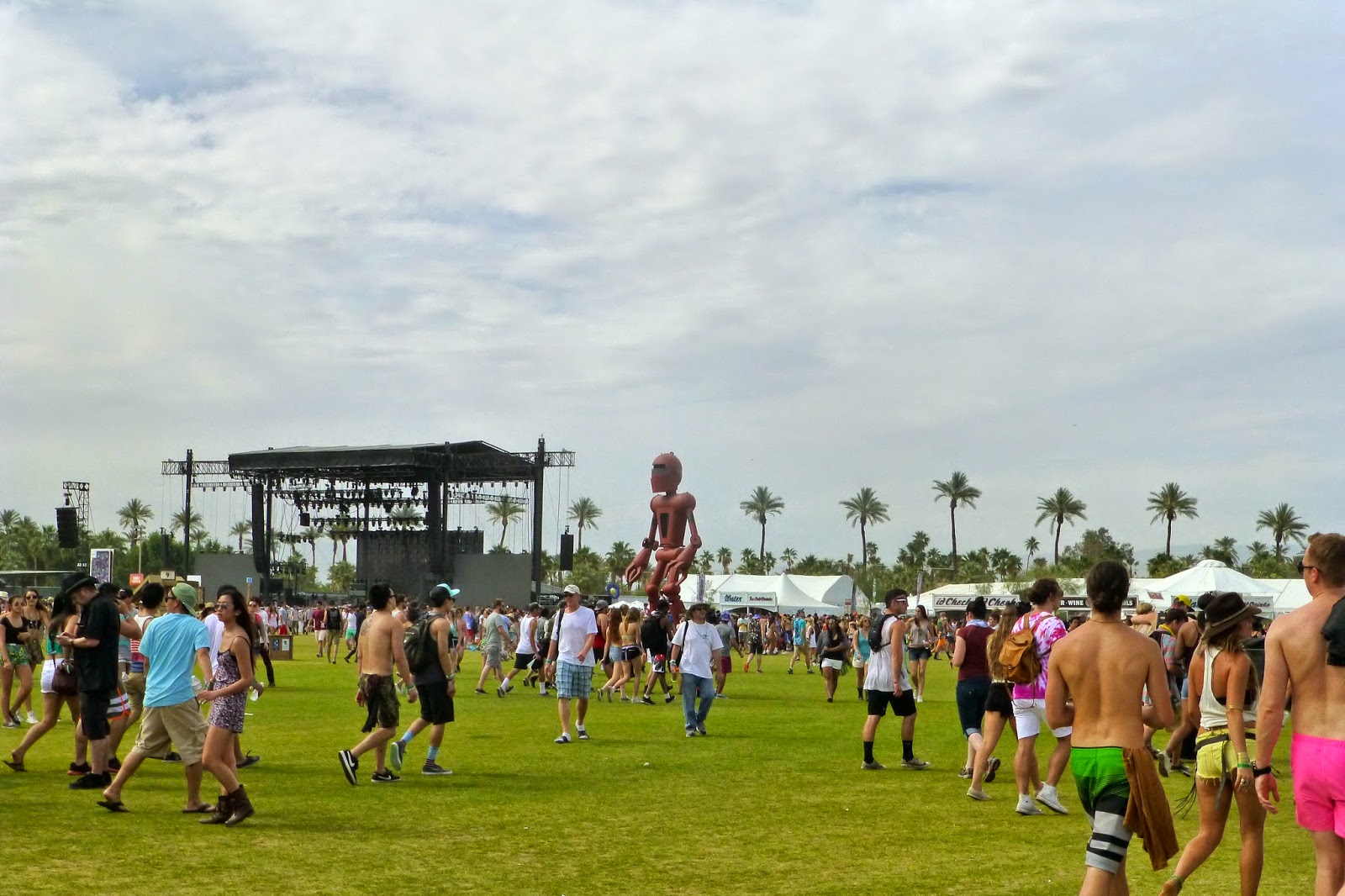 Half the fun of Coachella is picking out outfits to wear, but since the tickets are already so expensive I decided to limit my budget. After scouring my closet, I pulled out a gold lace vintage vest I bought in San Francisco in high school (and have never worn because it's a little much), a dress I already bought, and leather boots. I allowed myself to splurge on a new pair of jean cutoffs for $50 since my other pair is frayed past the point of comfort, a cheap crochet top and an $4 flower crown along with an $8 head chain. Armed with my outfits for the weekend, my friends and I started the road trip Thursday night complete with a Coachella playlist and newly downloaded Coachella app. 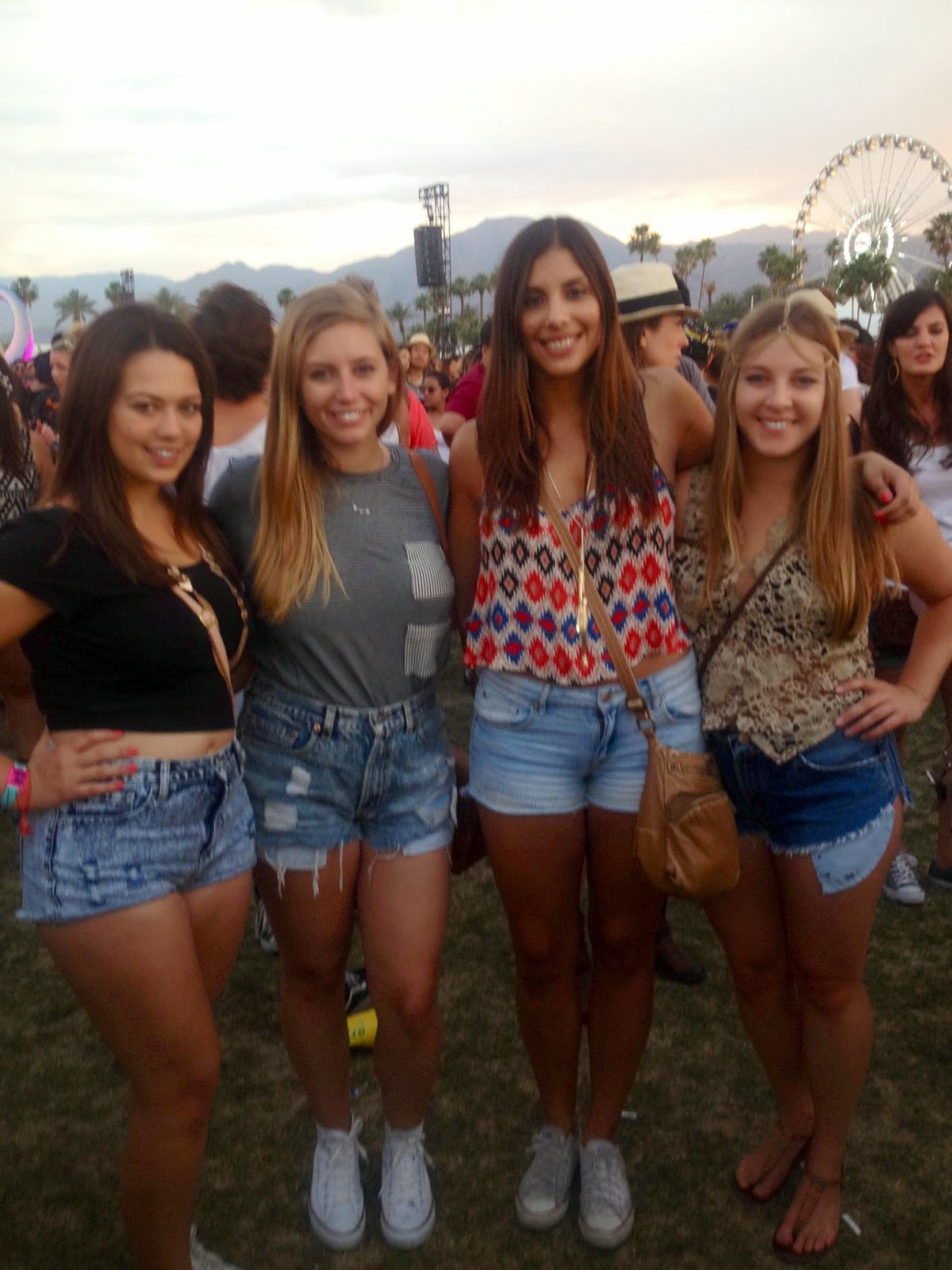 Even though this weekend had been planned for so long and a lot of money was saved for it, I think our whole group was a little overwhelmed by going. All of us had gone to Vegas at some point in the two weekends before, final projects were approaching, and graduation was (let's be real, still is) looming. Part of me was wishing just to have a weekend to lay around and sleep all day, but we all finally got in the spirit in the car as we used the Coachella app to start making a plan about who we wanted to see each day. 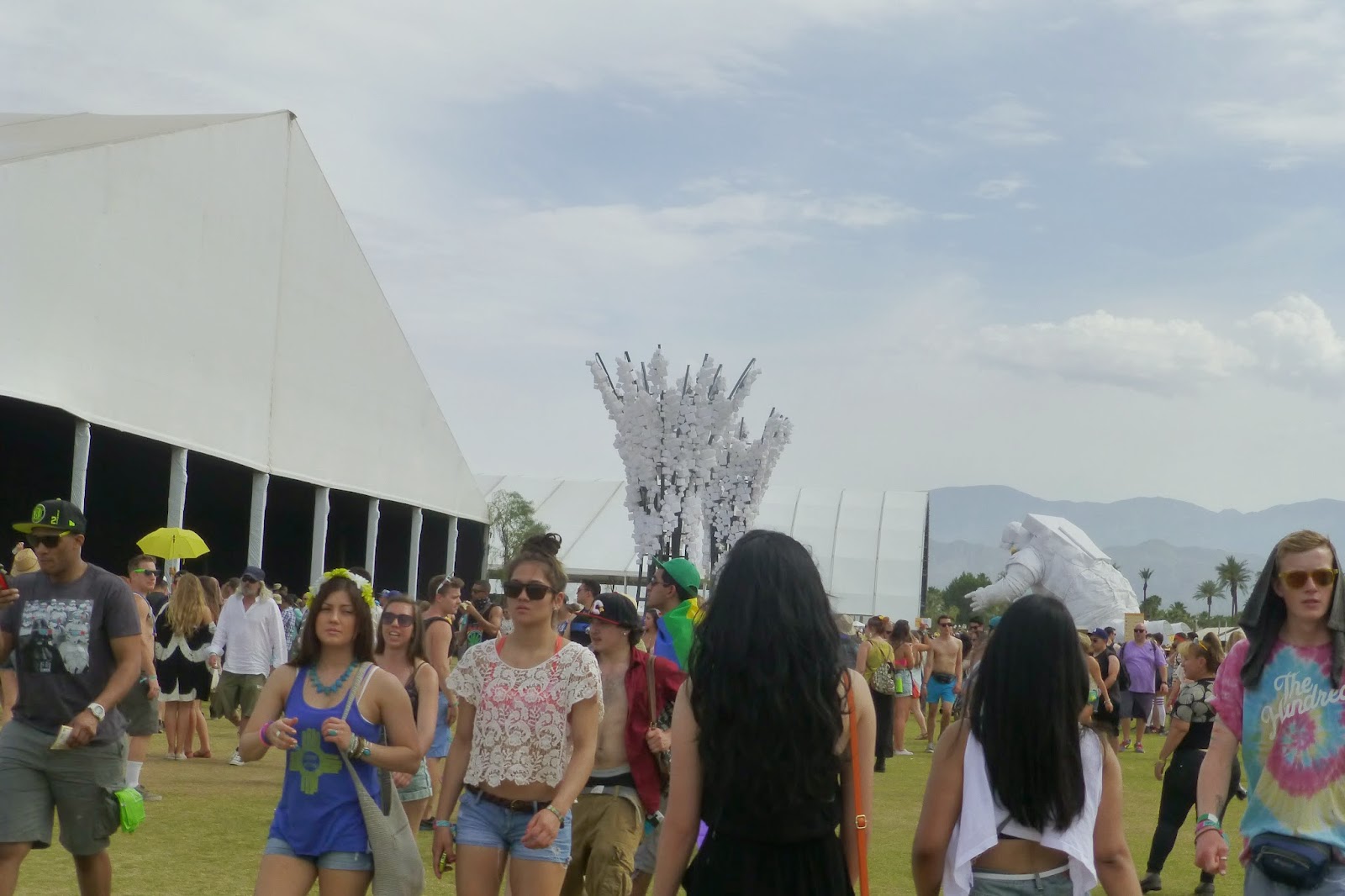 We were lucky enough to stay at Madison's place again, so we were able to escape the craziness and sleep in a real bed each night with air conditioning. We had bought shuttle pass tickets, so we had an easy way to get dropped off at the gates. 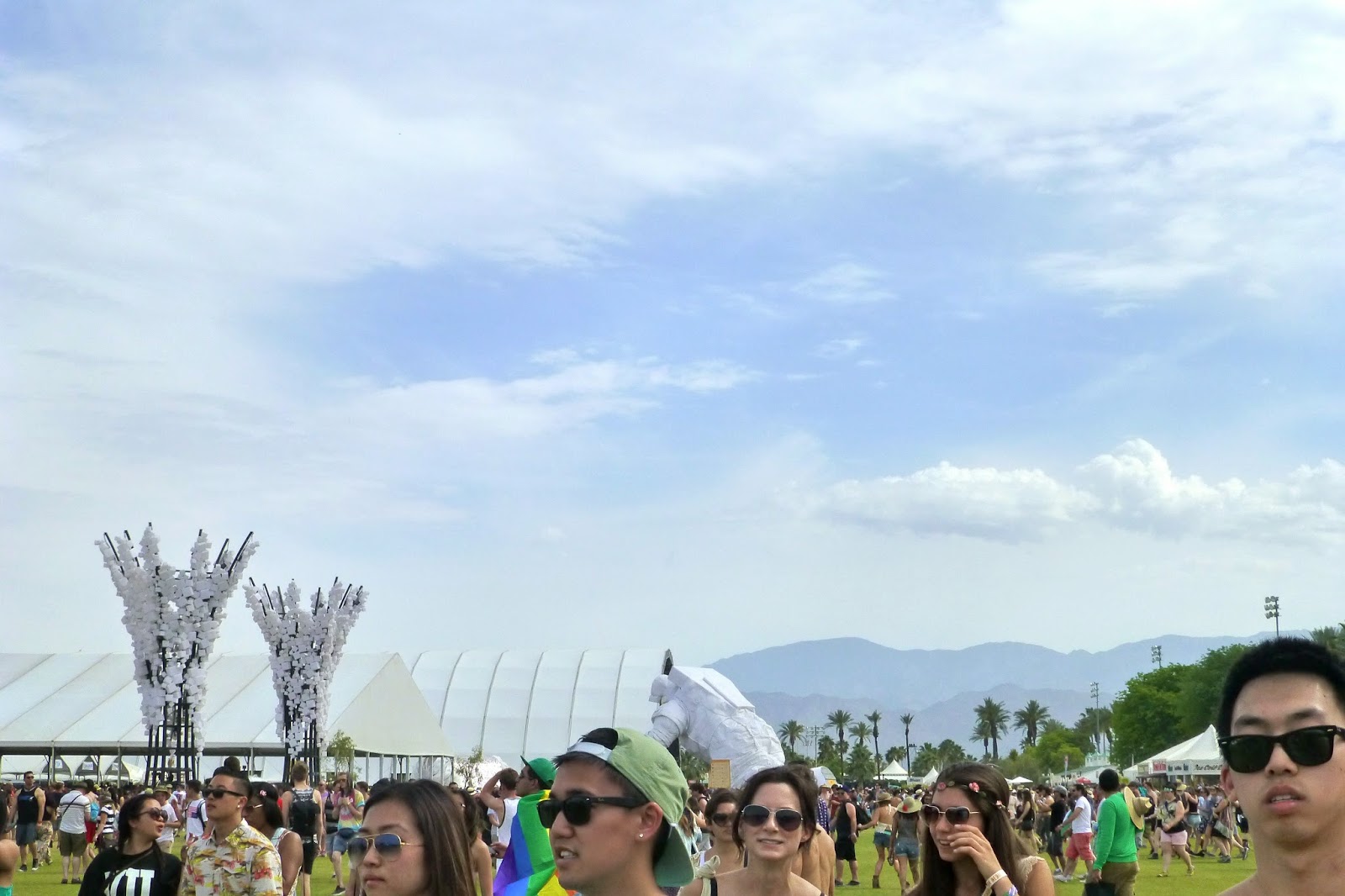 Our Friday began a little before 2:45 to see our first show MS MR. I knew a few of their songs, but I was blown away by their performance. I didn't realize how much I would like every song they played (plus their cover of Arctic Monkeys), and the lead singer looked like she was having as much fun as we were. We all decided that we would recruit her as a new best friend, and once their set ended we hunted down some watermelon slices on our way to Aloe Blacc. 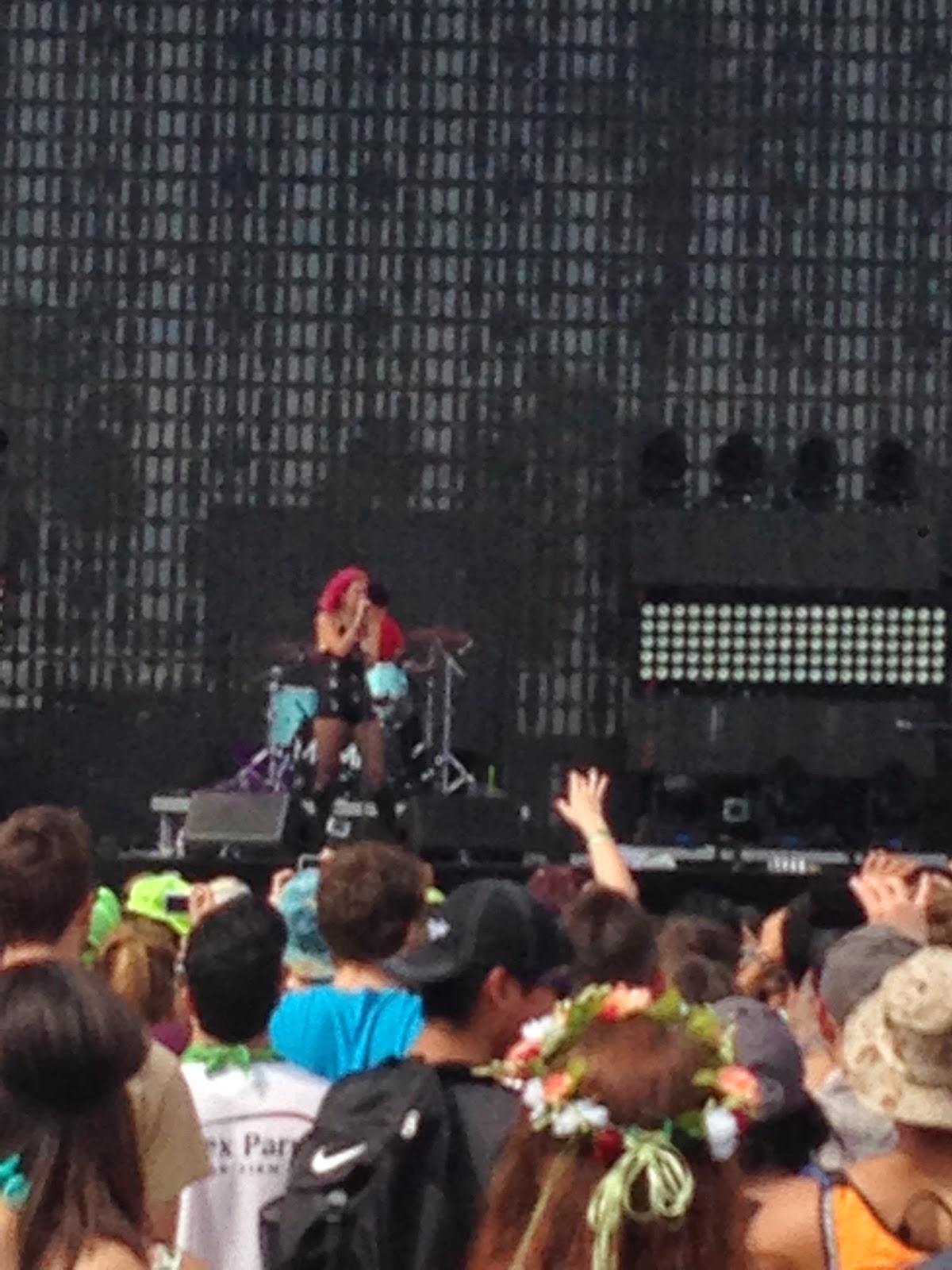 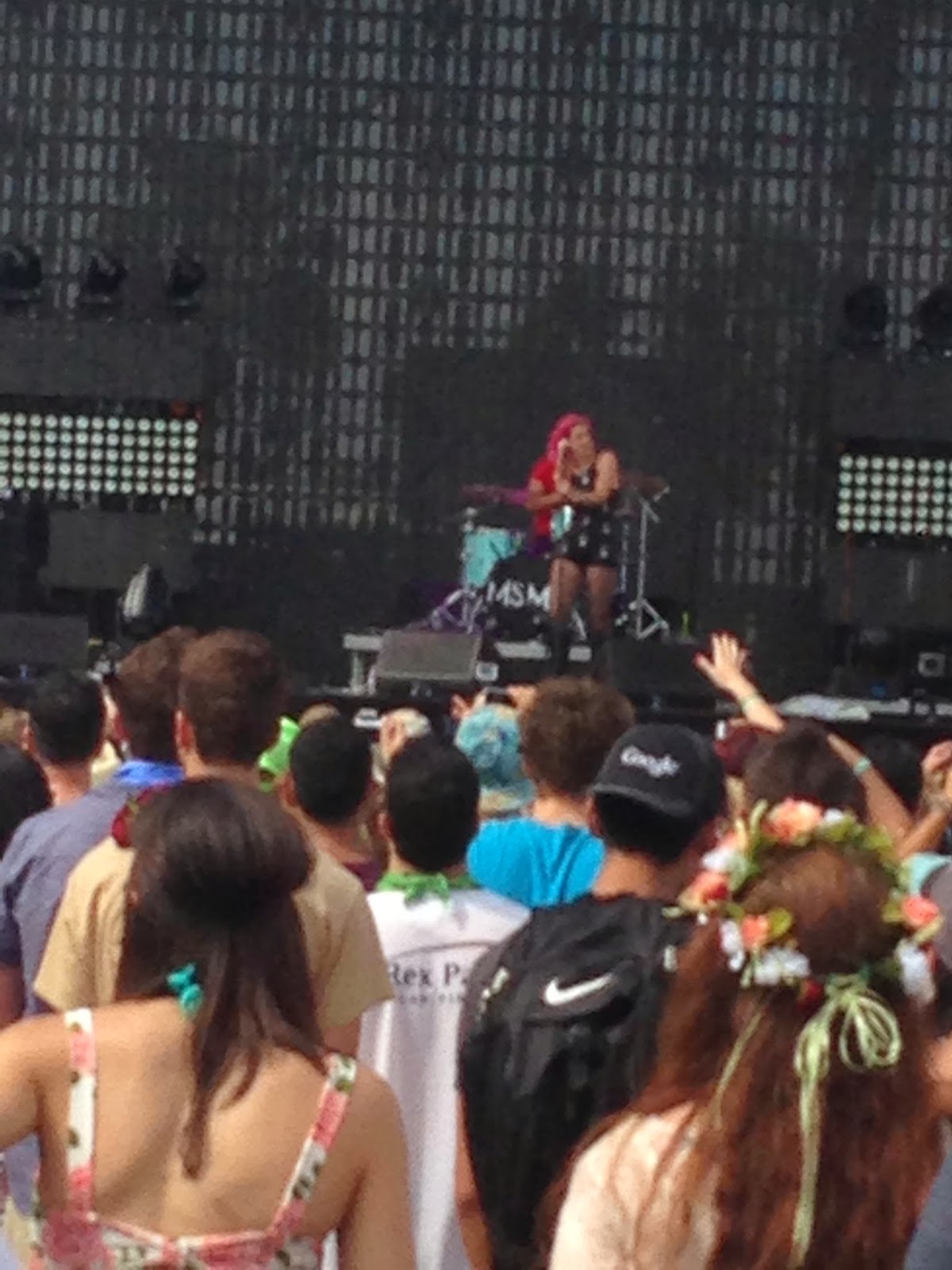 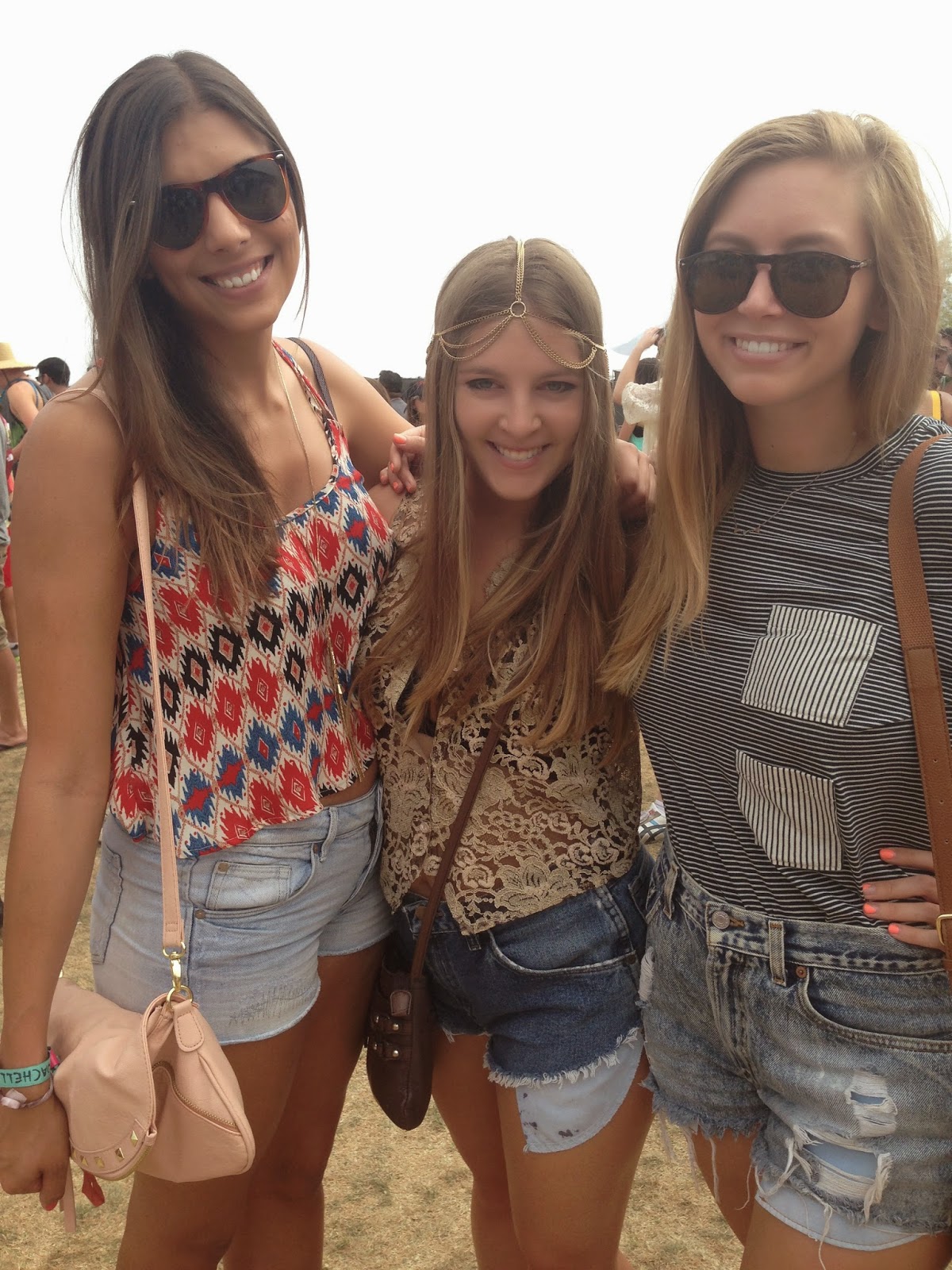 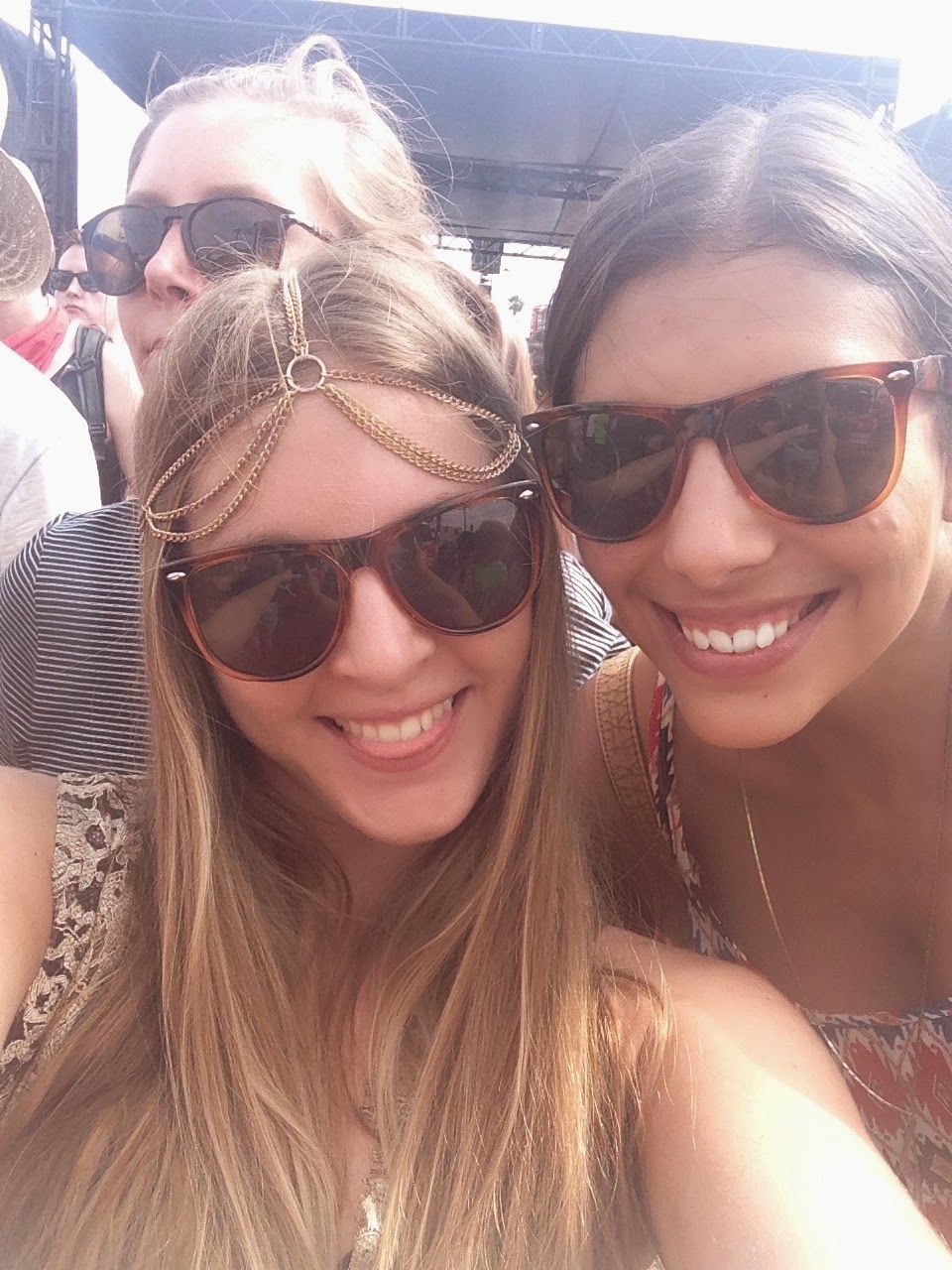 Our feeling from the night before was completely gone after watching our first band and running around the grounds. We checked out some of the art pieces on our way to the tent, including an obligatory selfie at the large group of mirrored rectangles. But, my favorite was definitely the giant hollow caterpillar that was made out of flowers, grass, and succulents. It was not only pretty and hippyish, but also gave necessary shade while we waited for people to run to the restroom. 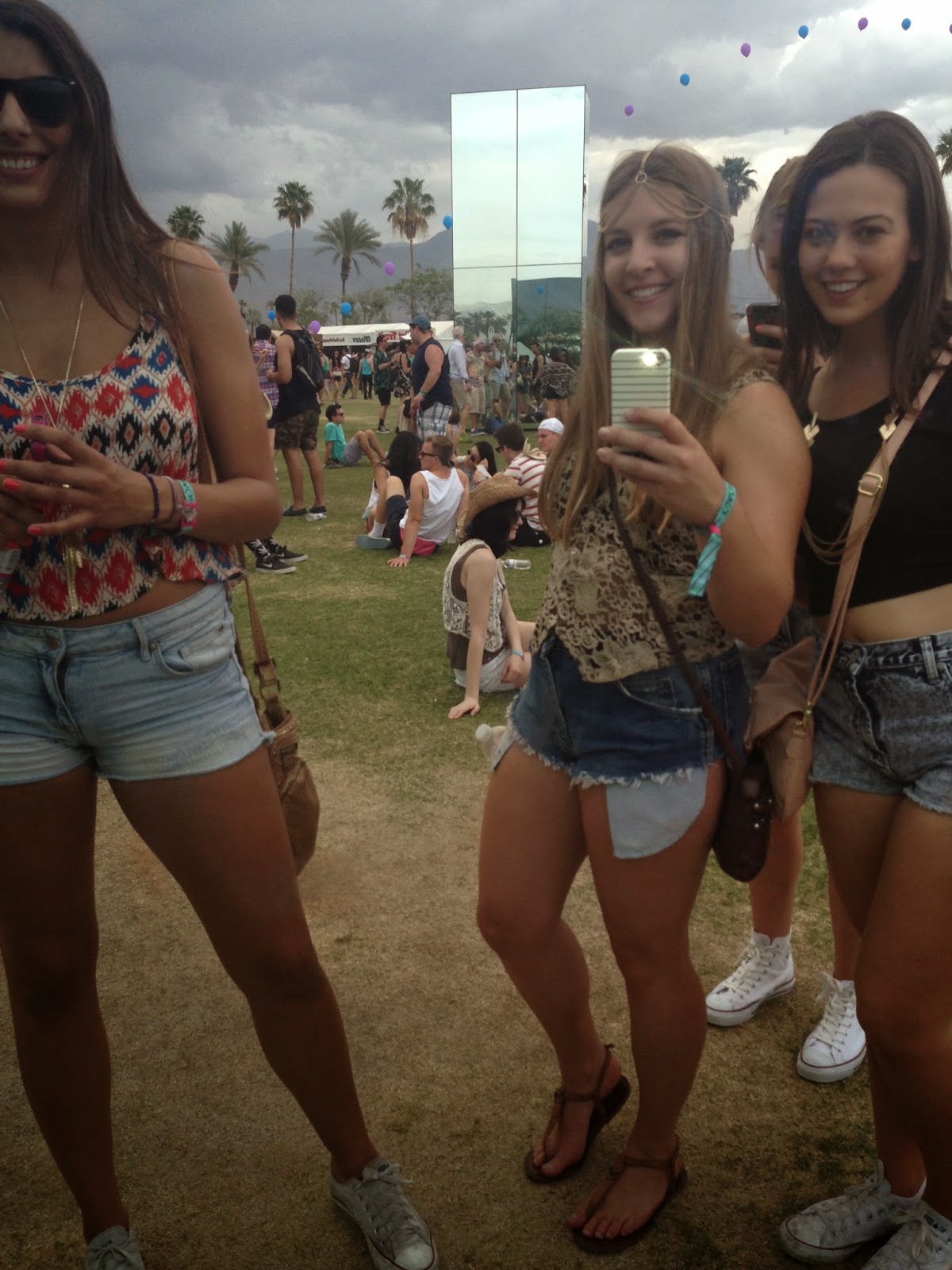 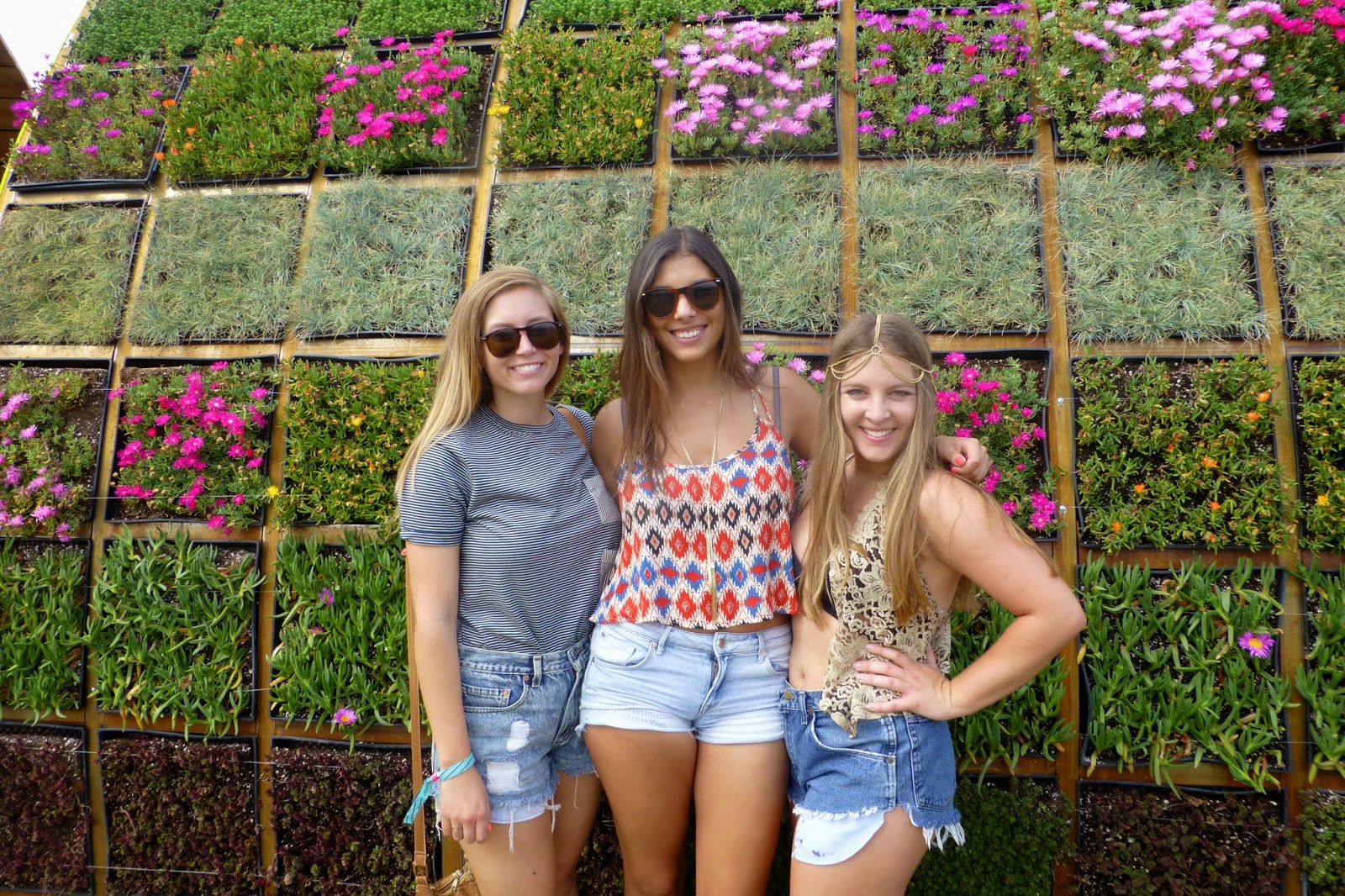 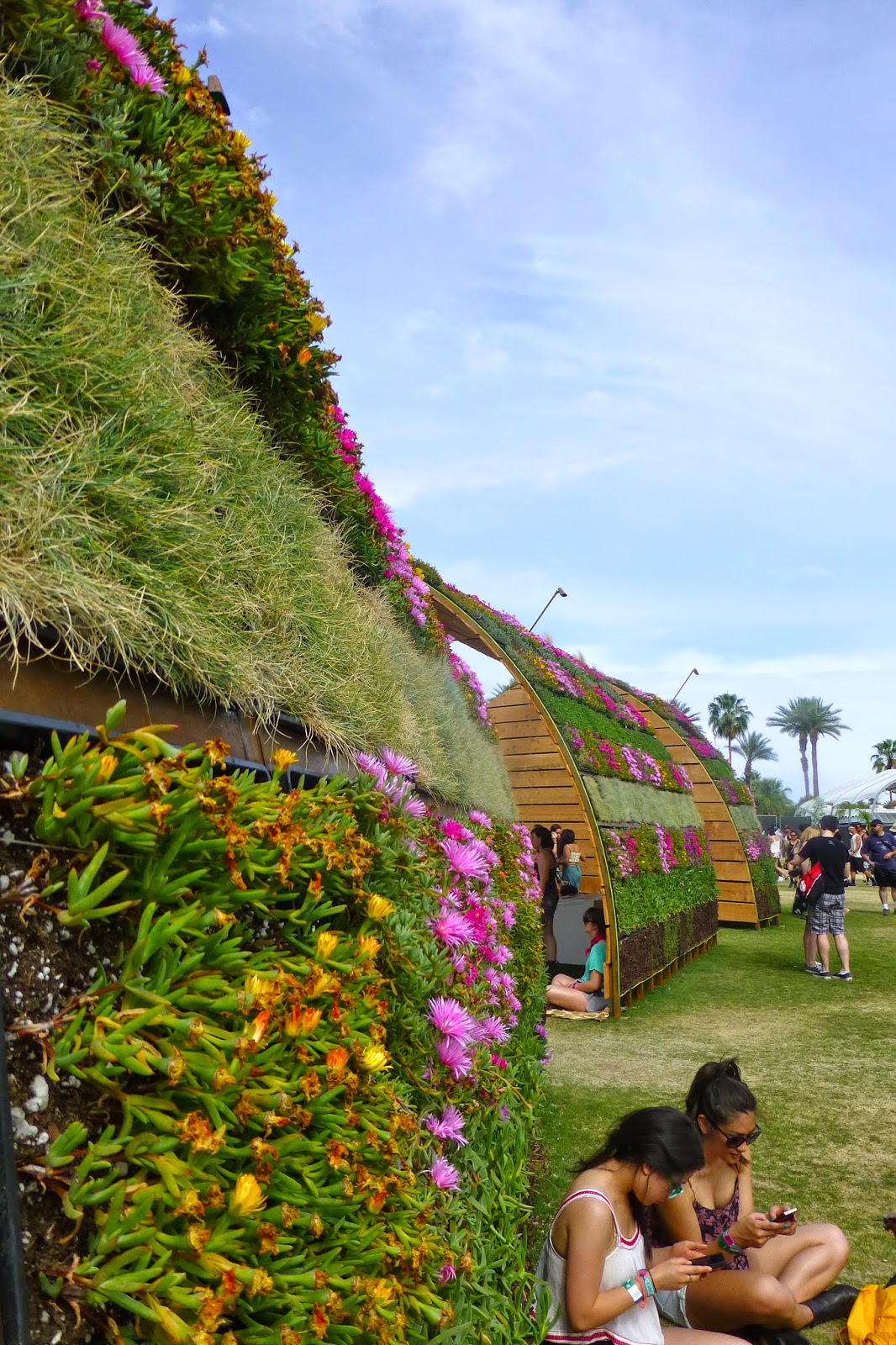 After some watermelon photo ops--note the head chain and vintage vest--Aloe Blacc began. He was really great, and once we heard the songs we were excited for we left a few minutes early to make it to Haim. 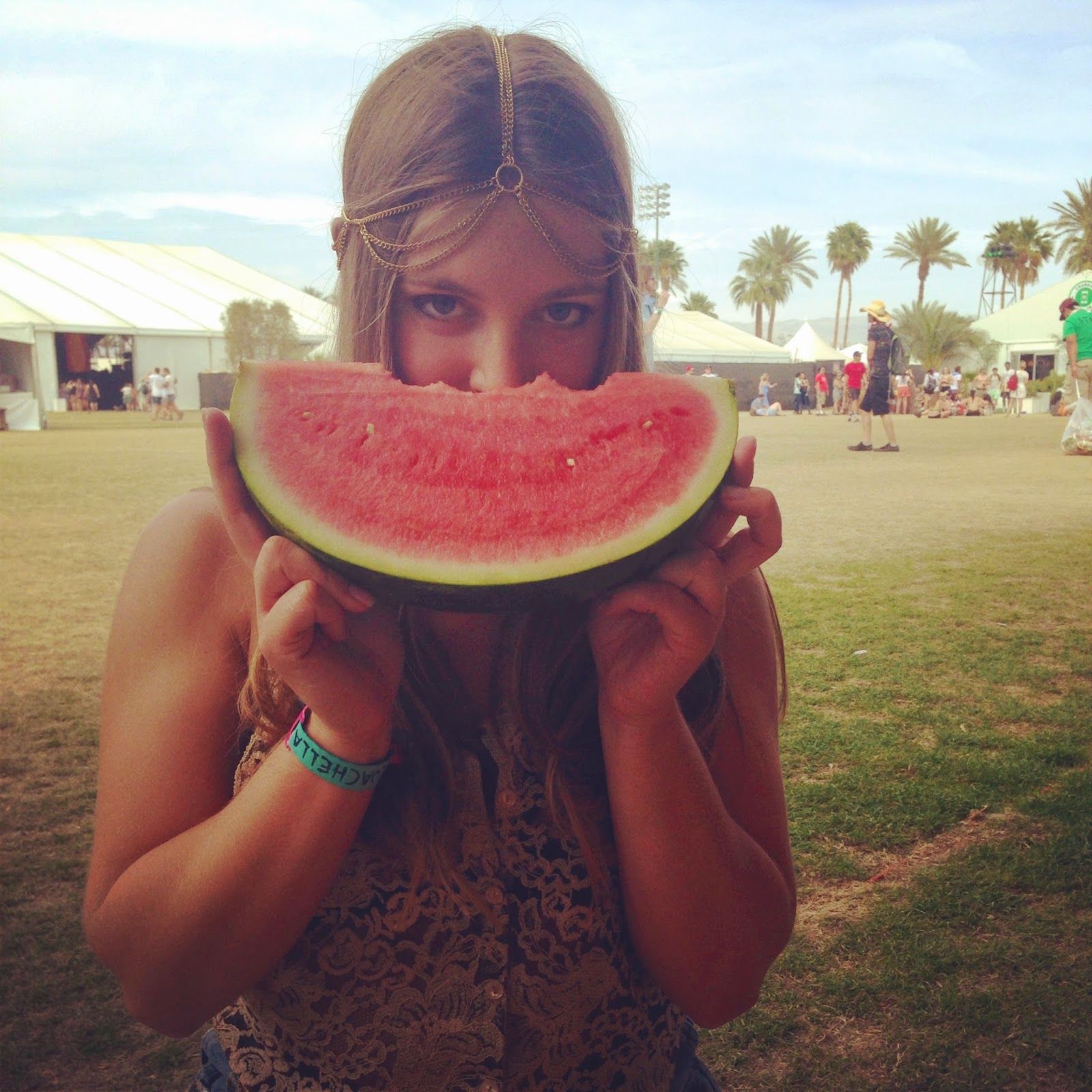 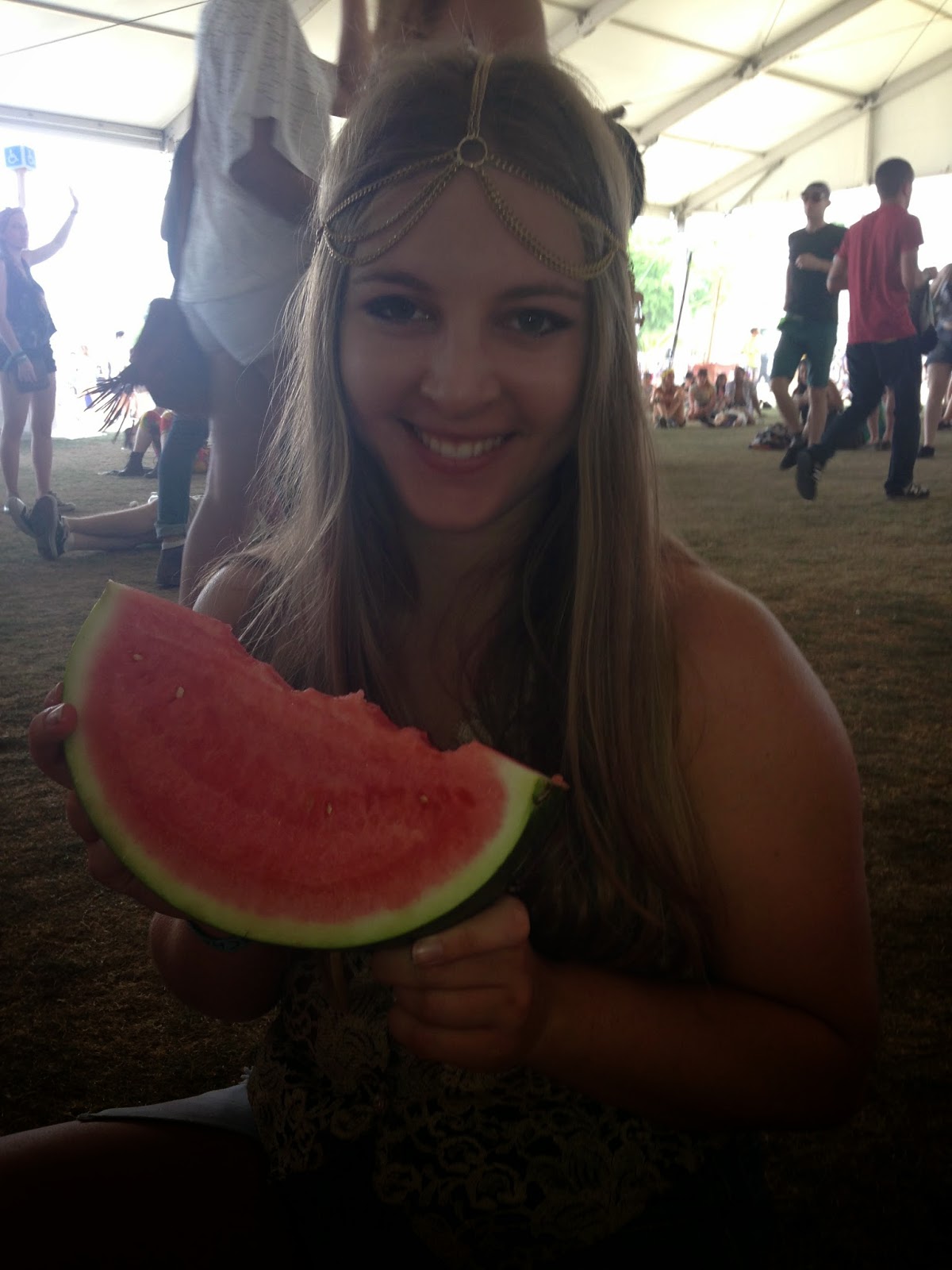 It was nice to be able just to sit on the grass, but I wasn't really impressed with them. I think their whole attitude isn't for everyone, I enjoyed being able to just hang out. The only down side is that by the time we made our way to Bastille the tent was so filled that even all the pushing in the world couldn't get us inside. We heard a few songs, but not being able to see or move had us leaving before the set ended to grab some food. 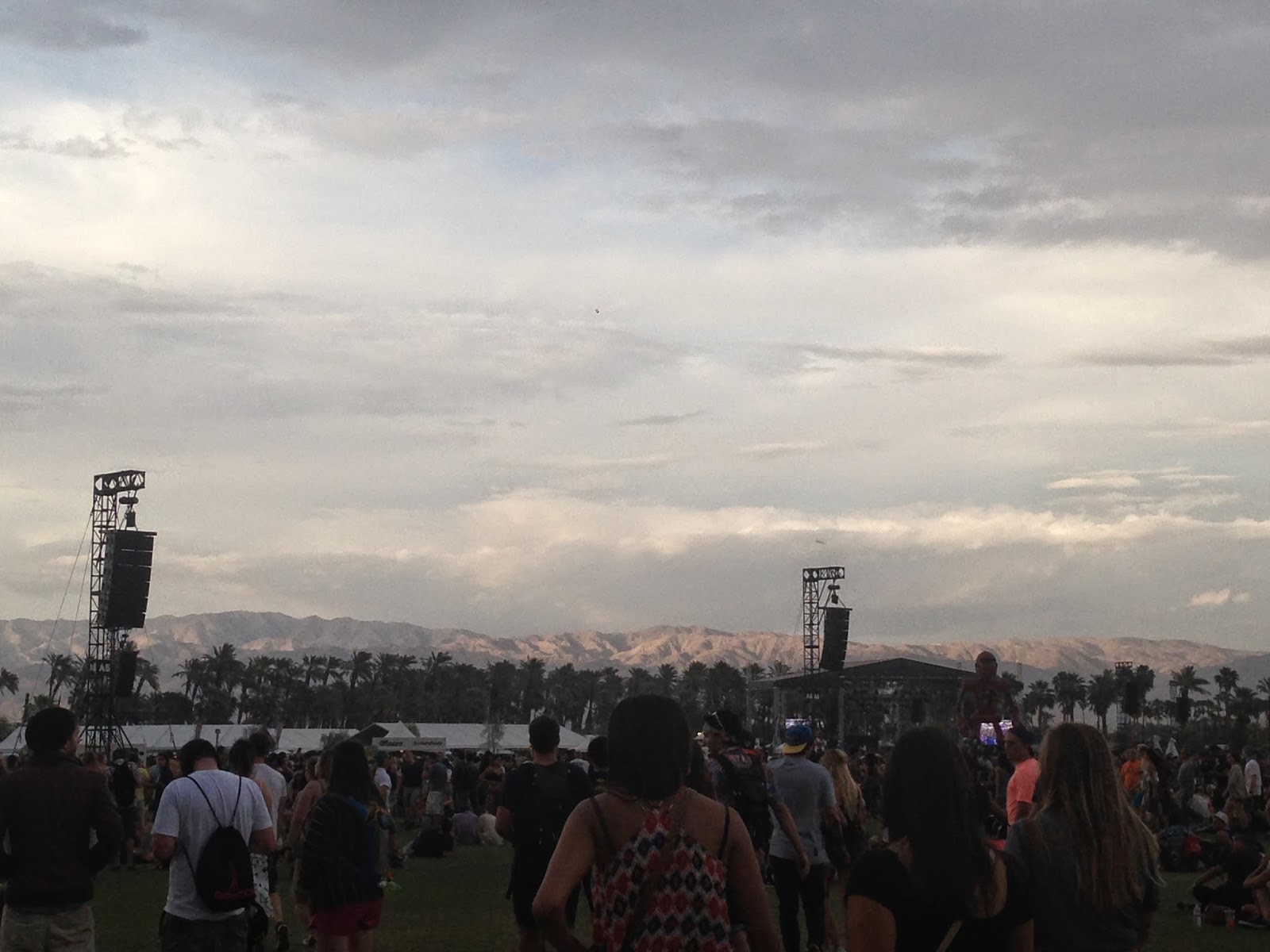 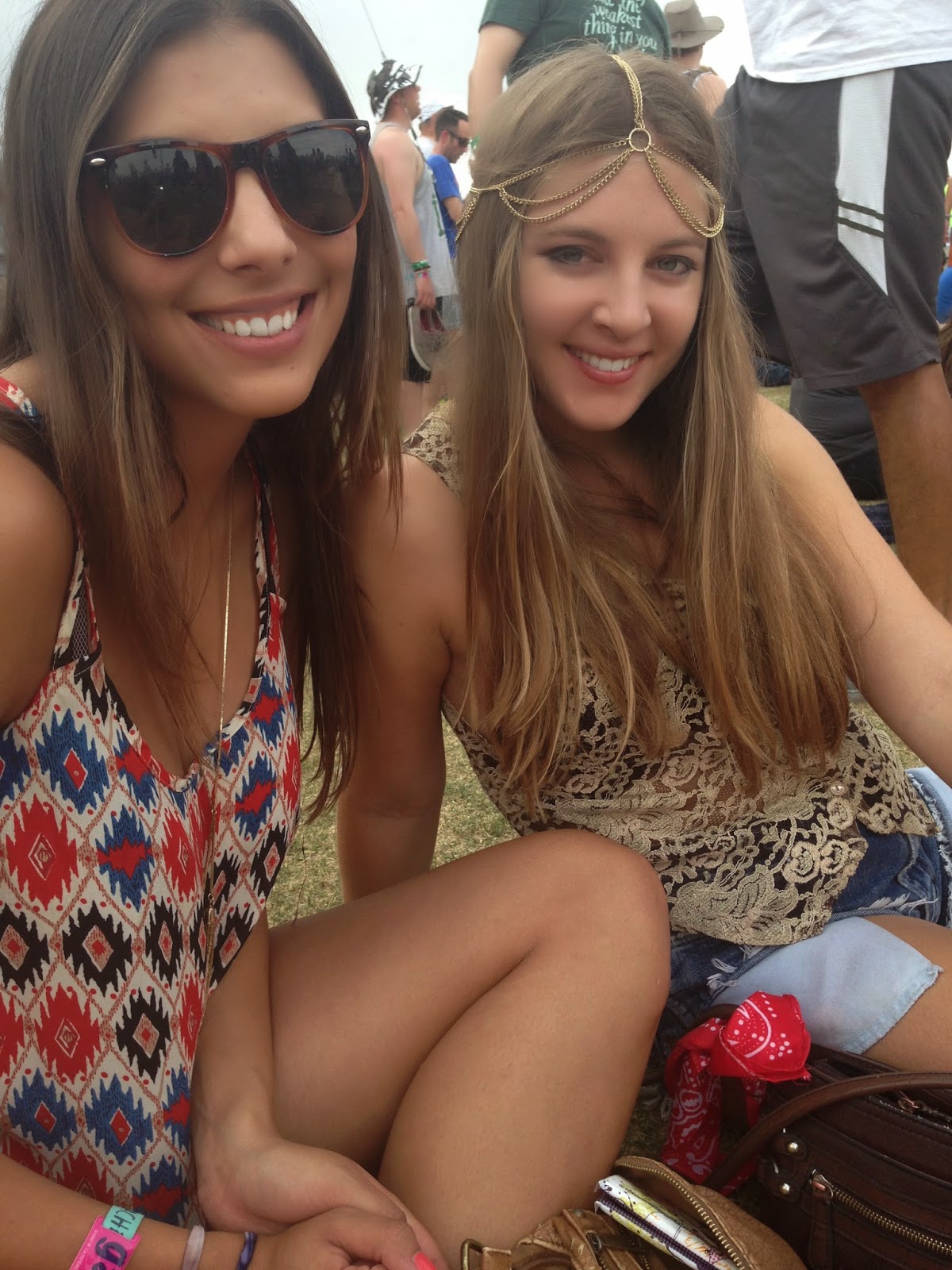 I had an amazing gyro followed by some fries from the Pink's hot dogs stand for dinner which was delicious (and expensive). After we headed to the Coachella stage to see Ellie Goulding (great) followed by  Chromeo. I didn't know them very well, so I wasn't really into it, but I was excited to stay at the Coachella stage so we could get close  for Girl Talk. 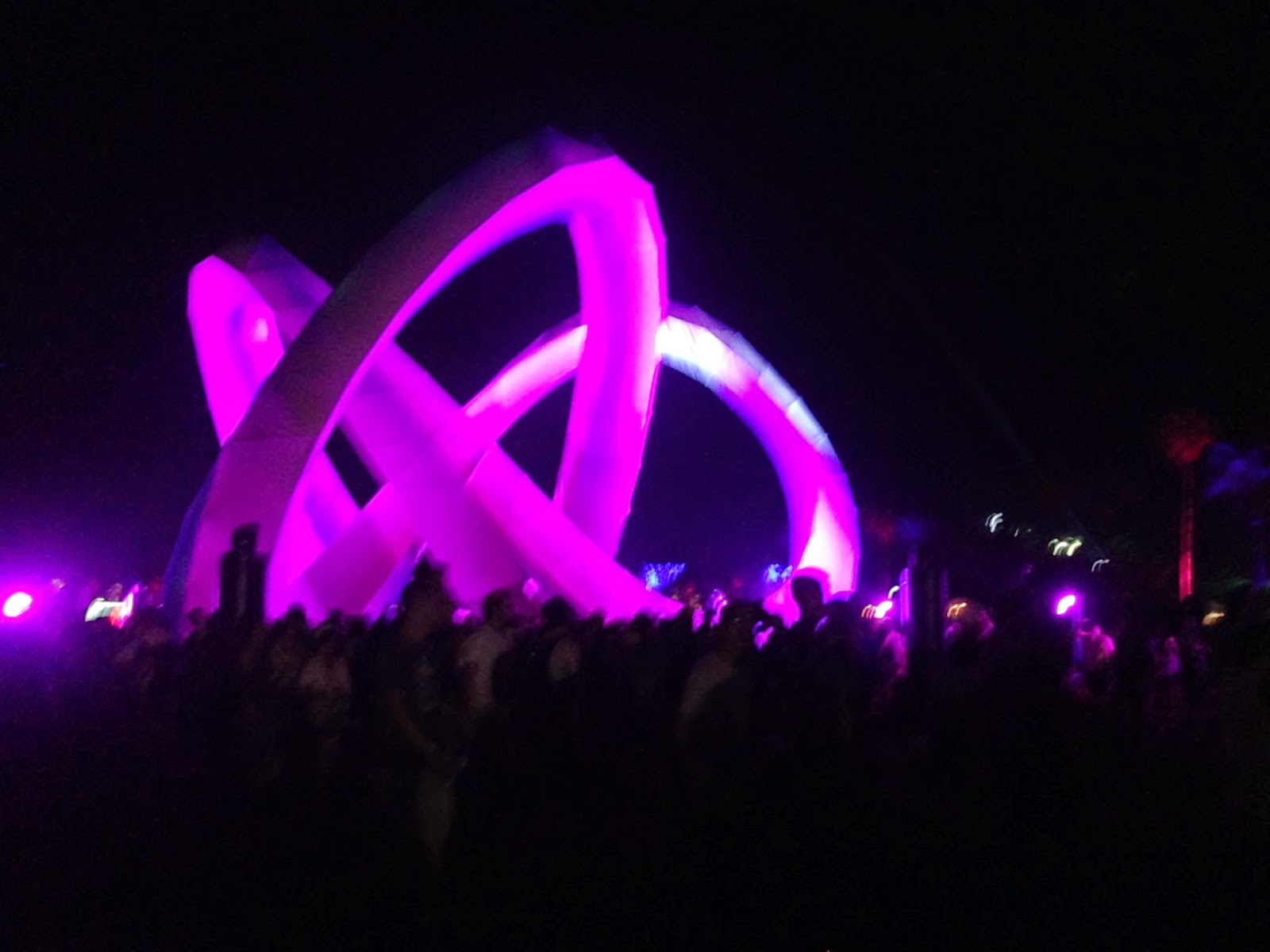 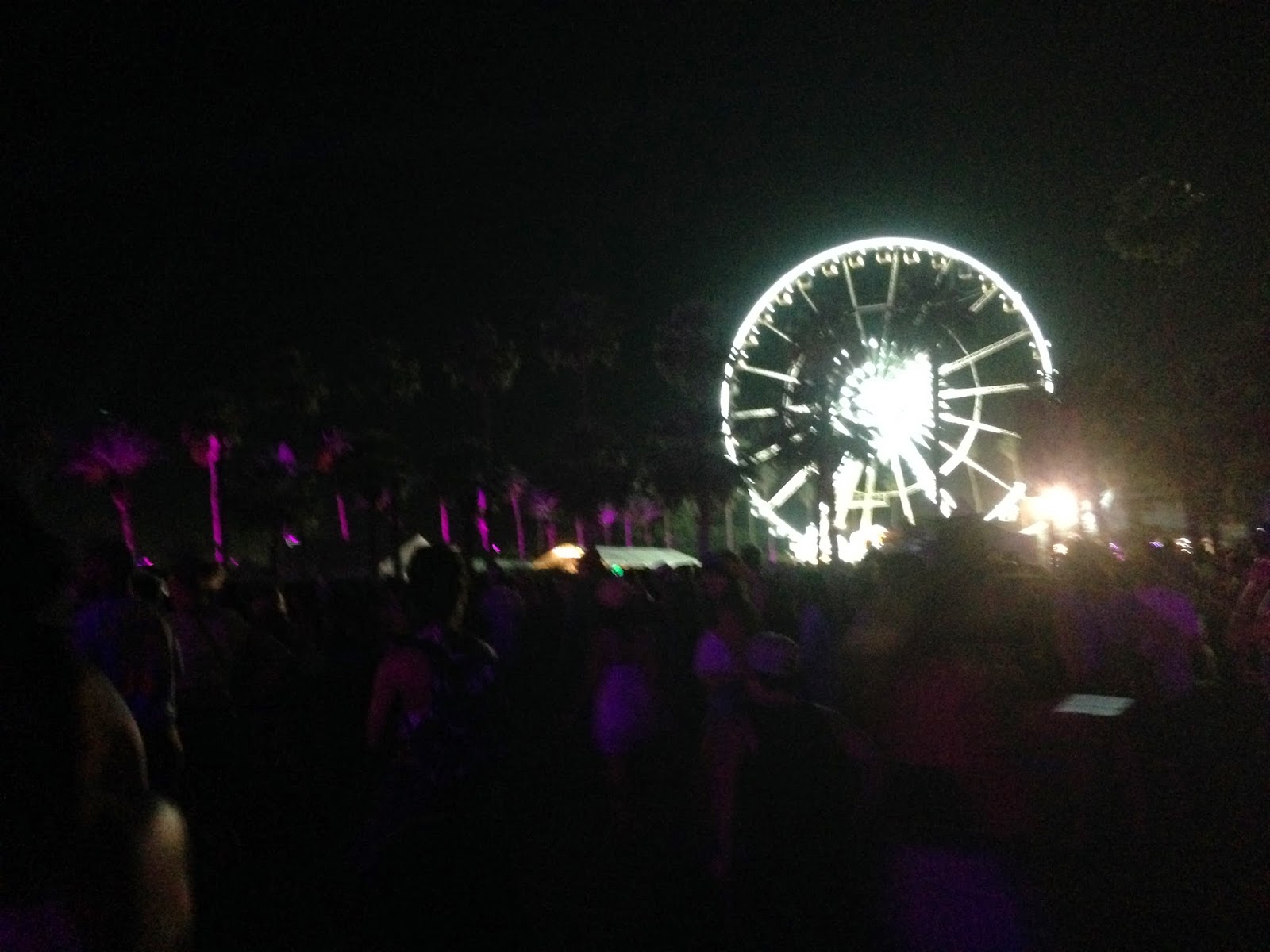 It was worth hanging out because Girl Talk was amazing, and there set was complete with fun dance songs and confetti being blasted from the stage. Finally, we waited in the area for Outkast, and while I thought it was fun, I didn't know Outkast well enough for an hour and a half set. 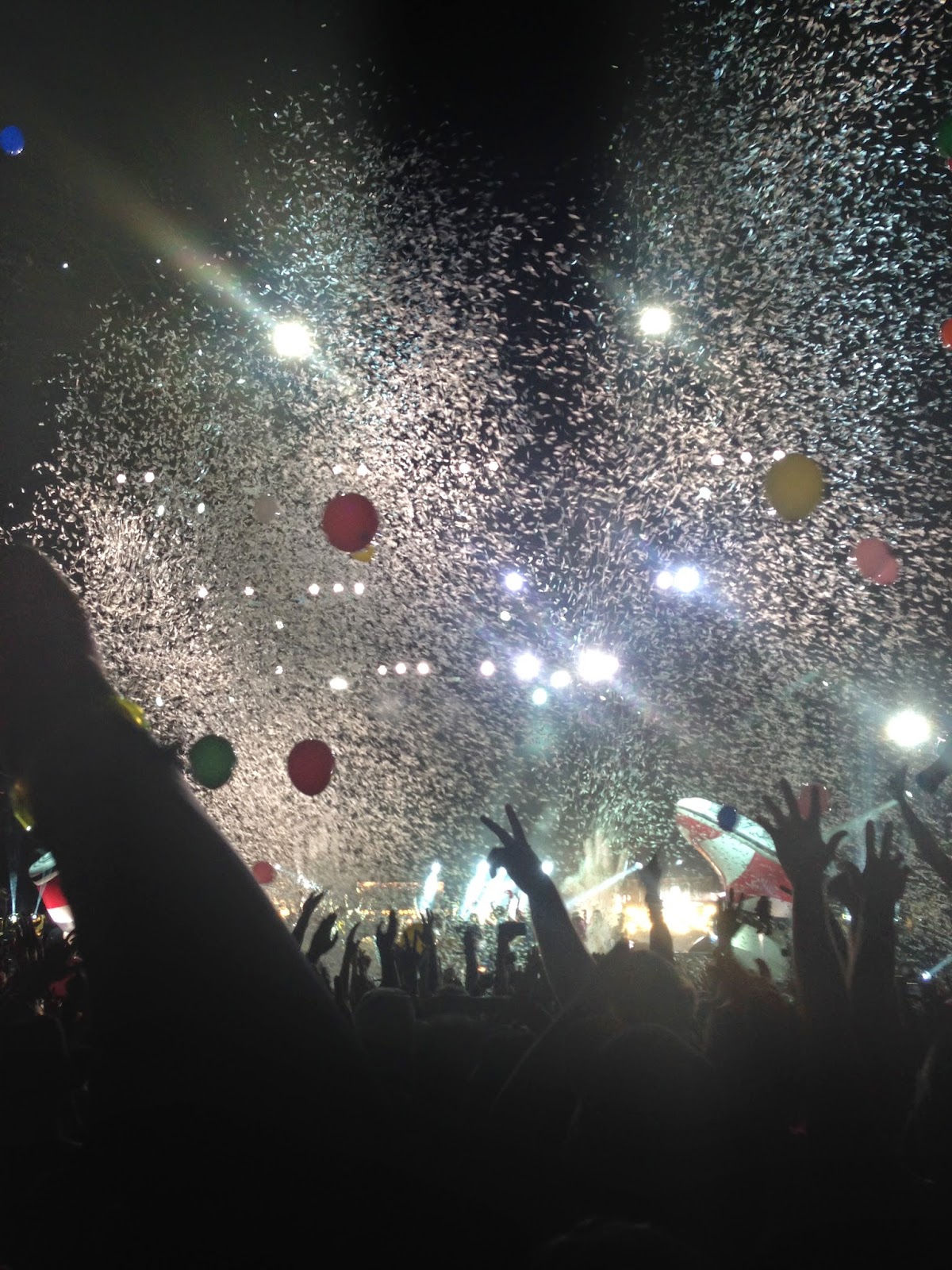 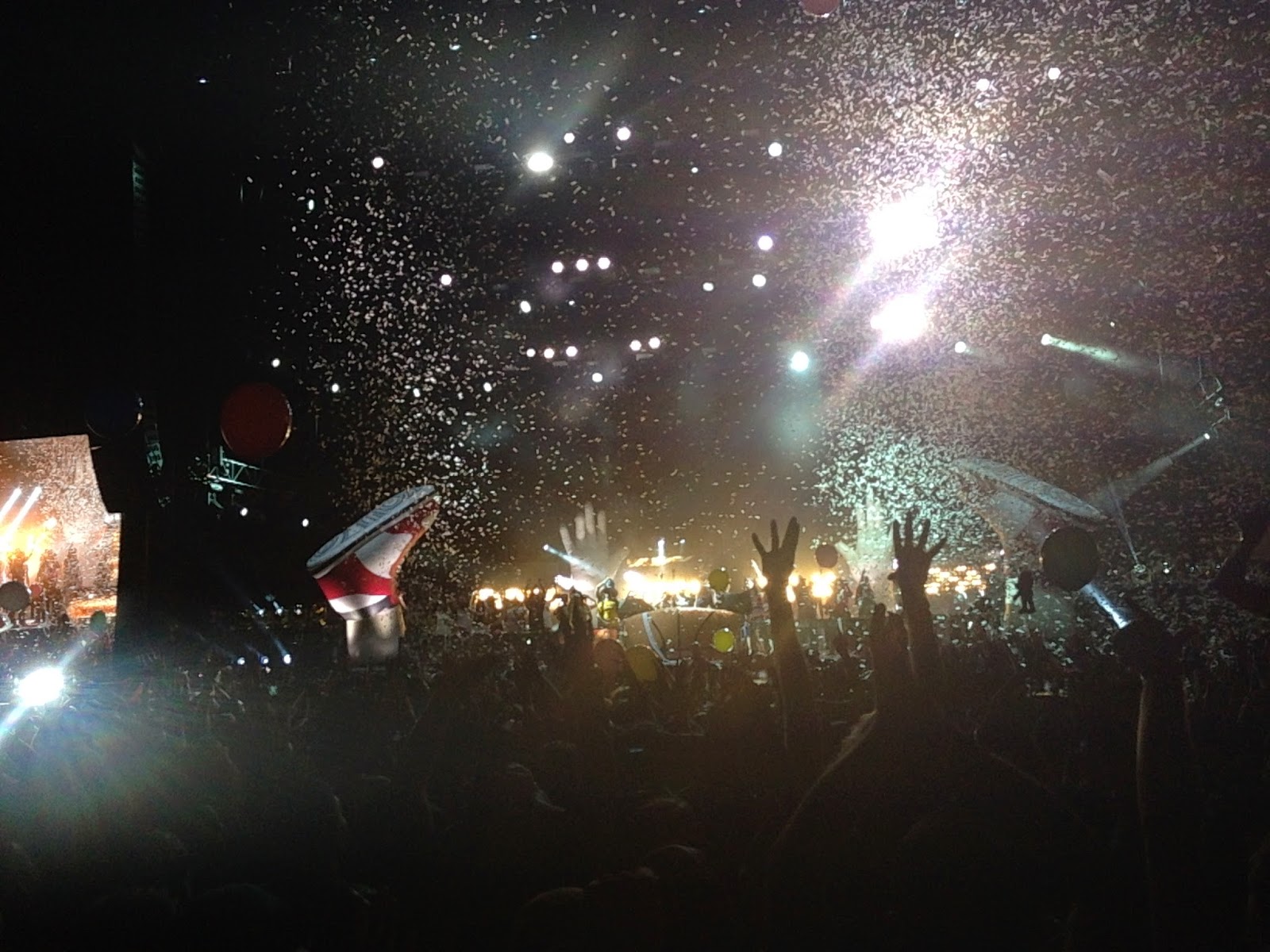 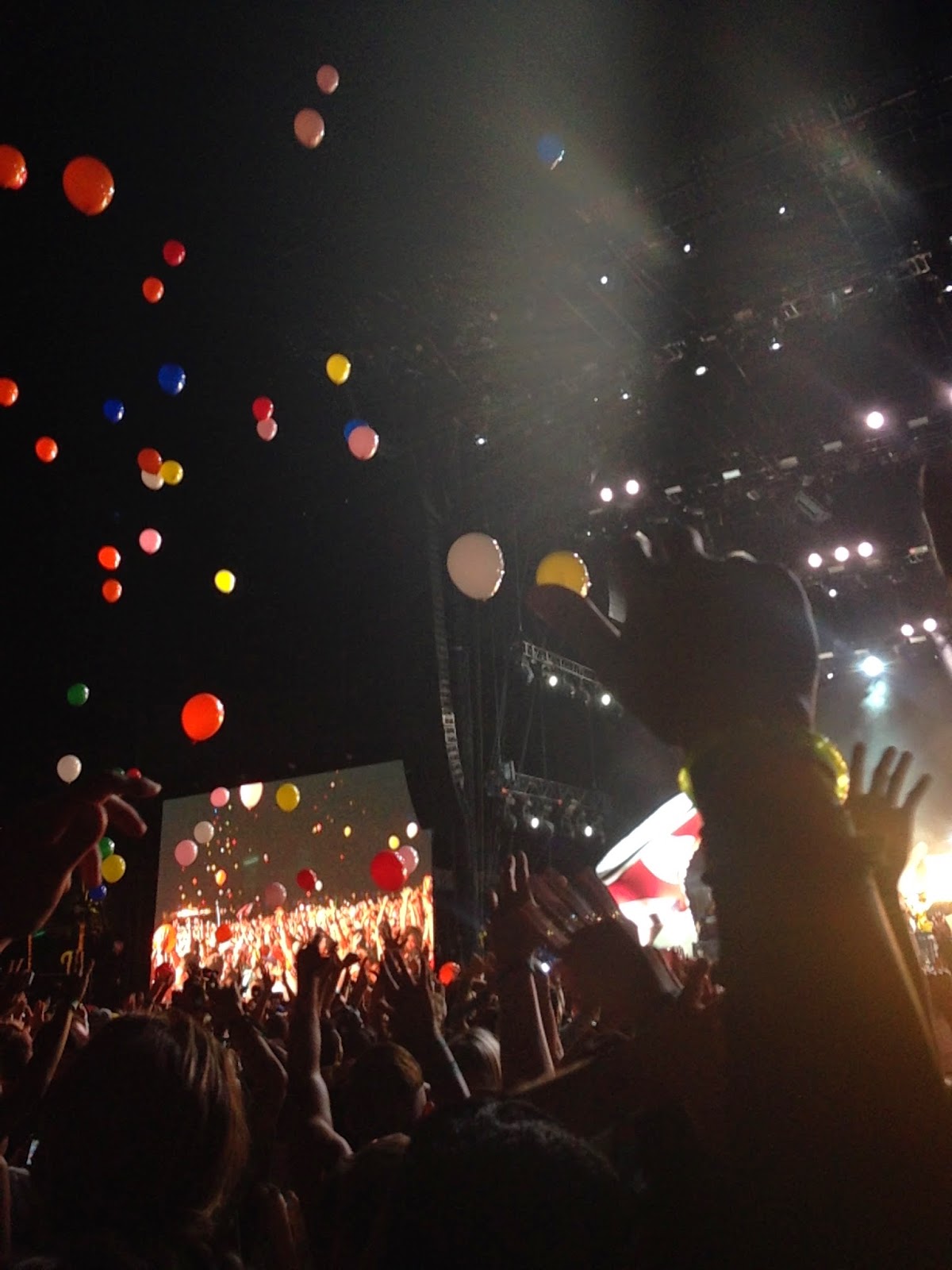 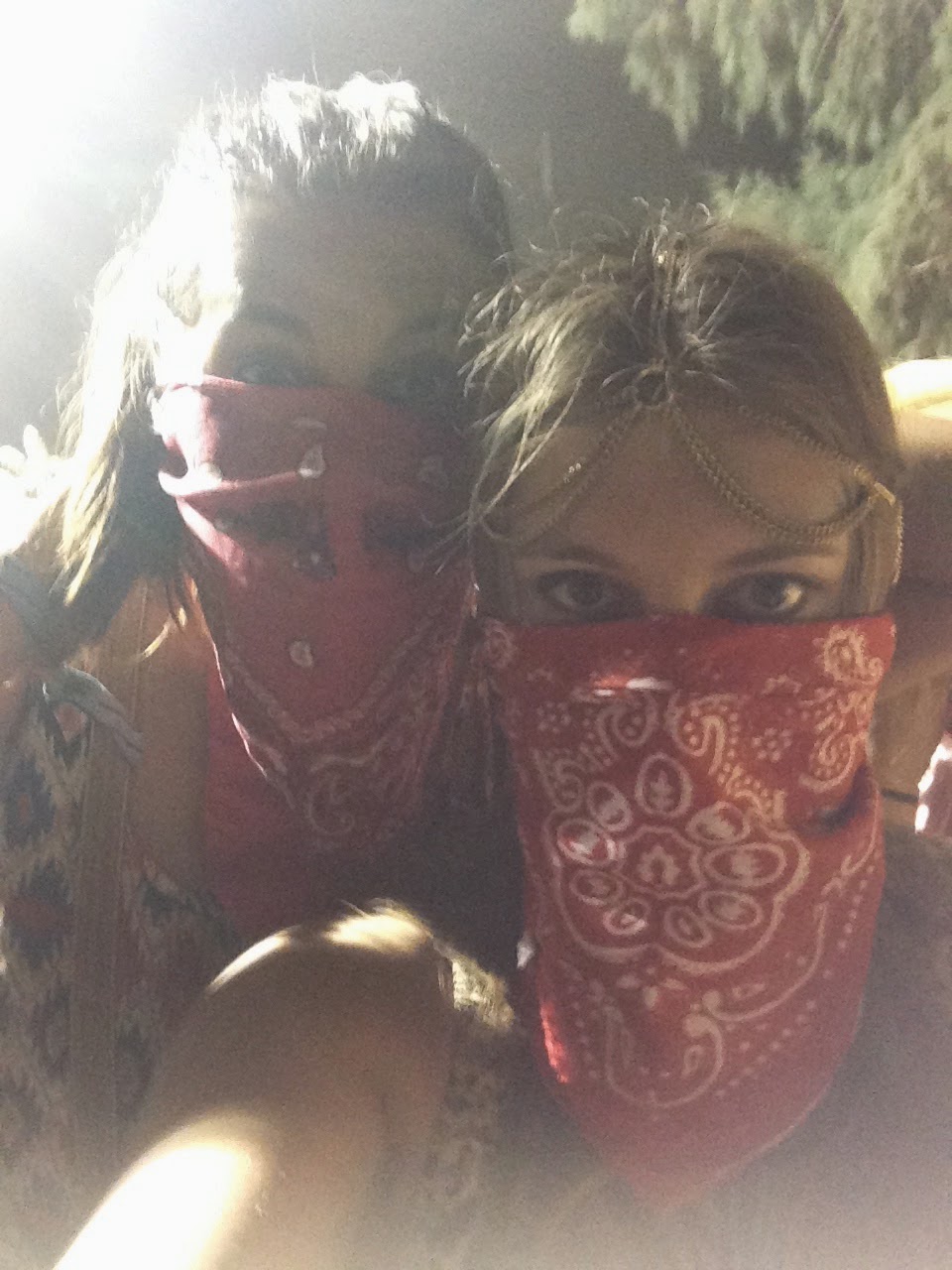 We left day 1 feeling happy and exhausted, but we still managed to have some fun avoiding the dust storms with our handkerchiefs. PS handkerchiefs were the best thing I could have possibly brought. They kept dust out of mouths and nose walking back and also served as seat when hay or dirt was irritating. Once we were back at our place, we all went to sleep happy and excited for the rest of Coachella.

Posted by Watermelonsmiles at 4:01 PM