My last blog post about my Italian "spring break" ended with my friends and I getting up early on Friday to catch our train to Sorrento. After a relaxing and quick train from Rome to Naples, we got on a train that was packed so full that we had to stand in a packed space with no air conditioning. But even that couldn't take away from the beautiful sights and places that we passed through. Huge green hills, small Italian towns, and the ocean(!) made the trip go by quickly. It was the first time I had seen the ocean since Copenhagen in February (but I was literally freezing), and it was really exciting. Plus, the train definitely gave me the "backpacking through Europe" vibe--which might have had to do with the fact that I had packed for 5 days in a slightly larger than average school backpack (a source of pride throughout the trip).

Once in Sorrento we walked to our hostel/hotel, and looked around at the town. Sorrento is famous for its lemons, and there were lemon trees and orchards everywhere. It was beautiful and smelled amazing. We stayed at the Florida Hotel, and even though it was cheaper than our Rome hostel, it was much nicer. They had a great little pool with some lounge chairs, so we tanned by the pool while we waited to check in to our room. This hostel also had a 5 person room, so we all got to stay together. 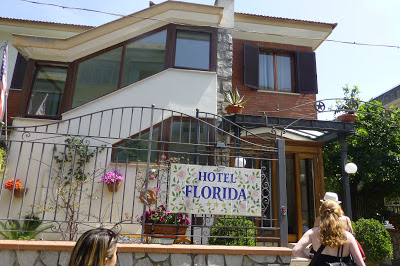 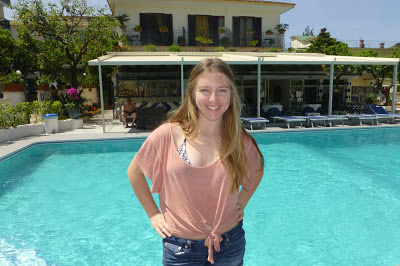 After dropping our stuff off, we walked back towards the center of Sorrento. We admired some of the best ocean views I've ever seen (PV is still up on that list too), and grabbed some photos before finding an amazing street full of shopping. It was a very Italian road-narrow and crowded-with everything from souvenir shops, leather stores, and bakeries. We all immediately fell in love with ceramic wine stoppers, and I don't think anyone left without buying something. After walking through the street (and deciding we would come back), we went to go find lunch. 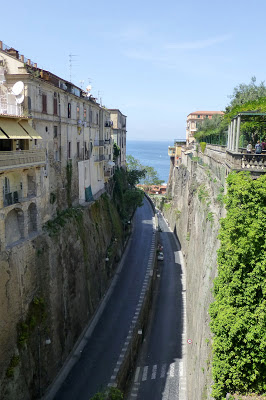 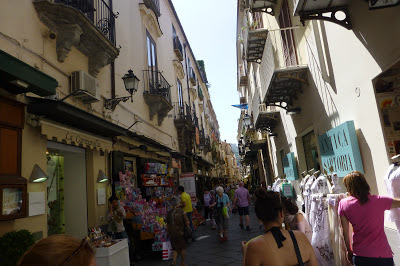 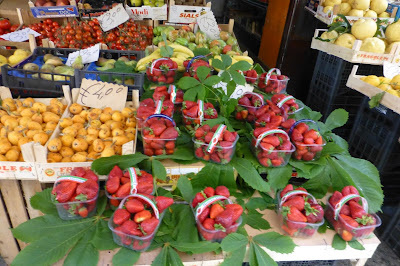 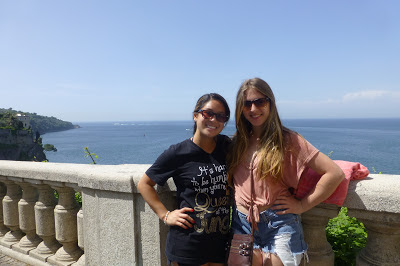 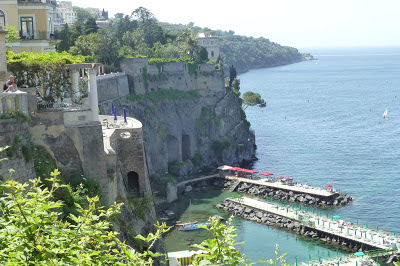 We ended up finding this beautiful hotel restaurant with a gorgeous view. The host gave us a table where we could all sit and see the ocean, and after a few more pictures we tried to decide what to order. I decided to get a mojito. Even though it was probably one of the more expensive drinks I've ever purchased at 11 euros, it was probably one of the best drinks of my life. The mojito was huge with tons of fresh mint, and perfect for the warm weather. Every time I see a picture of it, I immediately crave another one. I also ordered linguine with mussels, and it was also great. Give me anything with seafood, and I am a happy camper. Overall it was a pretty expensive meal, but the view and the drink alone made up for it. 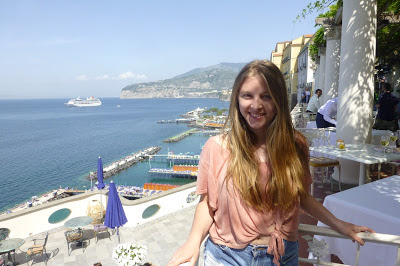 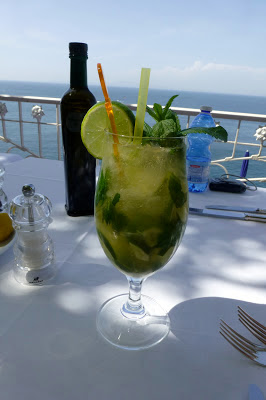 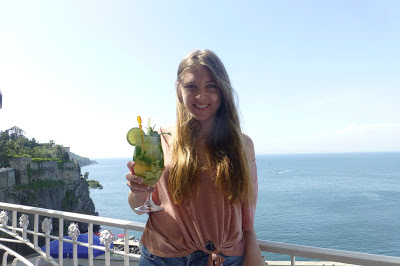 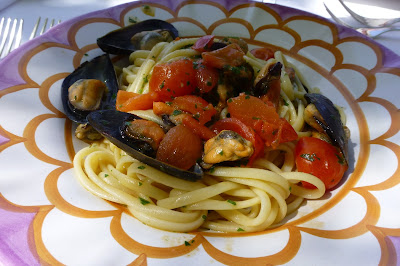 During lunch, we had a group discussion and decided that we would take a semi-private boat to Capri that was advertised through our hotel. It took 8 people around the island of Capri with lunch and drinks, and then dropped us off for 3.5 hours and took us back for 70 euro. We originally were a little shocked at the price, but after looking into it, we realized the ferry to Capri and back was over 35 euro and the island was so expensive that lunch and drinks would cost at least 15. Plus, if we wanted to swim we would have to pay to get to and on a beach, where the boating company promised to include a swimming break (at least another 15). The company would also pick us up and drop us off at the hotel. Ultimately the 5 euro difference was worth not having to plan anything and having a boat almost to ourselves (it ended up being the best decision we made all trip).


The rest of our day was spent shopping more, picking up snacks for the next day, and hanging out in Sorrento. There was one interesting experience--while walking back to the hostel, a guy on his scooter slapped my butt as he drove by and then circled back to blow kisses. Seeing as he was driving by quickly, it not only took me by surprise, but also hurt and left a mark. I knew Italian men were stereotypically aggressive, but I was not prepared for that! It ended up being a funny story, but it didn't stop me from yelling some aggressive (and the opposite of flirtatious) things back when he circled around. 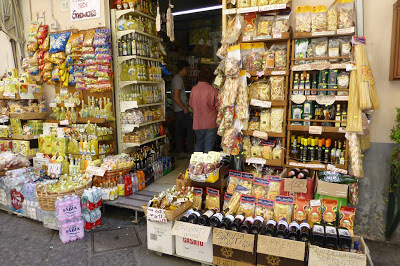 The next morning we were up bright and early to get picked up by our boat captains. We were already so happy that we chose this option, after the drive to the harbor was a treacherous, windy, and steep one-way road that would have been impossible to walk down. It also helped that our captains were both cute, young Italian guys named--seriously--Mario and Luigi (sorry, Scott!). The boat was fully booked for 8 people, so the five of us were also joined by a family from Greece. They were so sweet and interesting--they moved to Great Brittan because of the economy, so there young daughter had British accent, while they both had thick Greek ones. Throughout the trip they called us their Charlie's Angels. The second our boat motored off the dock, we all immediately got to tanning and enjoyed the amazing views of Sorrento and then Capri. 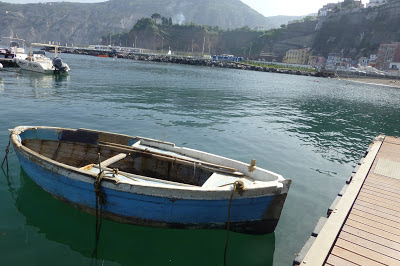 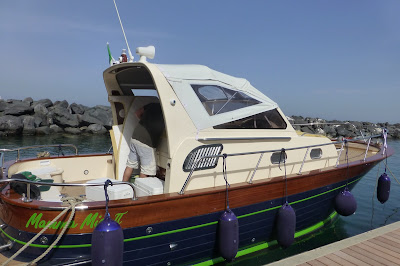 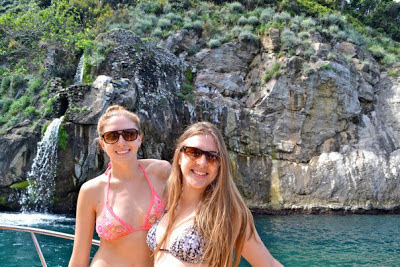 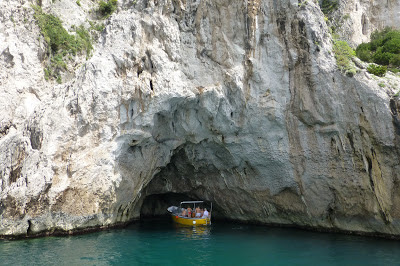 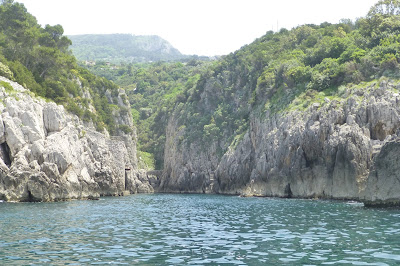 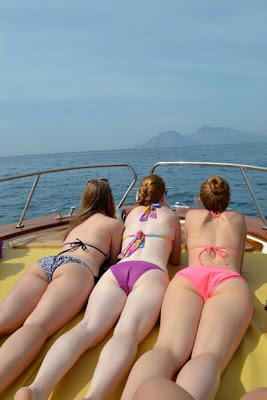 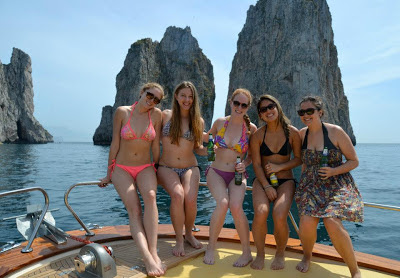 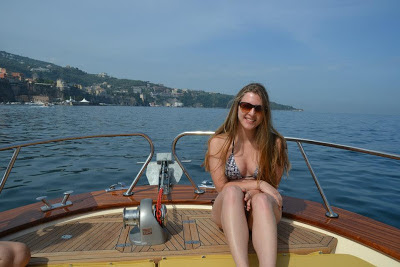 The boat took us to the white and green grottos, and then stopped in a little cove for us to swim. The water was freezing, but we braved it and got more excited than the 5 year old Sophia when they brought out pool toys. After we swam for a little, Mario brought our lunches and we ate and tanned in the sun. Lunch was caprese sandwiches that were simple, authentic, and amazing. The tomatoes especially were perfect (and if you know me, I am obsessed with tomatoes). The boat also took us to the famous blue grotto, but since it cost 12 euros, we felt we had already splurged too much that day to justify it. After 4 hours of sightseeing, tanning, and swimming on (and off) the boat, we pulled up to the Capri harbor with three hours to explore the island. 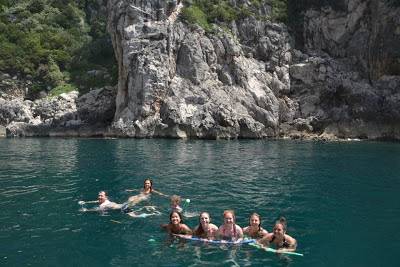 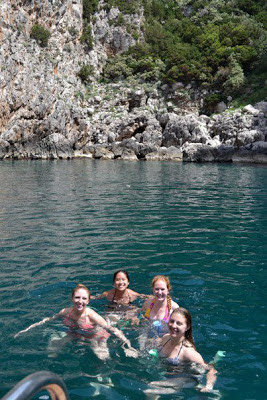 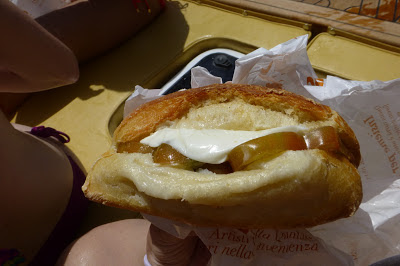 The main town was up higher on the island, but since there was a path that led to it, we opted out of paying for the bus to take us. The walk ended being much longer than we expected, and turned into a hike uphill. It's a good thing I loved the hot weather and the island is beautiful because it definitely could have been rough trek. Once we reached the top we enjoyed the view, window shopped at some very expensive stores, and grabbed some obligatory postcards. The heat was finally getting to us, so we stopped by a crowded stand to pick up some delicious drinks that were half fresh lemon slushies and half orange juice. The drinks were refreshing and cold and exactly what we needed. We wandered around more, grabbed some of the best gelato ever (Rome had the best fruit gelato and this had the best sweet flavors), and finally headed back to the boat. Our ride to Sorrento was only half an hour, but I was pretty sunburnt so I did the Jessica approved lay in the sun with a towel covering you method. 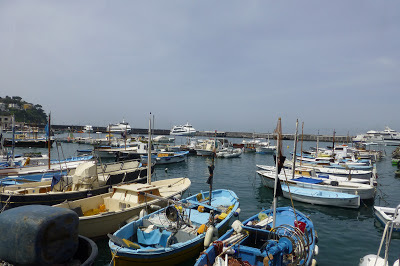 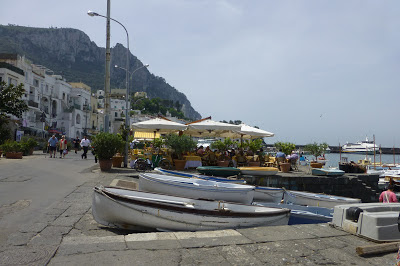 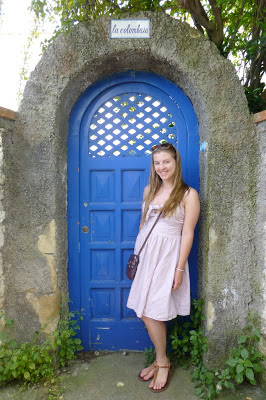 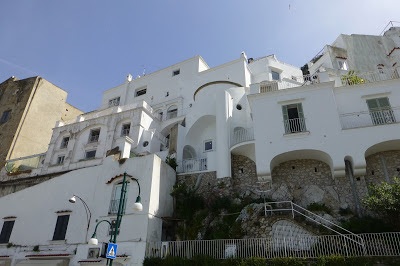 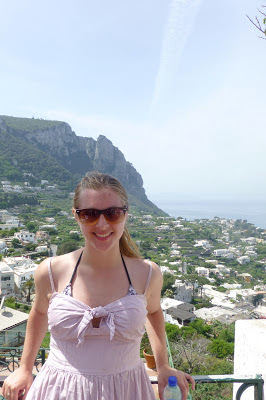 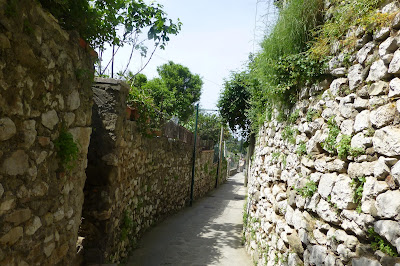 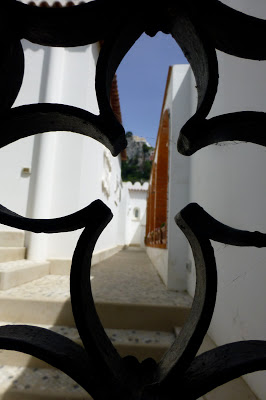 We ate the hotel barbeque dinner, showered, and contemplated going out until it started thunder storming. At that point, we resigned ourselves to some drinks at the hotel bar, and heading to bed on the earlier side since we were leaving for Rome the next morning. Sunday morning we ate the rest of our snacks for breakfast, and Diana and I ran to the market so I could pick up one last gift. The train was much less crowded this time, so we got to enjoy the views while sitting and relaxing on the way back. We actually had an hour in Naples between trains, and Diana and I decided to go out and look for a piece of Pizza. We were warned before that Naples "wasn't for everybody" by travel books and that it was the worst place in Italy from other study abroad students, but I was not prepared for how utterly dirty and unsafe it felt. We were probably in the worse place (hopefully), but trash filled the streets and piled in huge planters, and everyone started swarming the "tourists" (us). It's probably the most uncomfortable place I've ever been. Diana and I quickly headed back to the train station to grab lunch there, and were very happy to be heading back to Rome.

Sorrento and Capri felt like a vacation from our vacation. Just spending the day boating around Capri felt unreal--we couldn't stop saying how it felt like a movie and that we never imagined we'd be able to tan on a boat on the Amalfi Coast. Rome was incredible, and every sight exceeded my expectations. It was incredible walking around so much history, and everyday we had a full agenda of what we wanted to see. But, it was so nice stopping in Sorrento and Capri for two day where we didn't feel guilty for relaxing and sun tanning because we weren't missing out on hundreds of historical sights. It was the perfect way to celebrate the cold spring being over and relaxing after walking miles from morning to night in Rome. Plus by the time we came back, we were ready to tackle our last sight seeing to do list!
Posted by Watermelonsmiles at 9:30 PM