The best part about studying abroad was that Prague became my home for four months. It remained one of my favorite cities in all of Europe, and I kept falling in love with it as the weeks went on. I couldn't wait for people to come visit me so I could show off that I knew the public transportation system, recommendations for bars and restaurants, and the big sight seeing places.

Mid March
My roommate of two years (and soon to be three), Madison, was the first person to visit me in Prague. She stayed in a hostel with three of her friends from Florence where she was studying, and I met up with them that Friday. After mixing up the meeting place, I tried to redeem myself by taking them to Café Louvre for lunch. Most of us got a arugula salad with cranberry dressing and baked goat cheese for lunch. It was fantastic, and studying abroad has definitely created a love affair between goat cheese and me (see my trips to Paris and Italy). Since Café Louvre is known for it's desserts and drinks, we also had some hot wine and dorts (cake). I had a blueberry dort that tasted like a mix of cake and pie, and came with a little bit of vanilla ice cream. 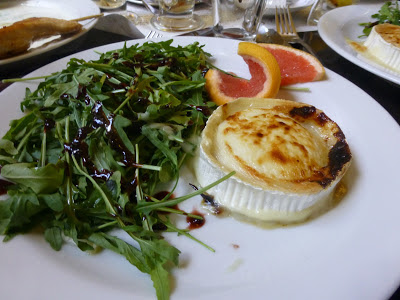 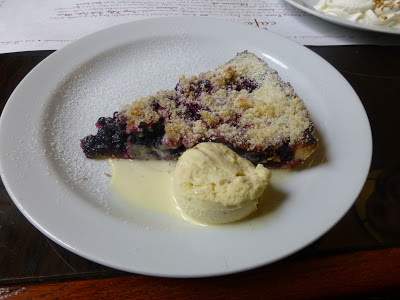 After warming up with our food, we went to have a quick look at Wenceslas Square and then walked to Old Town. The Easter Fair was going to start that Saturday, so we saw all the decorations and stalls getting put up. I had read in all the travel books that the Easter fair was a big event in Prague, so I was really excited to see it for the first time. We split up with plans to have dinner at U Kroku with some sorority sisters who were also studying abroad in Prague. I ordered my go-to Czech meal of goulash and dumplings and eventually our night ended at the bar U Sudu.

Saturday, I met up with Madison at the Lennon Wall where we grabbed some roomie pictures before looking around in Mala Strana for a place to eat. After lunch, we headed across the Charles Bridge and looked around the Easter Market. It was a ton of fun with window shopping, going to the very small petting zoo, and  grabbing some tredelnik (sadly, this one was average). 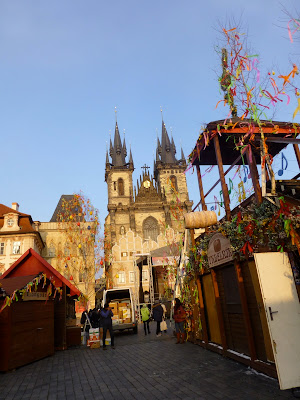 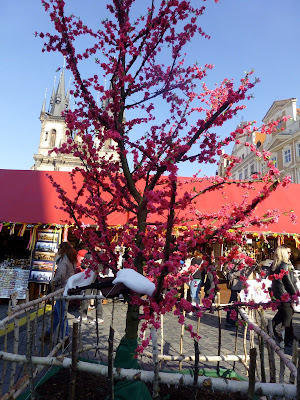 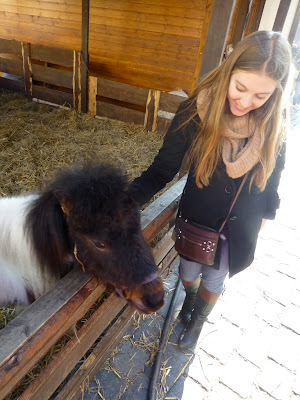 Another person in my program recommended we go to the bar at the Dancing House. While I've seen the building and walked by it before, I actually didn't know that you could go to the top if you bought a drink at the bar on the ground floor. We each grabbed a beer (Budvar) and enjoyed the views of the city. It was a great way to end our sightseeing part of the day. We had plans to go to the five story club and ice bar that night, so we parted ways to get ready. 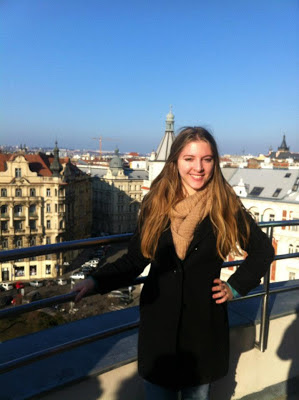 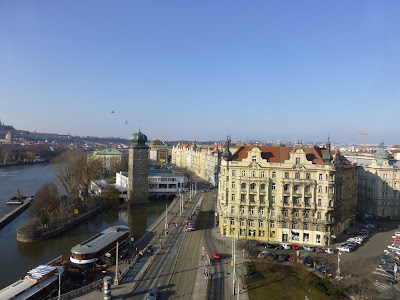 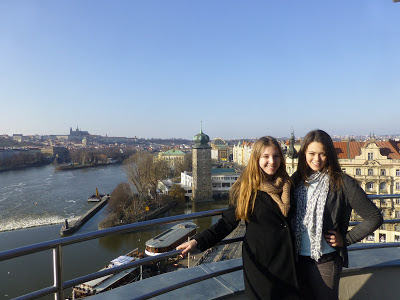 Once we met up again we had some beer (Fenix) at The Pub, and then headed over to Karlovy Lazne to go the ice bar. The Ice Bar is exactly what it sounds-everything from the bar to the walls to the cups to the seats (with some fur thrown over those) was ice. The employees give you jackets and gloves, and put you inside the room for 30 minutes with one free drink. It was my first time going, and I had a lot of fun and was happy to cross it off of my Prague bucket list. Madison and her friends said they were pretty cold inside, but I felt great (it may be because Prague got me used to the weather or it was my first time wearing a puffy jacket). Since the Ice Bar ticket included entry to all the other floors, we spent the rest of our night at the club (mainly on the Retro floor). It was a ton of fun dancing to songs from Greece, and hanging out with Madison. 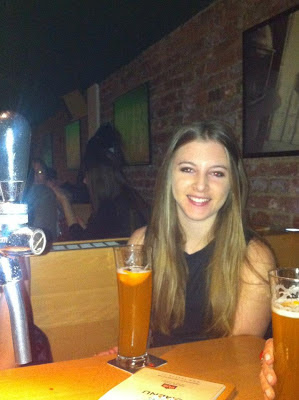 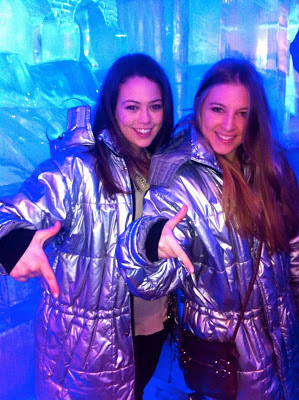 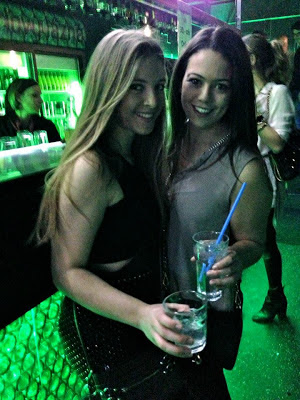 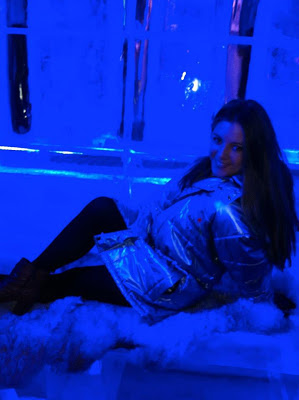 Everyone left the next morning, and I was so happy that Madison came to visit. It felt surreal that after talking about it for over a year, we actually were meeting up in Europe.

Early April
Allie also came to visit me from Paris. I was a little worried about how the weekend would turn out because I had two mandatory field trips o that Friday and Saturday from 8 in the morning to 5 or 6 at night. Luckily, Allie was really amazing about it and explored Prague on her own. Since she was staying at my apartment, she came over when I got home on Friday, and we went out for a typical Czech meal. We came back and skyped more friends from home, and went to bed on the earlier side around midnight. When I went to my second field trip, she explored the city more and we met up again for dinner with a bunch of USC people near Wenceslas Square. We debated for a second going out, but ultimately decided for McFlurry's and movies back at my apartment. Sunday morning, we had an amazing brunch of pancakes at The Globe, and tried to get some work done at my apartment. It was a super laid back weekend, and it was such a nice break to just relax with friends like we do back at USC and in Gamma Phi. 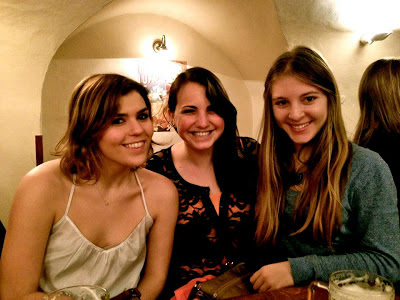 Last Week of March/April
Scott came to Prague twice--once with his study abroad program and another time for his last spring break. I already wrote about Scott's 5 day stay and all the great parts about it. The first time he came to Prague was for 4 days with his study abroad program. I met him that Tuesday night, and we went to U Sudu for a beer. Since it was my midterms week, and he had program stuff the next day we left around midnight and decided to Facebook when we were both free. Wednesday ended up being crazy for both of us (school with me and he'll have to tell you his story himself), but we met up on Thursday afternoon again. We hung out, and his trip leader was beyond nice and invited me to join the group on their boat cruise and dinner on the Vltava. It was really sweet, and when it was over, Scott and I hung out until it was time to go to Radost (the club where Rihanna shot her Please Don't Stop the Music music video).

Friday, we met at the astronomical clock at noon--an idea which seemed a lot better the night before since all the tourists and people at the fair where crowded around the area. Luckily we found each other, and hung out around the Easter fair. We got some food and looked around before packing up Scott's stuff from the hotel. We had a flight to Paris at 6 so when we got back to my apartment, I quickly packed up my things, and we made our way to the airport. 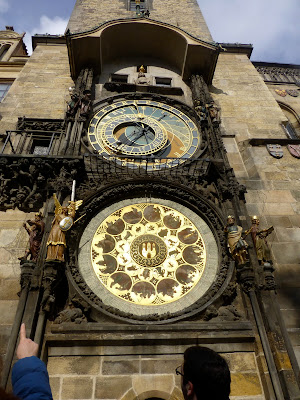 I wish my family also could have come visited because I know I would have had a ton of fun showing them around. But, having friends, roommates, and Scott come to visit made Prague feel even more like home and was a ton of fun.


Posted by Watermelonsmiles at 10:56 PM