Ok, so I wasn't technically on the set, but I started and finished my run behind it. So, no you will not find me in the background of whatever episode they were filming. You'll have to look for my sweaty running self elsewhere.  Ali and I went for a quick run (we were under a time constraint since I had to pick my brothers up from the beach around the same time) on the strand this morning/afternoon for a little over 2 miles.
I didn't bring anything with me on the run, so I didn't have my camera to take super close pictures of the set, but I got some quick ones from my car. There are always a few shows filmed in the summer around here, and last year there were a few 90210 episodes being filmed. It's interesting to see how they build and take down the cabanas and shack all in one day. For any people who watch the show, I saw them filming a beach dance party so get excited?:) 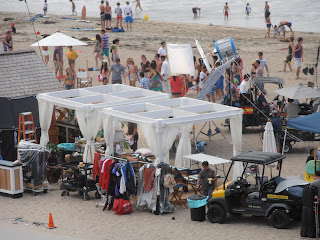 Speaking of running empty handed, today my brother found my ipod! I'm super excited to have it, but I've actually decided I'm going to try running without it for a little bit longer. This actually kinda shocks me, but I realized that I live in one of the most beautiful places to run. I feel like I appreciate it more when I don't have my headphones cranked up and I enjoy just zoning out when I run. And singing one line of a song over and over again... today it was Britney Spears.
I'm going to be heading back to USC in less than a month where I won't have anywhere to run, and I know I'm going to be constantly using my ipod there. I might as well take advantage of my being outside while I can.
Some food highlights of today included the best quick lunch ever. Since I've always been obsessed with Egg McMuffins, I decided to recreate one today. All I did was toast a bagel thin and make an egg and cheese sandwich, but for some reason it was beyond delicious. I want to make another one tomorrow, but we're out of bagels. I'll just stare longingly at this picture 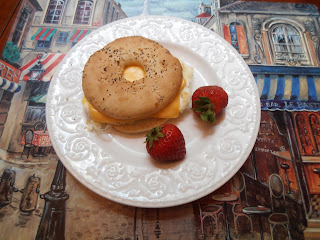 I also had the last Reese's Cupcake. I realized after my whole post yesterday of showing you guys my beautiful little creations, I never mentioned how I actually loved them. I adore them. They are delicious and beautiful.
And ends up are even better cold. Especially when I sneak a snack (and picture) at work.
We had a late dinner, so I also had a smoothie for a snack. I put in one banana, 3 frozen strawberries, plain yogurt, honey, and a spoonful of peanut butter. I love how summery smoothies feel (and how good they taste).
Time for bed! I seriously need to get to bed earlier. Maybe tomorrow? I'll just keep telling myself that ;)
Posted by Watermelonsmiles at 1:13 AM