Yesterday and today have been the most summery two days ever. Last night, I went to BBQ/bonfire with friends that basically screamed summer. We had all the summer foods: hot dogs, veggies, salads, and s'mores...all while eating outside. 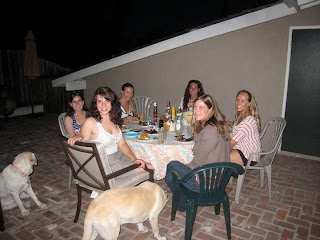 By the way, this is my absolute best friend Sarah. Being the great influence I am and with my persuasion (yes, I'm going to take credit for it),  Sarah has started her own blog just today. So if you're interested in fashion and adorable things (the dress I'm wearing in the picture and that I'm obsessed with is borrowed from her), you should check it out!

Today, was a beach day!


I was actually woken up this morning (unhappily) for a family, quick trip to the beach. We stayed for about an hour and half, and while my sister surfed and my parents went for a walk. I just swam with my little brother in the water after falling back asleep on the sand didn't work. It was actually my first time in the ocean since Hawaii, and it was a bit shocking diving under that first wave.  Luckily, it was really warm once I got used to it.

For breakfast, I had a piece of toast with peanut butter, cinnamon, and a little bit of brown sugar. It was delicious. I later made myself a simple bean and cheese burrito with chicken for lunch. Both pictures turned out very unattractive, so I'll follow my usual rule of making them a smaller size so no one will actually see them. 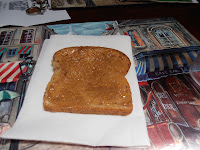 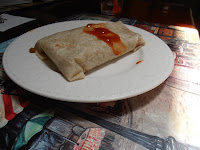 After heading back home and eating, I met up with Sarah to head to the beach for a second time. 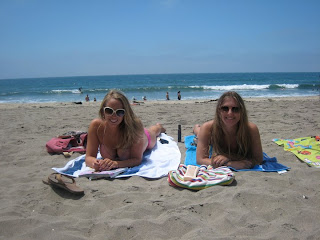 By this time it was much more crowded and we had to park a billion miles away. We tanned and went swimming for a few hours before deciding to go....to Yogurtland.
I'm a tad obsessed.
I'm counting all my walking around (and swimming) as my workout for the day or at least label it as an active hangout. I'm also grouping the 20 minutes I walked the dog into this too hehe.

For dinner, my mom made cheeseburgers which we served on bagel thins. 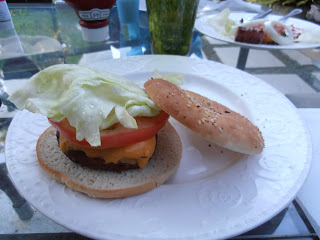 They were really good, and there was someone who was very jealous of our meal... 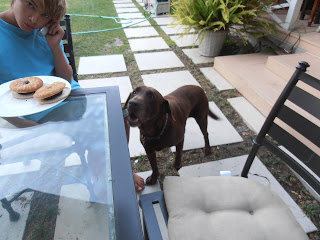 She made her rounds to all of us, and ended up being pretty successful. James was the worst at ignoring her puppy dog eyes.
I'm already loving July so much. Seriously, nothing can beat beach days (but tomorrow might come pretty close). I'm going to be up late at a concert tomorrow with Scott, so I'm heading to bed. Night!
Posted by Watermelonsmiles at 12:40 AM