Today, I did something unusual. I baked.
But first, I went on a run! And although I didn't go in the morning like I had planned hoped, I ended up going for a run with my friend Ali around our old high school. I have honestly no idea how long we ran since part of it was on a trail and I forgot to check the time (it was under 3 miles though), but I actually really enjoyed this run. I felt pretty strong throughout it.

What's weird is that I'm getting used to running without an ipod. While I would much rather (x10) have it with me so I could listen to my random workout playlist, it isn't as impossible as I thought. It's nice being able to actually think about random things and zone out. Or, you know, repeat the only line of a Nicki Minaj song that I know. Gah, I'm not even a huge fan, how did that happen?
I'm interested to see if I'll be able to keep my motivation without an ipod when I run solo tomorrow.

Ok, now back to me not baking often.
While I enjoy looking at all the delicious things people bake (too much) and staring longingly at desserts, I rarely ever attempt to bake it. Why?
1) I tend to be very lazy. I like my food to be easy to make or get, but still taste good. Which is probably why I'm obsessed with things like bagel thins. I want to have my cake and eat it too (without going through the process of actually making it). Yum.
2) I get grumpy in the kitchen. Like really grumpy... just ask my sister. If I am baking then I want to be the sole creator of whatever magnificent food I make (and if you tell me they're anything but magnificent I will bite your head off...I'm half joking).
3) There is always, always, some ingredient that I realize I don't have in the middle of my baking adventure. Like today I realized that you can't actually make any sort of frosting if you don't have powdered sugar in the house. Quick trips to the grocery store are never quick enough when you're in the middle of a project.
4) This may be food/healthy living blogger blasphemy, but I have a tendency to not be wonderful in the kitchen. I may have not fine tuned that domestic talent of cooking quite yet, but I still like to read recipes that make me think of all the great things I could make.

Luckily, I ignored all my usual reasoning and decided to make Reese's chocolate and peanut butter cupcakes. I was meeting with some friends tonight, and used it as an excuse to make dessert.
I got the recipe from the blog SweetToothSweetLife, and just followed her recipe. The only thing I changed was that I accidently turned the icing into more of a glaze which tasted delicious (but was a little bit messy). 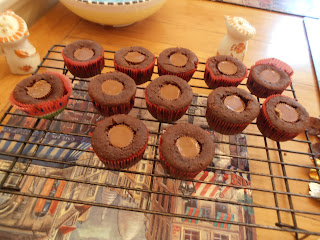 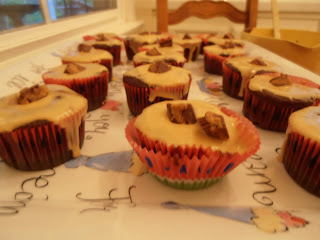 I love my watermelon cupcake liners! I knew I would use them eventually.

Yay for baking! And I guess running :)
Posted by Watermelonsmiles at 1:38 AM