My Saturday morning was spent exploring the neighboring hotels. The Kaanapali Alii, which is where we are staying, is actually a huge building full of condos. So while it absolutely beautiful and has great amenities (like the gym, pool, BBQ, and clay tennis courts that I want to try), it is pretty laid back in relation to some of the other Maui hotels. The Kaanapali hotels are all laid out on the beach next to each other so my family did a little exploring. 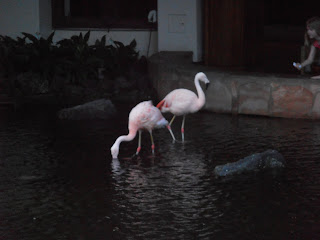 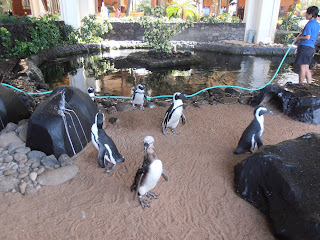 Our afternoon was spent looking for a beach to go snorkeling. We ended up not finding the exact one we were looking for, but instead ended in a secluded, amazing Napili beach. 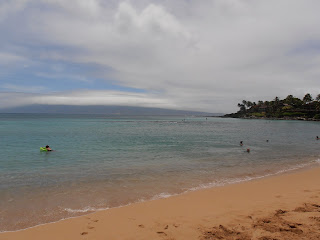 While there were no huge turtles I did see a lot of colorful fish and a lone angelfish.

That night we went to the Late Lahaina Luau. I’ll admit that when I first heard we were going to a luau, I wasn’t that excited. Don’t get me wrong, I wanted to have a luau in Hawaii experience but I just wasn’t expecting it to be fantastic.
It. Was. Incredible.
We were instantly given leis and flowers and a drink (fruit punch for me…dislike being under 21) that smelled and looked super pretty.


We had a little down time before dinner was served, so we walked around the area. It was right on the beach and so so pretty.

Dinner was beyond delicious. It had so many foods that I’ve never had before (what’s up octopus?) and everything was incredible. Sadly, it did not look as pretty as it tasted (food can definitely taste pretty in case you were wondering) so you’ll just have to take my word on it. #bloggerproblems. 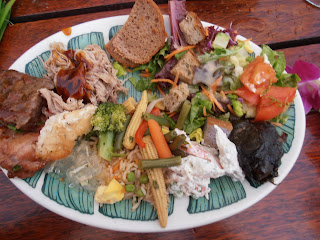 On my plate is steak, terayki chicken, pulled pork (cooked in the ground), ono fish, some kind of clear noodles, fried rice, steamed veggies, crab salad, pork wrapped in some kind of spinach, salad with taro bread croutons, and a little piece of banana bread. We were also given a bread basket with taro rolls and guava butter.
I’m usually the type of person to finish everything on my plate (not a good habit), but I came no where close to finishing this. I had at least two bites of everything to try it (including my sister’s octopus salad), but was too full at the end to even look at the remaining food.
We were also given another drink called the Melodramatic that tasted a little bit like Shirley Temple. 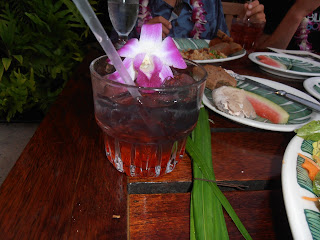 Dessert came right when our plates were collected and consisted of 4 sample desserts: coconut pudding, coconut dusted brownie, macadamia nut pie, and a chocolate cup with banana filling. I was still full so I had one bite of each (they were tiny), and only ate the little cup. 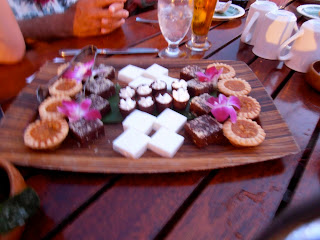 The show was really fun to watch too. I’ve decided I want my workout of choice to be hula dancing. 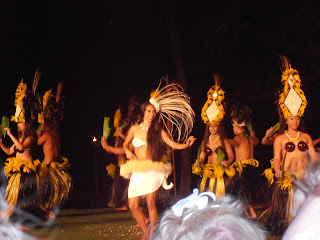 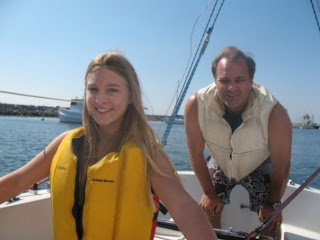 Posted by Watermelonsmiles at 10:20 PM

Email ThisBlogThis!Share to TwitterShare to FacebookShare to Pinterest
Labels: Hawaii