Sea turtles and Waterfalls (and tons of other stuff)

Highlights of the past few days:
-       Going snorkeling and swimming with sea turtles. Our family walked over to Black Rock Beach, a popular snorkeling beach. By the rocks, not only were there lots of fish, but two huge sea turtles that over 4 feet long and were eating the plants off the rocks. It was an incredible sight and the best part was they were completely undisturbed by all the snorkeling gawkers. They were so huge that they would actually swim at you and make you move (some kids actually got hit with it’s fin because they didn’t get out of the way). I swam and touched the shell of the turtle…which I later found out is not allowed.

jkjJumping off the black rock. The rock (which the beach is named after) is 15 feet high and a ledge where you can jump off into the water. While I would not say I’m scared of heights, I could definitely feel my heart pumping. I went first (between Jessica and I), and ended up doing it twice. Haha I was very proud of myself after. 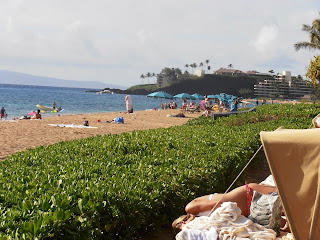 -       Swimming in the waterfalls in/on the way too Hana. We drove to the tropical side of Maui in search for waterfalls and various other sights like the Black sand beach. 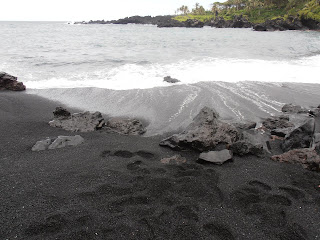 -       Our first waterfall we went to visit was beautiful, but we had heard there was an even bigger one just a short hike away. We trekked through the muddiest path ever, but came to a dead end. My family and I went back to the first waterfall to go swimming... my parents actually demanded that we did because we (especially me I fell on my butt at one point) were too dirty for the car.

The second one we swam in was one of the 7 sacred pools of Hana. It was amazing because while you
were swimming in the waterfall, you also had a close up view of the beach.

Workout news: ran 2 miles on the treadmill, did a few minutes of weights with 7.5 dumbbells while
waiting for a treadmill to open up and spent a large part of the day in the water
Ran 1 mile on the treadmill but didn’t feel great so I just took it easy and did easy weights with 5 pound
dumbbells.
I’m a little stressed because I’m scared that after working up to running 3 miles with no breaks before I
left, I’m going to loose all my progress through this trip. I am definitely staying active, but I have not
gone for a long run yet.

Food Highlights:
-       breakfast was bagel thins, scrambled eggs, and a slice of bacon with papaya 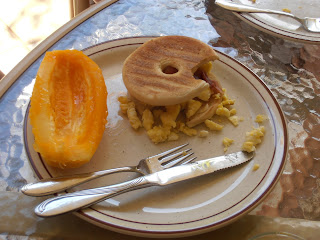 -       Lunch was a turkey sandwich with Hawaiian bread and cheddar cheese, veggie straws, and mango 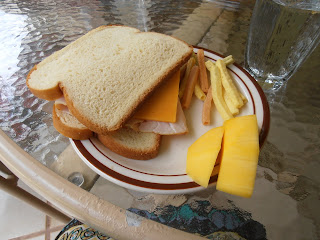 -       A cheeseburger at Cheeseburger in paradise (I forgot to take a picture but it was delicious)
-       Banana bread from a small random stand on the way to Hana. It was warm and amazing 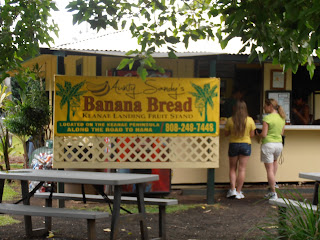 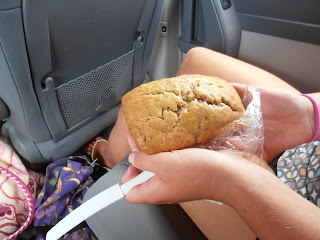 OiI was awarded the Operation Beautiful Award from Hannah! If you haven't seen her blog you should definitely check it out because she has the best recipes (they always are healthy and make me drool) with great photos, and always has such cheery posts.
SaSadly, my wifi time is almost used up for this session, but my next post will be for Operation Beautiful!

Posted by Watermelonsmiles at 11:36 AM

Email ThisBlogThis!Share to TwitterShare to FacebookShare to Pinterest
Labels: Hawaii