I woke up this morning with a headache (not in a sketchy way haha), so I decided to sleep in. Eventually I got up because (1)my sister and I share a room and she was being ridiculously loud and (2) I was starving.

I made myself a quick bowl(s) of cereal with the last of the milk. I haven't had my Honey Nut Cheerios in a while, so it was a nice break from my usual toast or oatmeal. 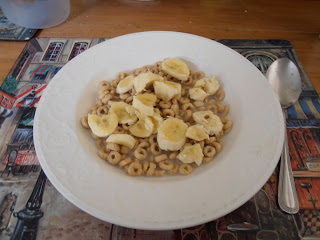 Since I had gotten up pretty late, I had my lunch just an hour or two later. I tend to be a creature of habit--if it's around 12 then I automatically get hungry. I just made myself a small peanut butter and jelly sandwich.
Sadly I still was feeling gross, and ended up going back to bed to take a nap and some advil. When I woke up I felt a lot better, and got busy on completing the main task of the day. Organizing and putting away this pile of clothes... 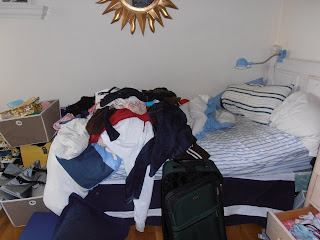 ... and then packing that small suitcase with stuff. It was not fun since I strongly dislike cleaning, and hate packing almost as much as I hate unpacking.
When I finished I rewarded myself by taking my little brother up to get Jamba Juices. He wanted to go because he had two gift cards, but it was a little disappointing when the combined savings ended up to be less than 50 cents. Our smoothies made up for it though! He got the Chocolate Moo'd and I got a small Caribbean Passion.
For dinner we went to a nearby pizza place to meet up with some family for an early birthday dinner for my Mom. It was really casual since on her actual birthday we are flying to Maui, Hawaii (I know some were wondering)!
My sister and I decided to entertain ourselves while we were waiting for food. Here's a pretty little picture story we made for you:
Tender moments with my family. And that last picture was a joke...I don't make faces like that in real life...too often. I'm taking a second to reward myself for my bravery of posting this for the public too see.
Dinner consisted of salad with Italian dressing and lots of toppings and pizza.
The 2 pizza slices I ate were mushroom and peperoni. I actually don't like meat on my pizza, but am obsessed with mushrooms so I just picked some of the toppings off and grabbed the pieces with the most veggie pieces. Here's the before and after shot. 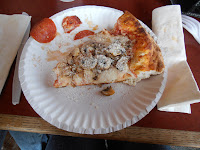 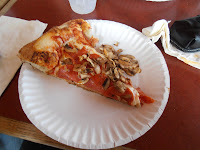 We ended the meal with some birthday cake. My grandma had brought some Angel Food Cake with a little bit of icing and strawberries, and served vanilla ice cream on the side. For a dessert, it actually tasted pretty light.
Even though I had some yummy food like the angel food cake and smoothies, I'm really missing the freedom of having/being able to make my own food. My family gets a little crazy about making sure everything is clean before we go on vacation, so having baking adventures in my house is a little bit of a no go for now. Sigh, I'll just look longingly at everyone else's food pictures :)

I ended my friday night by heading over to my best friend's house for some quality hang out time. Some unpictured, unhealthy snacks were also eaten, and I had a great time just hanging out and talking.

Happy Julia: having an abundance of pictures for this post, making ridiculous videos for friends at Sarah's house, Jamba Juice trip with my brother
Posted by Watermelonsmiles at 1:54 AM