I officially signed up for the Irvine Mud Run! I know I've been saying how I was going to do it for a few weeks now, but to be honest, I usually set fitness goals that go no where. I have a really hard time staying motivated, and I was hesitant to actually sign up.

I'm so excited that it's actually happening! I signed up for a 4 person team with Ali, her boyfriend Grant, and Scott.

Unfortunately, my procrastination had a few negative outcomes and I had to sign up for the afternoon race instead of the morning and the registration fee cost a little bit more. Oh well, now I know.

And since we were on the topic of running, today I went for a run with Ali. We decided to try a new running route since we have been going to the same places for a while now (the snake spotting might have something to do with our enthusiasm for a new spot), so we just drove a few minutes away to run along the road. It was about a little more than a 2.5 mile run once we ran to our turn around point and back. It wasn't the most beautiful scenery, but the halfway point did have a great view that made up for the rest.
Since I live in the hilliest city ever, the first half was an easy gradual downhill. However, the run back was super hard. Uphill with no flat or downhill breaks is no fun. We ran most of the way up, took a walking break, and since we were so close to Ali's car we decided to sprint the last leg of it. I haven't tried sprinting in such a long time, and I had forgotten how painful it is...I was very happy to get back to the car and relax.

Sad news though... my camera decided to break on me today. So instead of getting to see any food today I ate today (including the delicious fro yo I concocted...which looked very similar to this), you get to see how sad I am about this turn of events from photobooth the one camera I do have left. Who could resist this face...new camera, good sir?
And as an extra little present, I have decided to debut my famous sports bra tan line that I have been whining blogging about. I promise it's much more prominent in person. Yay for proof I've been working out more than usual! 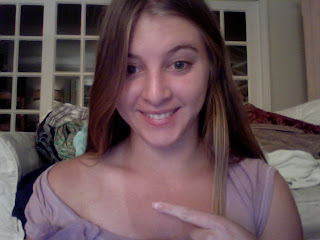 Tomorrow I'm going to look into getting my camera fixed because I definitely want it to be functional in Hawaii! Ahh it's going to be less than a week before I'm in paradise!

Happy Julia: seeing my best friend for the first time since spring break
Posted by Watermelonsmiles at 9:41 PM