So instead of going for a run this morning, I met up with some friends at the Original House of Pancakes for breakfast. By the way OHOP is very different from IHOP (i.e. much better).

I ordered banana pancakes that came with tropical syrup. Unfortunately, my camera died right when I took it out to take a picture, so you'll just have to squint your eyes to see what they looked like from this one picture I found. The pancakes weren't actually as good as I had hoped, but they were still yummy. I wasn't able to finish all of them though, and didn't bother bringing them home.

After breakfast/brunch ended, my ride (I came with my friends Sophie and Angie) took a small detour to Joann's. Have I ever mentioned that I am helpless when it comes to craft stores? Last time I was at Micheal's I made some random purchases. The second I walked in the door today I knew I would be leaving with some useless adorable things.

Maybe I'm not as bad as I think because I did get one thing I needed. I know it's bad, but I don't use a water bottle. When I was living on campus, I could count on the fact that every time I went to the cafeteria I would drink at least a glass or two of water. Now that I'm at home I realized I barely drink any... like seriously some days I realize I drank just a single cup of water. This little habit is bad because I am really prone to headaches. So my solution was a cute, orange Tumbler that I had to swipe off the shelves.
The rest of my purchases were a tad ridiculous. I've realized I can't resist anything that has watermelons on it... check out my link above and you'll see what I mean. I was WAY too excited to buy watermelon cupcake holders and watermelon drink umbrellas. Together they were only a little more than $3 so I wasn't splurging too much.

Here's a picture of my goodies:
And here's a picture of how excited I actually am about them:
Later, I met up with Ali again to go on a pretty easy run around the neighborhood. After our tough run yesterday, we decided to do the walk/run that we had done the other week. We walked the beginning downhill (I get paranoid of shinsplints when I run steep downhills) and ran on the fire trail to along the golf course, and then walked up the cul-de-sac of hell (super uphill), ran through dirt field area, and walked back to her house.

After we got back we hung around for a little bit, and did some sit ups to the one and only Kanye's Workout Plan. Get them sit ups right and tuck your tummy tight and do your crunches like this.


For dinner, I just had a turkey cheeseburger with a whole wheat bun. For dessert, I had a yummy Trader Joe's frozen yogurt popsicle. It was the last one so I had to quickly claim it...there is no time for pictures in dire situations like these. 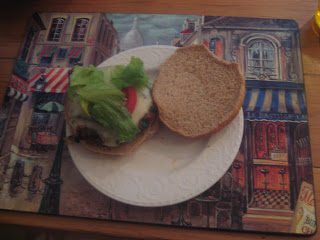 I'm going to attempt to go to bed early tonight because I'm going for an early morning run (hey, 8:00 is early for me).
And is anyone else a little too in love with Joann's or Micheal's like me? I love hearing what other people buy there:)

Happy Julia: going to Joann's, looking at my new tumbler/water bottle, feeling like a wild person when I ran through the field, knowing that the BF liked the care package, figuring out the details of the mud run (more info coming soon)
Posted by Watermelonsmiles at 9:17 PM