Today I woke up bright and early to workout to drive my brother to high school. Apparently he needed a ride this morning, and I had to wake up an hour earlier than I planned to do it. I was not in the best mood because it was just one of those days where you bed is super comfy and your pillow is just perfect. So once I was back home, I crawled back into bed and pushed back the time I was supposed to meet Ali to 10:00. Still counts as a morning workout!

We decided to run at the beach on the strand (a sidewalk that runs along the beach) and started at Torrance Beach and ran to the Redondo Beach pier and back--a little over a 3.5 mile run.The strand has markings every quarter mile, and the run to the pier was about 1.85 more or less. After running to the pier, Ali and I turned around to head back. We walked for a half mile and then ran the rest of the 1.25 to the end. I was a little disappointed that I didn't run the whole thing through, but we still ran the equivalent of a 5k which is a good start to preparing for my goal.
I'm surprised at how I can already feel myself get a little bit sore, but that's probably because when I worked out at USC I stuck to machines like the elliptical, and if I went running it was a consistent 2 miles. Another thing that really surprised me is that I have a HUGE sports bra tan line from just today. I was outside (including non workout time) for only a little over an hour and I have a very noticeable tan that did not match my cute outfit haha. Oh well, I am excited that it's officially become the season of tan lines.

After my workout I rinsed off, and got ready to go meet my dad and grandpa at the country club for lunch (my grandpa is a member). I ordered the "Club 3301" which was basically a toasted sandwich with turkey, bacon, lettuce, avocado, tomatoes, and other yummy stuff. It was so good, but it was huge and I ended up giving some to my grandpa. Excuse the bad picture, it was taken on my phone which has really bad quality. I don't have a smart phone, so this is actually the best I could take. 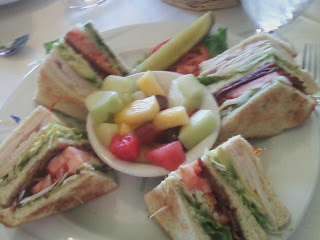 Jessica had her AP test today so I took her to Yogurtland after (which she ended up paying for...whoo! sister with the job pays). I love frozen yogurt! Their cinnamon graham cracker flavor is so good. I get tons of flavors and toppings when I go since it's a serve yourself, so I also got a little bit of strawberry, strawberry cheesecake, and vanilla. Then lots of fruit, few cheesecake pieces (I always get 5 pieces because I can't resist them), and some butterfinger powder (ish).
And I know that sounds like an insane amount, but I promise it wasn't that much and it's is totally worth my obsession.
Exciting news: Only 2 more days until I see Scott!

Ok that's all the exciting parts of today, and it's late. Night!
Posted by Watermelonsmiles at 11:51 PM