I Stop for Cake

Head's up this post is going to contain more food than usual, and most of it will be very boring average daily food pictures.
After waking up super late (in case you haven't realized, I'm not a morning person), I got up and made myself chocolate oatmeal with peanut butter. Best. Oatmeal. Ever.
For the most part, I truly dislike watery oatmeal so this picture may not appeal to everyone. It also looks a little uninteresting but chocolate and peanut butter is such a good combination. 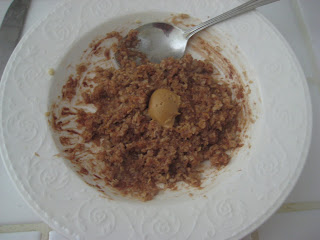 For lunch I had a Everything Thomas Bagel Thin with Trader Joe's whipped cream cheese and a green apple. I also snagged a bite of my brother's quesidilla, but I had to be sneaky so that went un-pictured. This lunch is given the most boring photo ever award, but bagel thins are the best so it's ok. 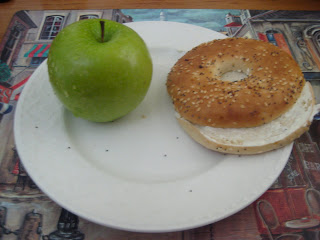 So one of the fun parts about today was helping my brother Johnny work on his extra credit project: making a geometric cake excluding squares, rectangles, and triangles. I know, best extra credit assignment ever. So our (cough mine) idea was to make a stop sign since it is an octagon. My mom, Johnny, and I worked together to make a two layer red velvet cake with white frosting and cake crumbs on top. Johnny got the honors of writing the word STOP on the top with more icing... a task which ended up being a lot harder than he expected (Cake Boss makes it look so much easier). But it ended up pretty good for a math cake.
I'm not including any recipe because it was just boxed red velvet and regular icing and I didn't get an actual slice so I can't go on and on about how good it is like I usually do.

Ends up the day kinda crept up on me because before I knew it, it was already 4:15. I babysat at 5:30 today and really wanted to squeeze a run in, so I just took Roxy for a quick 20/25 minute run around the neighborhood. I sprinted even faster after though to shower and gulf down a salad my sissy made me before I went to babysit.
PS.. isn't salad that you didn't make yourself infinitively better? For some reason, it feels like a chore if I make myself salad, but if anyone else does it I find it delicious. Oh that's just me? Cool.

I used to babysit for this family for years before I went to college, and I was actually really excited to see them all again; they are so cute! So I was a big sucker and let them--and me--have a big bowl(s) of ice cream for dessert after my dinner of dinosaur mac n cheese. I ate with them because I'm not the type of person to only eat a salad, bagel thin, and oatmeal for my main courses (I also don't mention my snacking on here).

So I've decided that since I'm blogging mainly for myself to track how I'm trying to be healthier and since I post every day, I'm going to include a little personal touch at the end of each entry. This blog is in no way, shape, or form meant to be a diary, but I thought it would be nice to just post short reminders of something that made me smile today as just a way to reflect with a more positive outlook.

Happy Julia: waking up to a very excited and happy text <3, having Johnny insist that I help him bake, the little girl I babysit getting excited to see me
Posted by Watermelonsmiles at 12:48 AM