Blogger was being dumb yesterday and was down so todays post will contain lots of food pictures from today and yesterday. I just started this blog, and I already didn't know what to do with myself when it was down and when I temporarily lost my posts. I can't imagine how annoying it must of been for people who have been blogging for longer.

Yesterday was my last day at work, and I'm sad it's over! The job search officially begins tomorrow. Woo! Actually I hate job searching, I always feel really awkward asking for an application or if they are hiring. Oh well. But I took advantage of my last day of business casual outfits (my favorite), and wore my brightest happiest dress! It's a Calvin Klien dress that I got on sale at Macy's. I usually wear shoes to work too, but I seemed to have lost them during this photo.
For lunch I went home and ate a simple salami and provolone sandwich, apple, and sandwich. 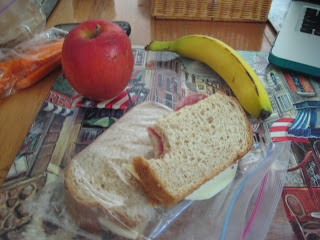 When I got home my sister and I took Roxy for walk around the neighborhood. My Mom then came home from Costco with tons of goodies including rotisserie chicken, bagel thins(!), and clementines. My family is over obsessed with Thomas bagel thins, and we all had them for dinner. My brothers literally had at least three each.

I decided to make dinner with the Everything Thomas Bagel Thins, so I made BBQ Chicken Pizza bagels. I used all my creative abilities (haha joke I'm not super creative) and used BBQ sauce, mozerella cheese, and pieces of rotisserie chicken. I put it in the microwave until the cheese melted and then I ate it. Happily.

I held off eating another bagel for as long as I could while everyone ate them all around me, but eventually I decided to grab one for dessert with nutella and strawberries.
This morning started off great because I got to sleep in to 11 this morning! I've been getting up pretty early for the past week for work or for finals, and it was so nice to sleep in with absolutely no set schedule. After lounging around the house for a little, I finally decided to call my good friend Ali to go for a run. Ali went to my high school and also is a freshmen at USC with me. She actually lived in the same dorm as me, so we've become work out buddies. Which is good for me because she gives me the motivation to actually get off my butt. After months of having our only running option being a 2 mile loop around the USC campus (aka not the most scenic route),  coming home to run was actually fun. We went on about a 3 mile run or more, but we took walking breaks to talk.
After our run we headed back home (did I mention we live only about 2 minutes apart?) to take our dogs for a walk. Both of them had given us big puppy dog eyes when we left without them in our running clothes, so we thought it was only fair. Luckily, Roxy and Jeter (her dog) got along really well and played together at the elementary school down the street. Since we walked them at 7:00 there was only few people there and we could let them off the leash.
I really wish I had brought my camera because they were so cute together. Next time I will remember too! After I got back to the house, I was starving and starting to think about what I was going to do for dinner.
I have a confession: I do not cook. I occasionally will bake, but I just never have really put that much time into learning to cook. My parents have tried to get me to learn, but I never was interested in high school because my mom's cooking was always so great and healthy on its own. Tonight, I decided I would make my own dinner--even though it's nothing fancy (just pasta actually), I was pretty proud of my own initiative in the kitchen.

I made stir fry pasta. I made one scrambled egg into very scrambled pieces and set it aside. I then used two tablespoons of olive oil to saute chopped squash and onion, and then added pasta in a little bit later. After turning off the stove I put some pieces off chicken and the scrambled eggs in the pasta. I added a few drops of soy sauce and some garlic salt to finish it off. I felt like such a little chef...especially when I added a few little details to make it picture worthy.
Good night, everyone!
Posted by Watermelonsmiles at 2:21 AM